A hydrogen fluoride release could have had deadly consequences 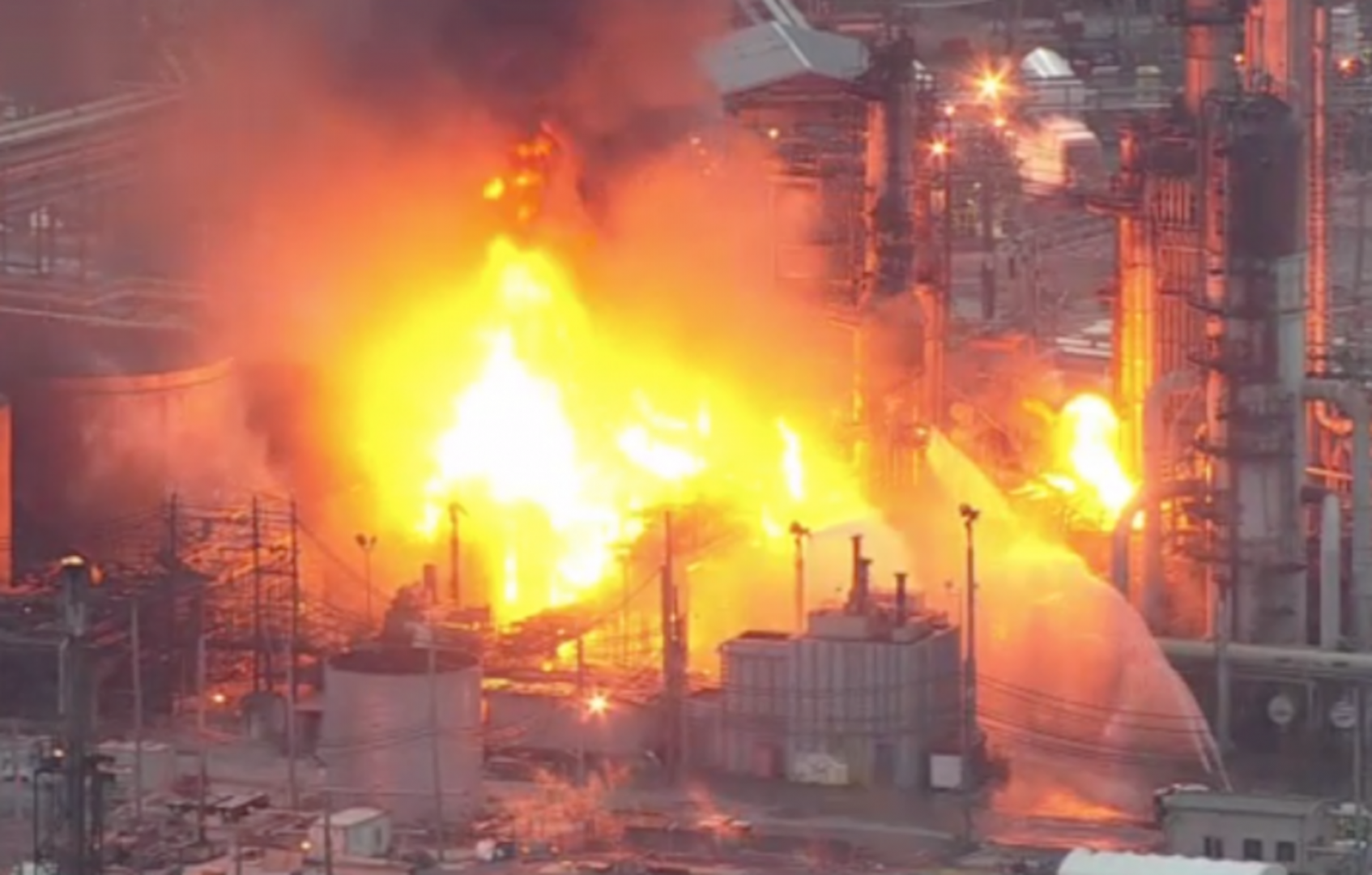 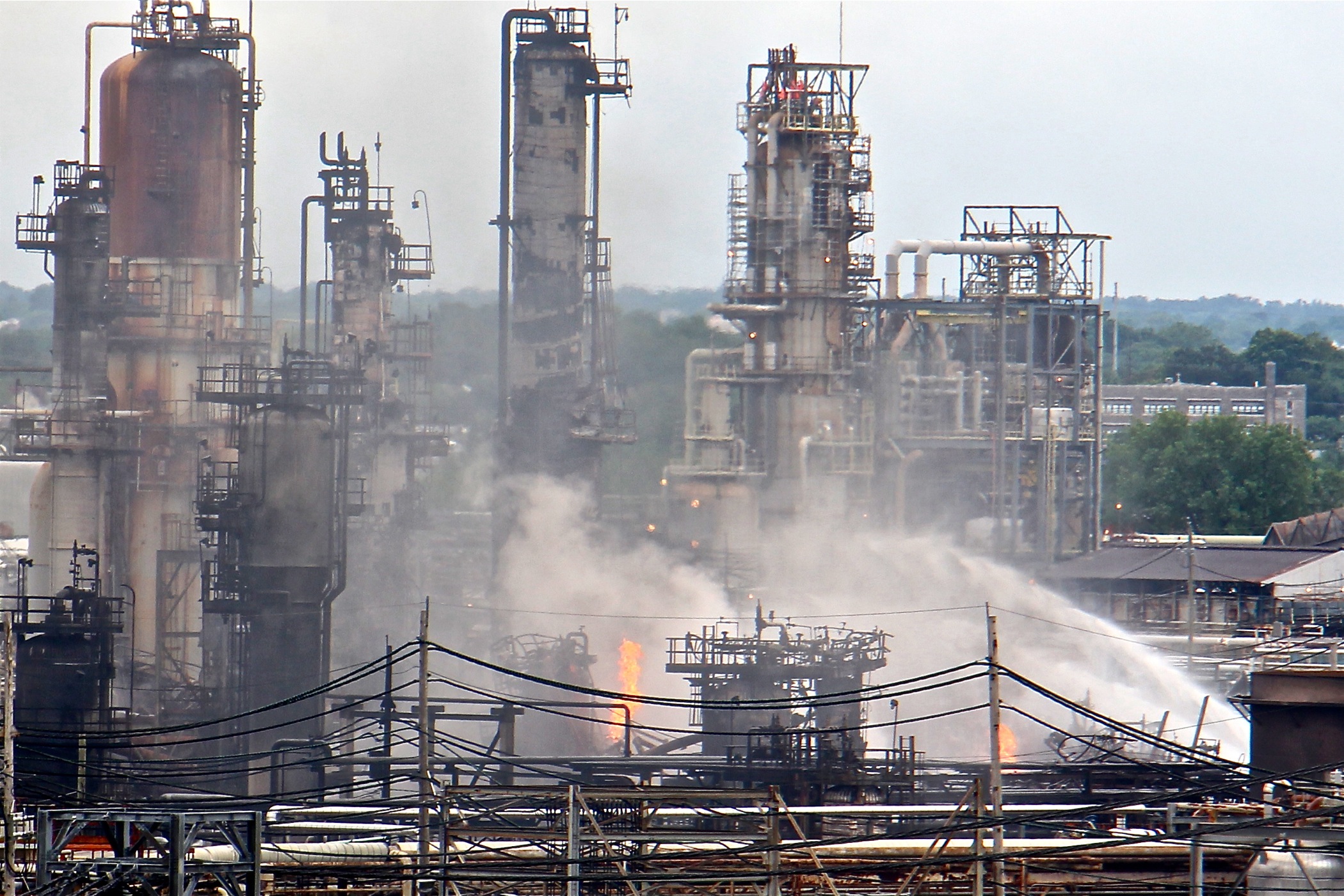 A fire burns at the Philadelphia Energy Solutions refinery hours after a series of early morning explosions on Friday, June 21, 2019 at the 150-year-old industrial complex at 3100 W. Passyunk Ave. (Emma Lee/WHYY)

Investigators from the Chemical Safety and Hazard Investigation Board who are investigating Friday’s refinery fire in South Philadelphia say their report will include recommendations aimed at preventing future incidents.

Kristen Kulinowski, interim executive of the independent agency, said staff will be interviewing people involved and poring over documents to present a “detailed and fact-based report” of the fire at Philadelphia Energy Solutions.

Kulinowski said those recommendations could be aimed at the company or regulators.

“Wherever we see a gap that could have contributed to the incident or exacerbated the consequences of that incident we try to close that gap with a recommendation,” she said.

The explosion and fire took a day and a half to extinguish and destroyed the alkylation unit that turned crude oil into gasoline. The former Sunoco refinery includes two facilities, Point Breeze and Girard Point, which together had the combined capacity of processing 335,000 barrels of crude oil a day.

Four employees were injured in the accident, so the Occupational Safety and Health Administration is also investigating.

Many say the impact could have been far worse. That’s because the unit that blew up used the dangerous chemical hydrogen fluoride, often referred to as HF. Kulinowski said the Chemical Safety Board has investigated incidents involving refineries’ use of hydrogen fluoride in the past, and will be doing so in this case as well.

“We are going to be looking at where the incident initiated and what happened afterwards to see if there was a potential for release of HF,” she said. “We’re not hyper-focused on HF, but we’re really looking at all the factors” involved.

Hydrogen fluoride is used as a catalyst in the refining process to turn crude oil into high octane fuel. If released, it can form a vaporous cloud leading to death or severe injuries like blindness.

The Chemical Safety Board criticized Exxon Mobile’s outdated equipment and poor safety procedures for a 2015 explosion in Torrance, California that could have led to a release of toxic hydrogen fluoride, also referred to as hydrofluoric acid.

Residents of the area have been pushing to ban HF.

“Everybody knows including industry that if you build an alkylation unit today, you don’t put in an HF unit,” said Sally Hayati, an engineer who is active with the Torrance Refinery Action Alliance.

PES spokeswoman Cherice Corley said the company is cooperating with the Chemical Safety Board to investigate the fire.

“PES and a third party continue to monitor the air quality inside the facility each hour, with all readings including HF remaining at normal levels,” Corley wrote in an email. “As previously reported, air monitoring in the surrounding community was conducted, and all readings were normal.”

John Jenchur, a professor of practice at the Colorado School of Mines, said refiners have two choices in the process of turning crude oil into high-octane gasoline – hydrogen fluoride or sulfuric acid.

“Alkylation is a reaction that will take two different types of molecules with four carbons, put them together, and now you have this eight carbon molecule,” Jenchur said. “It’s kind of like doing polymerizations to make plastics, except you stop at just the first reaction and that’s it, you’re done.”

Sulfuric acid has a higher boiling point and therefore is less likely to vaporize in case of a fire. But it also requires a lower temperature to catalyze a reaction and involves a more elaborate cleaning process to maintain the equipment.

That’s why about 50 refineries across the country use hydrofluoric acid instead. It catalyzes at room temperature and is straightforward to use. But it comes with serious risks, as it vaporizes easily and can travel far if it leaks, putting people in surrounding areas at risk for lung and skin irritation and even death.

Kulinowski, from the Chemical Safety Board, said they will also be asking questions about a fire that occurred at the PES refinery on June 10.

“Whenever we see multiple incidents occurring in close succession we do take a look at that because we are concerned that it would indicate a pattern of something that’s wrong in a company that needs to be fixed,” she said.

She said it may take up to 18 months for the detailed report, but said there may be information released about the incident before then.

“We will come back to the community with facts and analysis so this type of incident won’t happen again,” she said.