A Penn State researcher is taking part in a major effort between the U.S. and United Kingdom to better understand a section of the west Antarctic ice sheet that’s at risk of collapsing.

Thwaites Glacier is roughly the size of Pennsylvania and has the potential to contribute significantly to global sea level rise — an issue of critical importance to coastal communities around the world.

Sridhar Anandakrishnan, a professor of geosciences at Penn State University, recently returned from a research trip to Thwaites, where he and other scientists are trying to get a better handle on how fast it’s melting. Thwaites is close to one-and-a-half to two miles thick in places.

“It’s just an enormous amount of ice in this one glacier,” he said.

Scientists are projecting about two to two-and-a-half feet of sea level rise in the next century, but Anandakrishnan said Thwaites could add another three feet on top of that.

For example, two feet of sea level rise would flood eight to 10 blocks of northern Atlantic City, New Jersey according to a sea level rise viewer published by the National Oceanic and Atmospheric Administration. An additional three feet would flood most of the city. 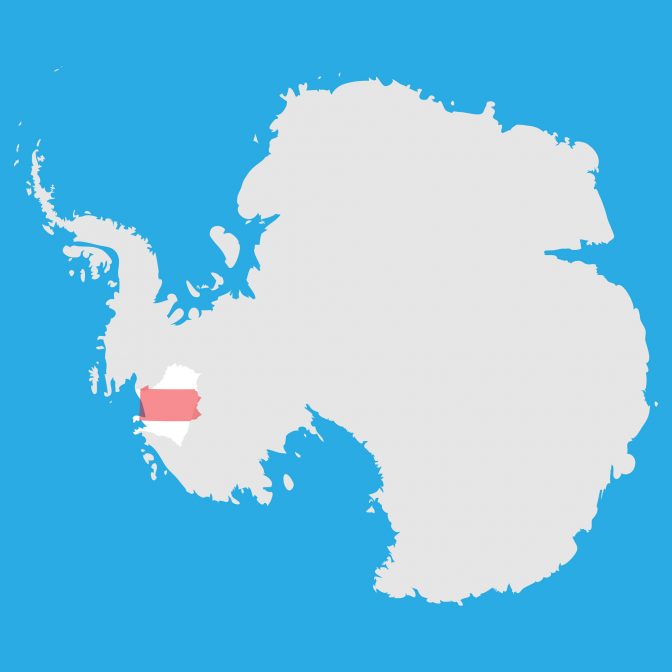 Thwaites Glacier (in white) overlain with a red map of Pennsylvania.

Satellites have shown the glacier changing rapidly, but it’s in such a remote part of Antarctica that it’s difficult to study. The nearest permanently occupied research station is about 900 miles away. The four-person team he was with this past season lived in tents atop the glacier, to gather better information to plug into computer models.

“The problem they’re all suffering from is a lack of data from the actual condition at Thwaites and the ocean out in front of Thwaites,” he said of the models. “So, people have made guesses.”

He added that three feet of sea level rise from Thwaites is the worst-case scenario. It could only add a few inches, but that’s why having better data is of critical importance as communities plan for climate change.

“Is it a foot? Is it two feet? Is it three feet? It makes a huge difference for communities around the world.” he said. “The rise in sea level in Antarctica is not confined to Antarctica. It will raise the coastlines of New Jersey and Philadelphia as well.”

The focus of his recent work on Thwaites is to drill holes through the ice shelf and put instruments down to measure the circulation of the water underneath, to better understand how the glacier is interacting with the ocean. He worked with Kiya Riverman, a glacial hydrologist and postdoctoral scholar at the University of Oregon, and Mike Roberts and Andy Bond, two experienced mountaineer guides who helped the scientists navigate the treacherous terrain.

“This area is quite badly crevassed,” said Anandakrishnan “Within a few kilometers of our camp there were massive holes. Their job was to survey the area and make sure that that the places Kiya and I wanted to go do our work were safe to travel.”

Riverman had been on two previous Antarctic fieldwork trips, and said the team had a week of great weather, which allowed them to get most of their work done, but that was followed by four days of a pounding storm, which kept them stuck inside their tents. She estimates the winds may have reached 75 miles per hour.

“It was the first really big storm I’ve experienced in Antarctica ,” said Riverman. “I definitely had moments of curling up inside my sleeping bag imagining what could happen, but at some point that isn’t productive.”

Overall, she felt safe and trusted the mountaineers. “Sometimes we can do work from space with satellites and from the comfort of our chairs, but some measurements you just have to be on the ground. It’s worth the four of us going out there and having a rough couple of weeks to get these measurements, which will shape the science for decades to come.” she said. “I believe in this work, so even if it does push me to my limits sometimes, I will keep doing it.”

The National Science Foundation and the United Kingdom’s National Environmental Research Council announced last year they were joining forces on a $25 million, five-year research initiative at Thwaites involving nearly 100 scientists from around the world.

Pennsylvania’s had a lot of tornadoes this year. But scientists don’t know if there’s a climate change link