Trying to keep bats flying in the face of an epidemic 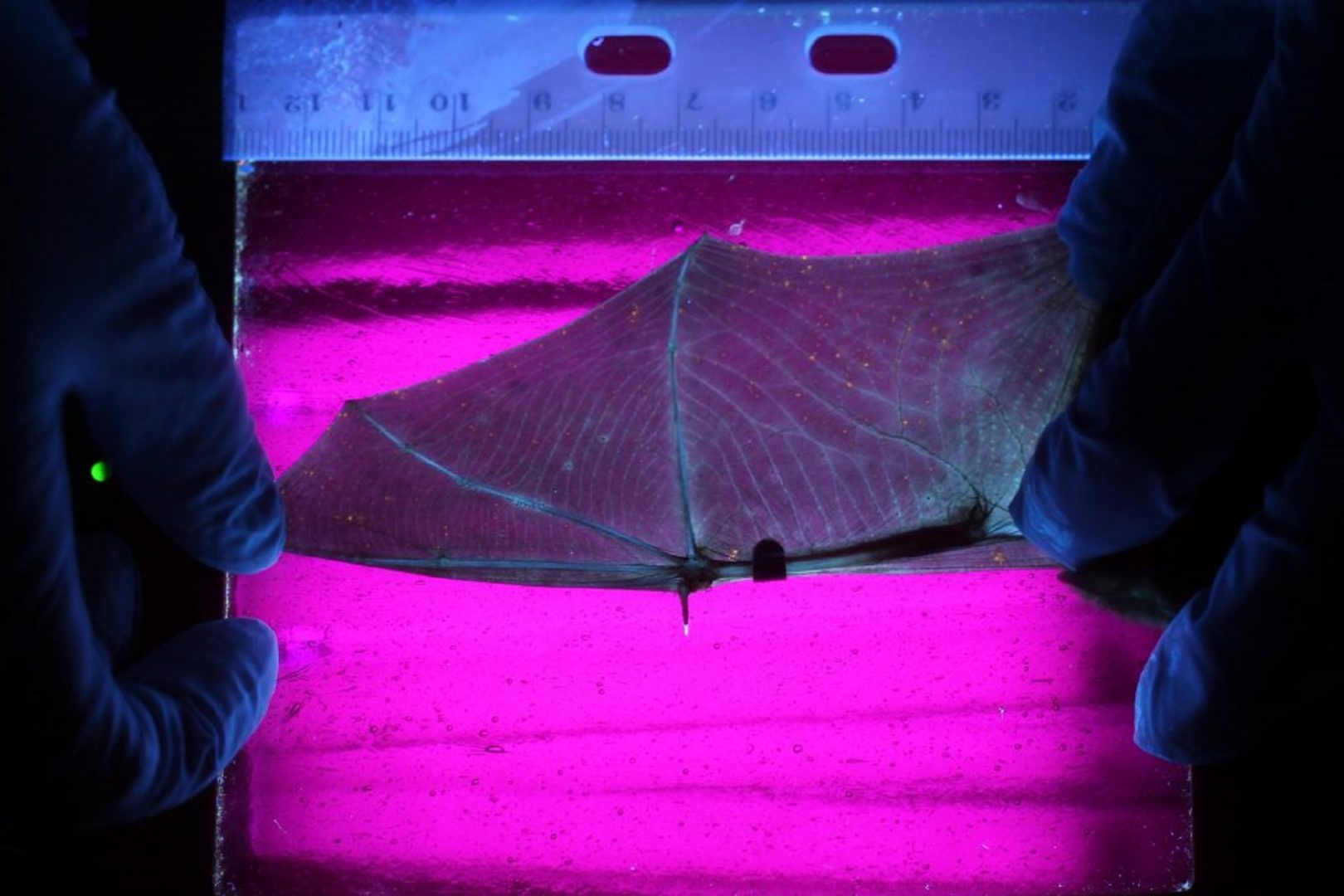 Inside an abandoned railroad tunnel in Central Pennsylvania, Greg Turner is up on a ladder holding a long pole, picking little brown bats off the ceiling as if they were fruit.

It’s mid-March and the bats are still hibernating. Turner, a biologist with the Pennsylvania Game Commission, is with a team of Tyvek-suited researchers testing whether a common chemical can help these creatures survive the epidemic of white-nose syndrome.

LISTEN: “Trying to Keep Bats Flying in the Face of an Epidemic”

One by one, he prods the resting bats with the fabric tip of the pole, and eventually, they latch on with their claws.

He then lowers each bat onto a net held by the team waiting below, who then place the bats — still in a state of torpor — in paper bags.

It’s the first time Turner and his team get to see how these bats are doing, after they treated the tunnel with an anti-fungal agent they hope will beat back the fungus that causes white-nose syndrome.

An Epidemic Pushes Some Bats to the Brink of Extinction

Bats help farmers — and the rest of us — by eating about a million bugs a year, per bat, Turner says.

But because of white-nose syndrome, there are fewer of them these days. In Pennsylvania, the disease has pushed three species to the statewide endangered list — the tricolored, the Northern long-eared bat, and the little brown bat. 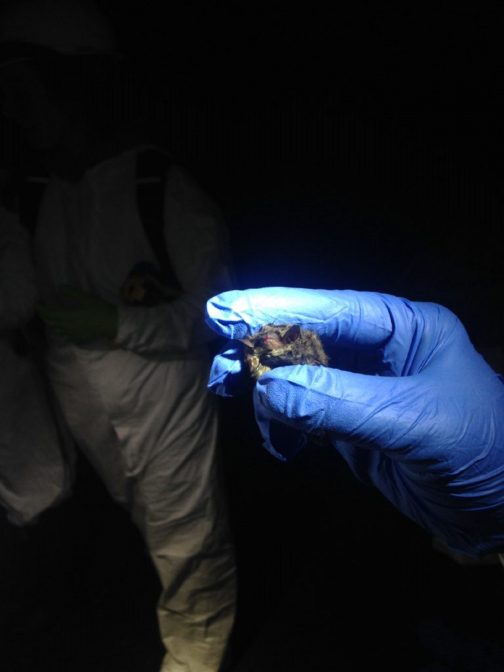 Some bats in this tunnel had less signs of infection from the fungus that causes white-nose syndrome. Photo: Reid R. Frazier.

This railroad tunnel has become a refuge for little brown bats, tiny mammals that can weigh as little as six grams — the weight of just two pennies. In the tunnel, they cram together in groups of two or three in cracks and divots along the walls, their heads smaller and flatter than a mouse’s.

“We always say the size of an eraser on a pencil, if you have a crack that big, the bat can get in there,” says Turner.

White-nose syndrome is caused by an invasive fungus — pseudogymnoascus destructans — or Pd. Brent Sewall, one of the lead researchers on this project, says the Pd fungus probably came to America from Europe or Asia around 2006.

“The most likely scenario is that some somehow it hitched a ride on somebody’s caving gear,” says Sewall, a biologist at Temple University.

European bats are resistant to the fungus, but American bats aren’t. The disease has hit some species hard. 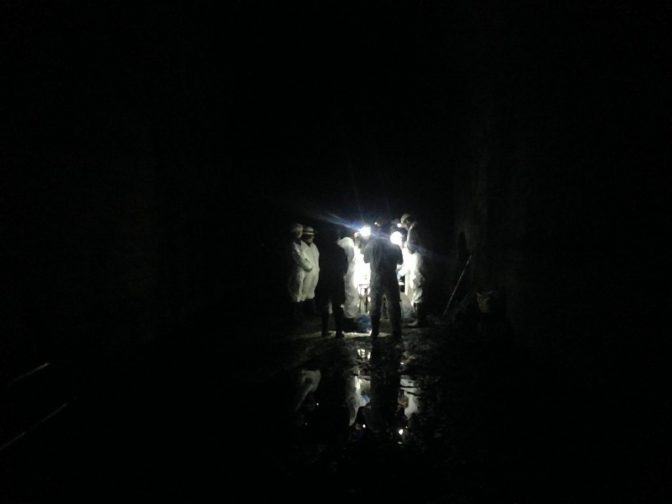 “We are just seeing massive declines,” Sewall says. “Whereas you might have seen tens of thousands of bats previously might go to the same exact site today and only see tens of bats.”

Marianne Gagnon, a PhD student of Sewall’s, says the way it attacks bats is through hibernation.

“Their whole hibernation is basically disturbed and disrupted,” says Gagnon. “The bats are going to arouse more frequently than they should. That means they’re going to go through their fat reserves a lot more quickly than usual.”

This can lead to death. In some bat populations, the mortality rate is 99 percent.

Trying to Ward Off White-Nose Fungus

Scientists are trying lots of things to help bats. Some are working on vaccines or using UV light to treat bats. This group is trying something else.

It doesn’t kill the fungus. Instead, it tricks it into thinking there’s a drought, so the fungus spreads more slowly.

“PEG basically tricks the fungus into thinking it’s water-stressed,” says Turner. “It then doesn’t want to germinate. If the bats are crawling around and pick up spores that are treated, those spores won’t germinate.”

The idea is to slow the infection to give the bats a better chance to survive the winter.

“We want the bats to evolve and deal with this on their own,” Turner says. “We don’t want to be treating all kinds of sites all over the state every year. Our goal is just to find something that can break that cycle, give them a leg up and give them that chance to make it through and persist.” 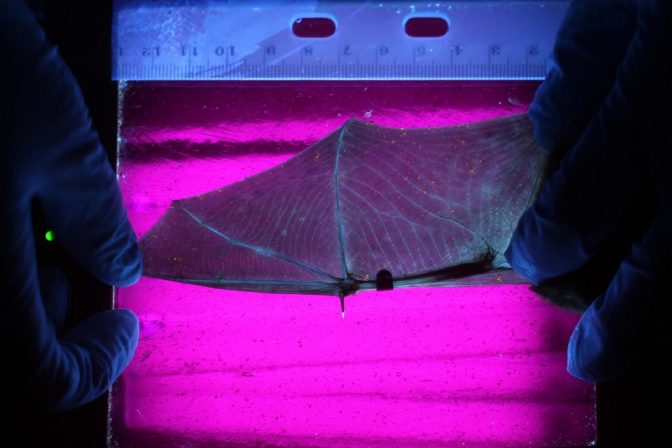 The idea came from a student of Barrie Overton’s, a biologist who studies fungi at nearby Lock Haven University. Overton says the treatment is just like spraying a field with insecticide.

“We’re not treating the bats — we’re trying to lower the environmental reservoir of the pathogen,” Overton says. “Just like you do in an agricultural setting, because you can’t stop wind from blowing in a pathogen from a neighboring farm that didn’t spray.”

Overton says they also want to see whether these treatments will have negative impacts on the state’s native fungi. Overton wouldn’t want to disrupt the microbial ecosystems of Pennsylvania’s natural caves.

“A cave that formed after the last Ice Age, that’s a record of microbes that were around when the cave formed,” Overton says. “So we don’t necessarily want to treat those natural areas,”

But tunnels like this one — abandoned during the 1940s — were only created in the last century, so they could be fair game. 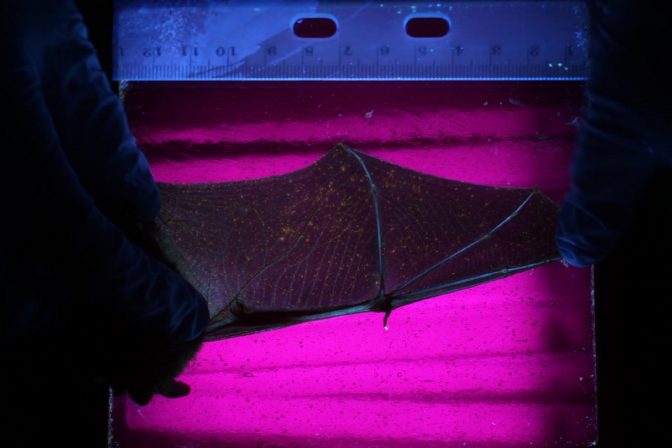 “There’s plenty of abandoned mines and plenty of railroad tunnels in Pennsylvania that we could treat that could help get the population of bats up,” Overton says.

A Glimmer of Hope?

After collecting the bats, the team weighs and measures them, then swabs them for DNA of the Pd fungus.

Sewall and Turner then photograph their wings under UV light. If there is white-nose fungus on a wing, it will glow orange under the light. The orange is actually iron being pulled from the bat by a chemical secreted by the fungus.

Some of the wings have orange splotches on them — signs of white-nose. But some look okay. At one point, Brent Sewall points one out to Barrie Overton.

Sewall says he’s never seen a bat with so little orange on its wings this late in the hibernation season. Overton leans over to examine.

Turner says that overall, he’s encouraged by what he’s seen in the tunnel.

“The vast majority of them seemed to have less infection,” he says. “I’d put it equivalent to like mid-season, so they probably did have a slight delay on getting exposed which is what we were kind of going for.”

Turner says he’ll start analyze his data when it comes in, in the next few weeks.

As the team wraps up, Turner holds one of the last bats by its wing and lets it hang until it starts flapping its wings. Then, he lets go.

The bat takes off down the dark tunnel. If all goes well, it will leave the cave in a few weeks, safe from white-nose for another summer.