Louis Charlier of Beaver Area High School is participating in the first student bootcamp hosted by Duquesne Light and the Community College of Allegheny County. 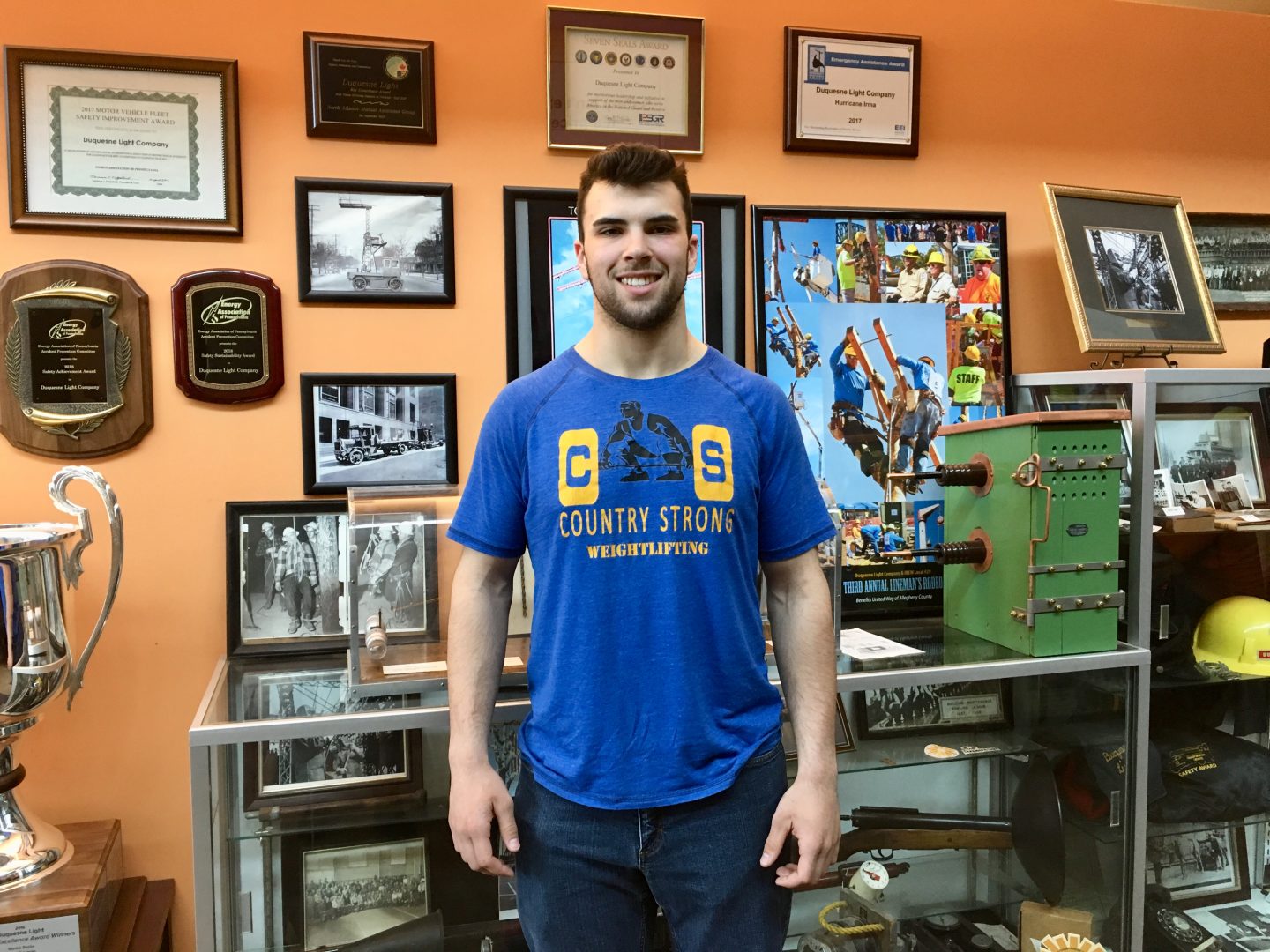 Louis Charlier of Beaver Area High School is participating in the first student bootcamp hosted by Duquesne Light and the Community College of Allegheny County.

At a Duquesne Light facility in Pittsburgh, 10 high school students hunched over sheets of paper, pens in hand, as they sketched their dream homes.

“I’m just drawing an A-frame house with a garage on the side, a nice front porch,” said Louis Charlier of Beaver Area High School on a recent Thursday.

The students had to draw their homes from three separate angles: straight on, from the side and a bird’s-eye view. This was a lesson on blueprints, something they will become familiar with if they pursue careers with the electric power company.

The teens arranged their schedules to take this class for a few hours each afternoon for several weeks as part of Duquesne Light’s new student bootcamp.

The bootcamp is a new effort by Duquesne Light, which serves Allegheny and Beaver counties, and the Community College of Allegheny County to prepare students for the Construction and Skilled Trade Selection System exam. Passing the test is the first step in applying for a skilled trade job at the company.

The camp could help shape the next generation of workers tasked with keeping the lights on. New workers for electric power companies and other utilities like natural gas and water are in demand across Pennsylvania and the rest of the country.

The PUC estimates 28 percent of the state’s utility workforce will retire in the next five years.

With them goes institutional knowledge that needs to be passed along to new workers, Brown said.

“You need those people to provide for that bridge, that transition to train them,” she said.

While the situation is a challenge for utilities, she said it’s not dire. The PUC keeps close tabs on utilities’ performance to ensure that outages don’t become too frequent and that response times are reasonable.

“We want to make sure you have the appropriate skilled, trained personnel on-hand to deal with providing that reliable service,” Brown said.

Gregg said Duquesne Light has experienced the same retirement trend as the rest of the industry. Its training programs have helped to replace those workers.

Each year, as many as 24 people go through the 10-month electrical distribution technology program at CCAC, which prepares them for careers at Duquesne Light. They could work in the power supplier’s operation center or have a job that takes them into the field installing and repairing lines and other equipment associated with the company’s electricity systems. 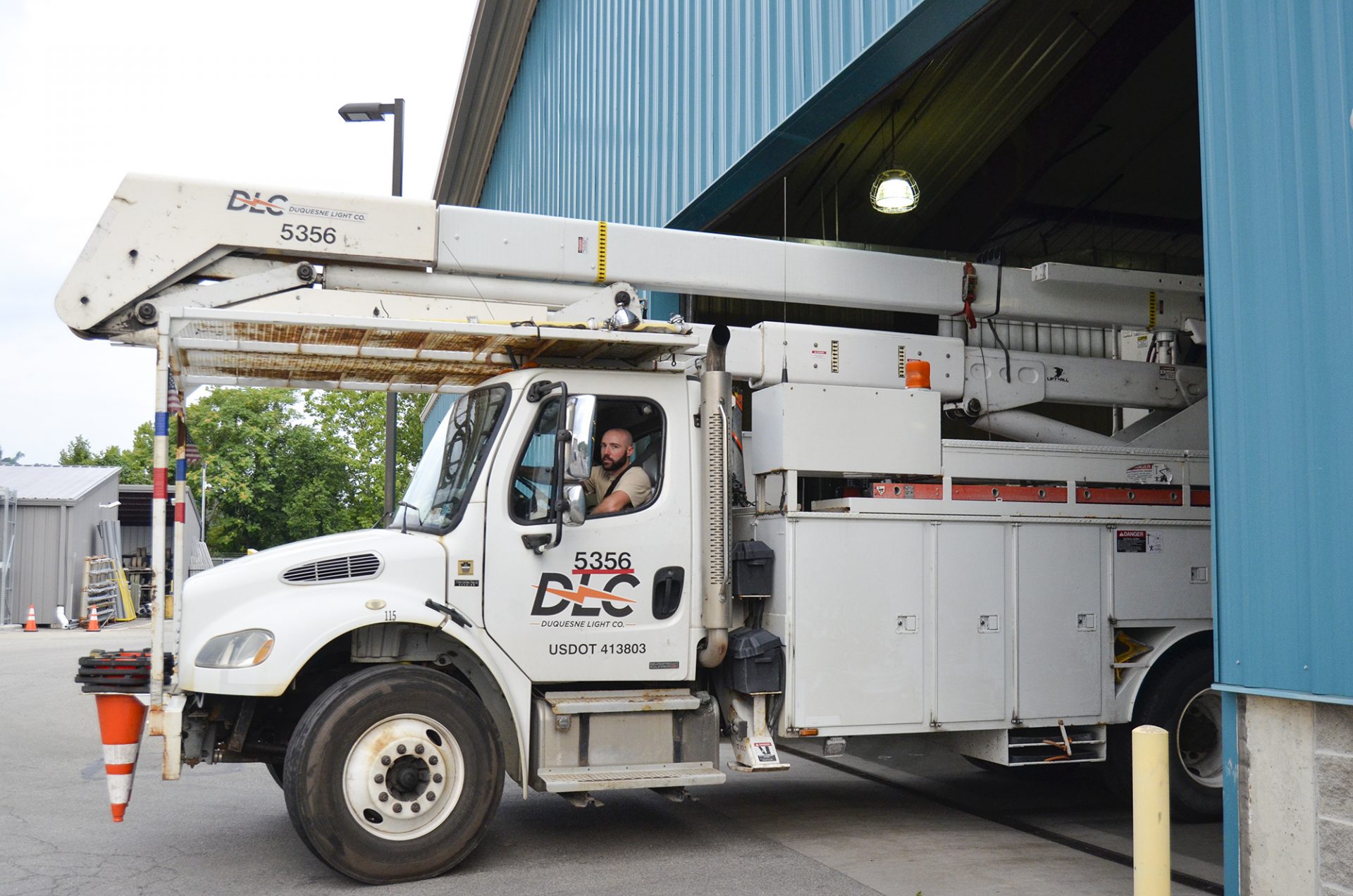 Duquesne Light is assisting with drivers education training for bootcamp participants who do not know how to drive. If the students pursue careers with the power utility, they may need to drive bucket trucks, like this one pictured at the utility’s Preble Service Center in July 2018.

Duquesne Light plans to host another bootcamp this summer for high school students, who could go on to the CCAC program when they graduate. The power company is also holding a similar bootcamp for high school teachers.

“If teachers don’t know about the positions or some of the technical things that are out there for their students, they’re not able to talk to their students and share those experiences,” said Debbie Killmeyer, dean of workforce at CCAC.

It was a teacher at Charlier’s school who heard about the bootcamp from a Duquesne Light employee, and suggested he apply.

Charlier said he does not want to go to a traditional college.

“I’d rather just go straight into the workforce, do a trade or something along those lines,” he said.

On Day 2 of the camp, something Charlier heard from one of the company’s executives caught his attention.

“He told us that this job opportunity would be like having a $3-million lottery ticket,” he said.

That’s how much the students could make over the course of their careers if they work for Duquesne Light. Gregg said the starting salary for crafts-related jobs at the company is $65-$85,000, plus overtime.

“There’s plenty of jobs out there that pay really well and you don’t need a 4-year-degree for, and these jobs are needed,” Charlier said.

Power companies from Duquesne Light to First Energy to PECO are active in recruiting new workers, running programs and internships to give prospective employees hands-on experience.

The PUC is working on this issue too, having launched a utility careers campaign to promote the industry to young people, military veterans and others by talking up the positions at job fairs and other events. Brown said the PUC has involved a number of state agencies, schools and utility companies in the effort.

“I was realizing the magnitude of the retirement of our workers in-house, and I said let’s reach out to our utilities because I’m assuming they’re dealing with some of the same things,” she said.

For people considering utility careers, the next step after the Construction and Skilled Trade exam could make it or break it: pole school.

“A lot of people come in and they don’t realize if they’re scared of heights or if they’re able to climb to the top of a pole and then be able to work with their hands,” Gregg said.

Charlier’s not too worried. He’s looking forward to the challenge.

“I did well on all the practice exams, so I feel like I’m going to pass that test,” he said. “I feel like I can climb a pole.”

Why is a few degrees of warming such a big deal when it comes to climate change?