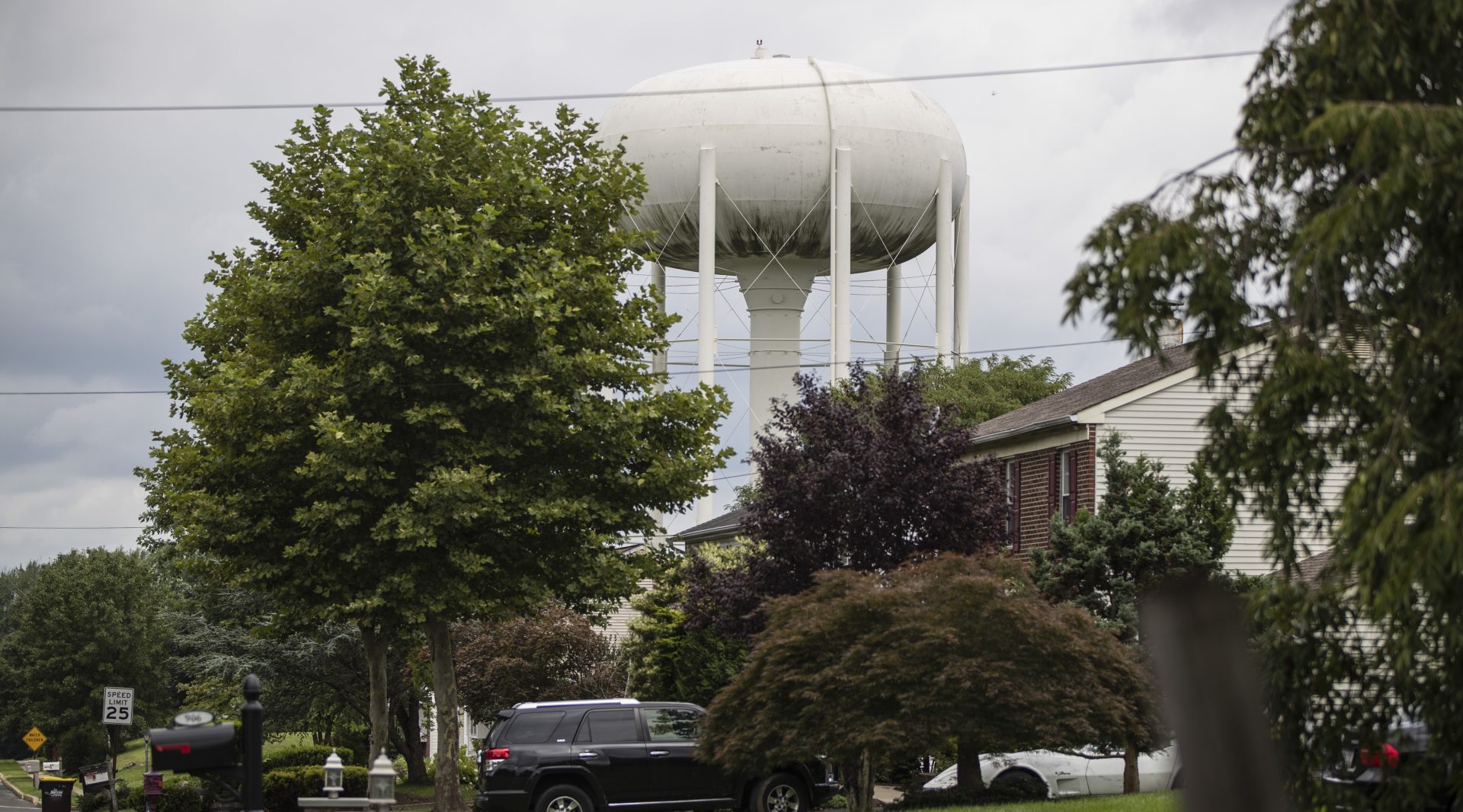 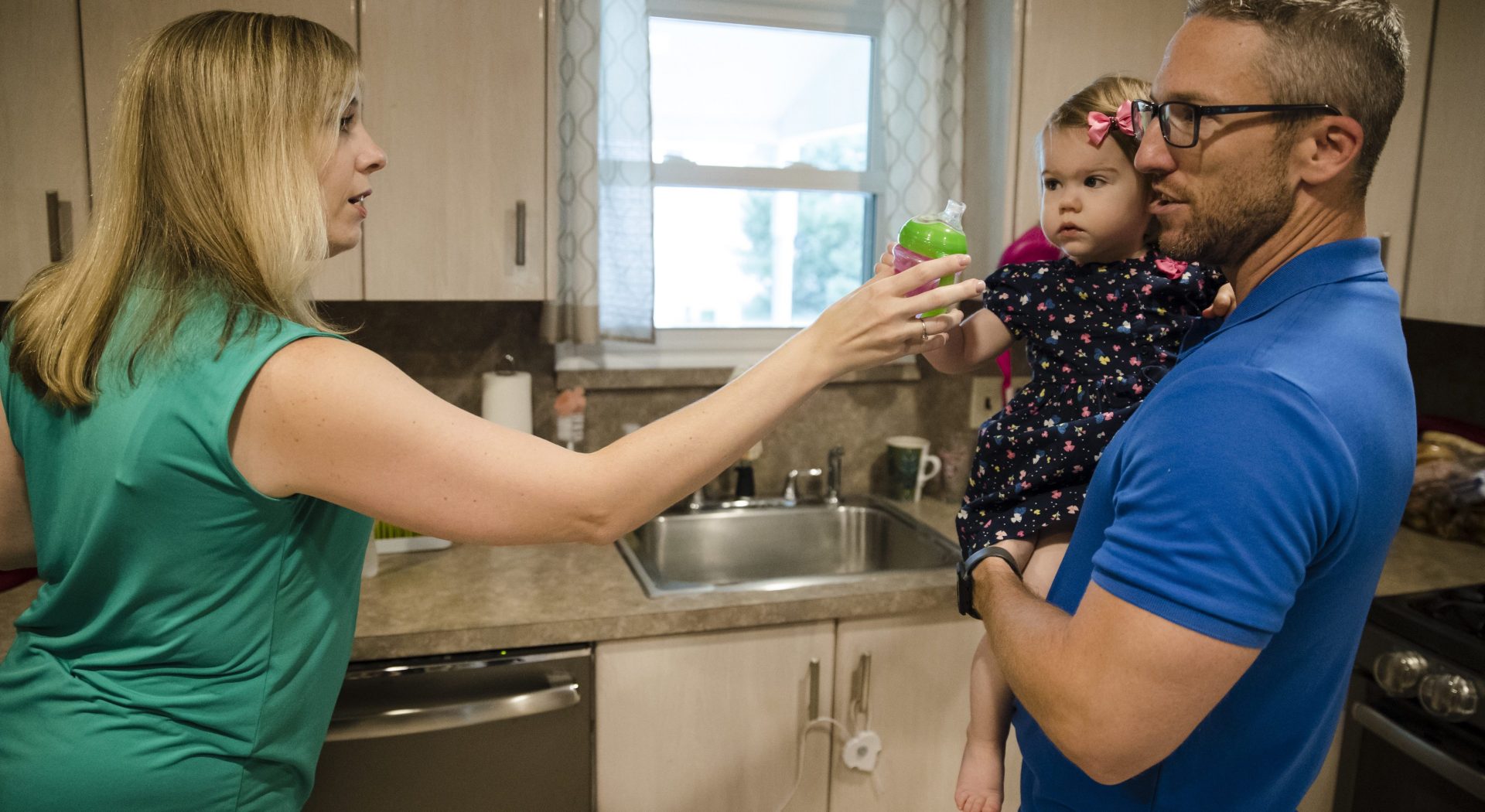 In this Aug. 1, 2018 photo, Lauren Woehr hands her 16-month-old daughter Caroline, held by her husband Dan McDowell, a cup filled with bottled water at their home in Horsham, Pa. In Horsham and surrounding towns in eastern Pennsylvania, the foams once used routinely in firefighting training at military bases contained per-and polyfluoroalkyl substances, or PFAS. (AP Photo/Matt Rourke)

Pennsylvania lawmakers on Tuesday slammed the reported decision of the federal government not to regulate two chemicals that have been linked to cancer and other illnesses when present in drinking water.

Politico reported Monday that the U.S. Environmental Protection Agency has decided not to set enforceable health limits for PFOA and PFOS, two of the PFAS class of chemicals that are being increasingly strictly regulated by some states as more becomes known about their risks to public health.

The EPA would not confirm that it has rejected calls by many campaigners and state officials to set a national standard for the two chemicals. The agency said in an initial statement that it will describe how it is “identifying and understanding” its approach to PFAS when it releases an action plan that is currently under review by other federal agencies.

On Tuesday, the EPA issued a second statement saying that, contrary to some news reports, it has not finalized or publicly issued its PFAS management plan, a draft of which is being circulated to other agencies. It said it is committed to evaluating new drinking water standards under a process required by the Safe Drinking Water Act.

Although EPA has reportedly rejected the idea of regulating the chemicals under the SDWA, it has decided to list them as hazardous under the Superfund law, which would force polluters to pay for cleaning them up, Politico reported.

Lawmakers at federal and state levels said the Politico report appears to show that the EPA has dismissed calls for tough national regulation, and that states will now have to step up their own efforts to curb the chemicals.

In Pennsylvania, high levels of PFAS contamination have been found, among other places, in public and private water systems in the towns of Horsham, Warminster and Warrington in Bucks and Montgomery Counties near two military bases where the chemicals were used in firefighting foam for decades. The chemicals were also used in consumer products like nonstick cookware and fire-retardant fabrics; they are no longer made in the U.S. but persist in the environment, and are widespread in humans, scientists say.

Pennsylvania’s Democratic U.S. Senator, Bob Casey, said he was outraged that the Trump Administration appears to have abandoned the Safe Drinking Water Act, which he says should be used to set national health standards for the chemicals.

“They need to set a standard so we can ensure that people are safe from what is in essence poison in the water,” Casey told StateImpact. “So this is inexcusable. We cannot allow this to happen in Pennsylvania or any other state.”

Casey said he has already worked to push the Department of Defense to address the issue.

“We’ve had to push several federal agencies year after year after year to do something about this,” he said. “And we are just getting warmed up because if they want to be pushed harder and harder we’re going to continue to do that.”

Delaware Sen. Tom Carper said he’s disappointed but not surprised by the report. During confirmation hearings on Capitol Hill last week, Carper, who is the ranking Democrat on the Environment and Public Works Committee, had asked Acting EPA Administrator Andrew Wheeler if the EPA could commit to establishing a maximum contaminant level for PFAS within the next two years, and Wheeler answered no.

“We are anxious to see a sense of urgency, a sense of commitment to getting to work on this,” Carper told StateImpact. “It’s not a question of whether it’s harmful, the question is are they going to develop a clean drinking water standard.”

Carper says unless Wheeler acts on PFAS, along with a number of other issues including climate change, he will try to block his nomination as permanent EPA Administrator.

New Jersey has led the nation in moving to regulate PFAS, and the DEP says it will decide by this spring on regulations of PFOA and PFOS. A team of scientists that advises the DEP has recommended a limit of 14 parts per trillion (ppt) for PFOA and 13 ppt for PFOS. The state did set a limit for PFNA. Currently, the EPA has a recommended limit of 70 ppt for the two chemicals combined.

Pennsylvania state Sen. Maria Collett, a newly elected Democrat who plans to introduce two bills to curb the chemicals, said she too was disappointed but not surprised to read the report that the Trump administration has backed away from regulating the chemicals.

“The uncertainty and failure to act in Washington is exactly why our state legislators need to step up,” Collett said in a statement. “I will continue to support efforts at both the federal and state level to regulate these chemicals, and hope my fellow legislators will support me.”

U.S. Rep. Brian Fitzpatrick, a Bucks County Republican whose district includes the Horsham area, said the report’s suggestion that the EPA is shirking its responsibility to protect drinking water is “unacceptable.”

Fitzpatrick, the co-founder of a new bipartisan Congressional task force on curbing PFAS contamination, said: “If EPA refuses to do its job, Congress must intercede.”

Advocates for strict national standards on PFAS chemicals in drinking water have long called for the EPA to set enforceable national standards. But in the absence of federal regulation, some states such as New Jersey have begun to impose their own levels which are much lower than those recommended, but not required, by the EPA.

One campaigner said the EPA’s apparent decision puts even more pressure on states such as Pennsylvania to set their own rules.

“There is no credible expectation that EPA is going to do anything at all now, and the only way to ensure clean drinking water is for the states to step up,” said Tracy Carluccio, deputy director of Delaware Riverkeeper Network, a longtime advocate for low health limits on PFAS.

In Pennsylvania, Gov. Tom Wolf’s newly created Action Team on curbing PFAS has failed so far to propose regulation that would set specific limits for PFAS chemicals, Carluccio said. “They really have a responsibility they are not living up to at this point,” she said.

Local governments, too, can protect residents from contaminated water, she said. Horsham Township, for example, has installed granular activated carbon filters after finding high levels of PFAS contamination on its public wells, and has brought it down to very low levels.

But Environmental Working Group, a national advocate for more action to curb the chemicals, said there shouldn’t be a patchwork of regulations that varies from state to state or even town to town.

“The most efficient and equitable way to remove these chemicals from the nation’s drinking water supply is to use the agency’s authority to set legal limits,” said EWG’s senior scientist, David Andrews. “It’s a national problem, and it needs a national solution. Anything short of that is window dressing.”

On Monday, Vermont announced a new health limit of 20 parts per trillion (ppt) for five PFAS chemicals in drinking water. That limit is less than a third of the 70 ppt limit that the EPA for two of the chemicals, PFOA and PFOS combined.

After some awkward moments, kids dressed as the Lorax got to meet Gov. Wolf -- and make their point