Cheryl Hurt of Clairton at a press conference to discuss air pollution from US Steel's Clairton Coke Works.

Some Clairton residents and environmental activists are calling on the Allegheny County Health Department to force US Steel to put the Clairton Coke Works on hot idle while it repairs the plant’s pollution controls. They made their case at a news conference Wednesday arranged by local environmental groups.

The plant’s sulfur dioxide controls have been disabled since a Christmas Eve fire.

Many residents didn’t know about the fire, and its impact on local air quality, right away because the county issued an air quality warning two weeks later, after pollution levels near Clairton spiked several times. The alert urged vulnerable populations — like children with asthma or the elderly — to limit their outdoor exposure. Several students in local schools have reported problems with their asthma since the fire.

Summer Lee, state representative from nearby Braddock, said the county should force the plant to go on hot idle — where it stays running but doesn’t produce any coke — while US Steel retools its pollution control equipment.

“By letting them continue on, it’s saying that the business of the Clairton Coke Works is more important than your health — and we’re here to say that that is not the case anymore,” Lee said, in heated comments at a community center in Clairton. Lee’s district includes another US Steel facility, the Edgar Thomson steel mill.

Lee said that like many people, she didn’t find out about the Dec. 24 fire until the county issued its air alert.

“I was sitting on Facebook one day, and I read we shouldn’t go outside, and they said it so nonchalantly as if to imply that this is par for the course for your community — that you should be used to living that way. This is not natural and it’s not fair.”

Health Department director Karen Hacker said the county wasn’t made aware of the extent of the damage to the plant’s pollution control system for several days, in part because US Steel had problems accessing the site. “They couldn’t even get inside the building,” Hacker said. “Not everything (was) known immediately.”

She said the county didn’t want to alarm the public unnecessarily. “We know this from epidemics — if you’re putting out a statement that causes people intense anxiety when that’s not necessary, that’s not helping the public.”

She said by Jan. 4, the department realized that the losses at the plant were a threat to local air quality. By then, US Steel had begun making changes to its production to minimize the release of sulfur dioxide, a lung irritant that can affect people with lung or heart conditions.

Pollution levels remained low until Jan. 8, when twice that day they surpassed federal health standards. The county issued its alert the next day.

Monica Curges of McKeesport said her 7-year-old grandson Aaron Washington Jr., who lives in Clairton, experienced breathing problems on Christmas day, even though he normally doesn’t have respiratory issues.

“He couldn’t even enjoy (Christmas) because he had breathing problems, coughing and hacking, and they couldn’t find out what was going on with his respiratory condition,” she said. 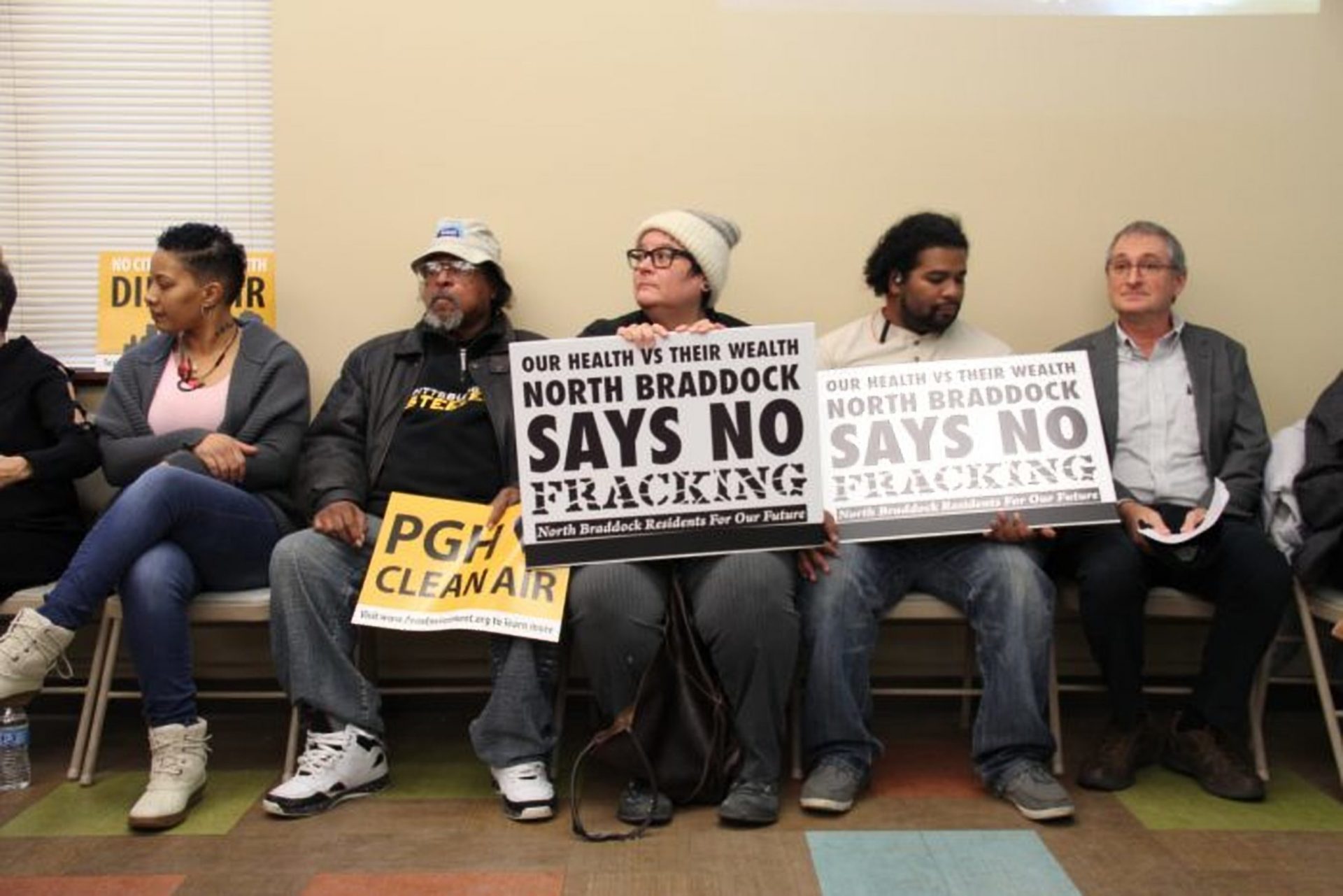 Residents attended a meeting Wednesday night about the effects of increased air pollution resulting from a fire at Clairton Coke Works outside Pittsburgh.

Zachary Barber of PennEnvironment said even though air pollution levels have gone back down since the Jan. 9 air alert, the plant should still go on hot idle. He said the plant is required by the terms of its air pollution permit to use the pollution controls and that it was “illegal for them to be operating without it.”

“It’s clear that as long as this plant continues to operate without pollution control,” he said, “there is at the very least elevated risk of dangerous pollution that is going to make people sick.”

Hacker said the county would monitor air pollution levels in the area, and wouldn’t rule out a further order.

“If we see additional exceedences, we wouldn’t take hot idle off the table,” Hacker said.

Chelsa Wagner, Allegheny County controller, used her remarks to call out county executive Rich Fitzgerald for not publicly calling for greater scrutiny of the Clairton plant, the largest coke plant in North America. The facility is one of the biggest sources of air pollution in the region, and air quality nearby is some of the worst in the country.

“On this issue of children and residents being poisoned by our air — it’s radio silence. We’ve heard nothing from our county executive,” Wagner said.

In a statement, Amie Downs, county spokeswoman, said the county executive had “been talking about the need to hold Clairton and US Steel accountable for years” and praised Hacker’s work as the health department director.

The statement pointed to the department’s enforcement order issued in June, in which the county threatened US Steel with a partial idling of the plant if it didn’t clean up its emissions. US Steel is appealing that order.

“Dr. Hacker is the strongest advocate for air quality and health that this county has ever had,” the statement said. “She has invested in the department and ensured that they are pushing the envelope on enforcement and other actions related to air quality.”

Ahead of public event in Pittsburgh, StateImpact reporters discuss what 'zero carbon' might mean