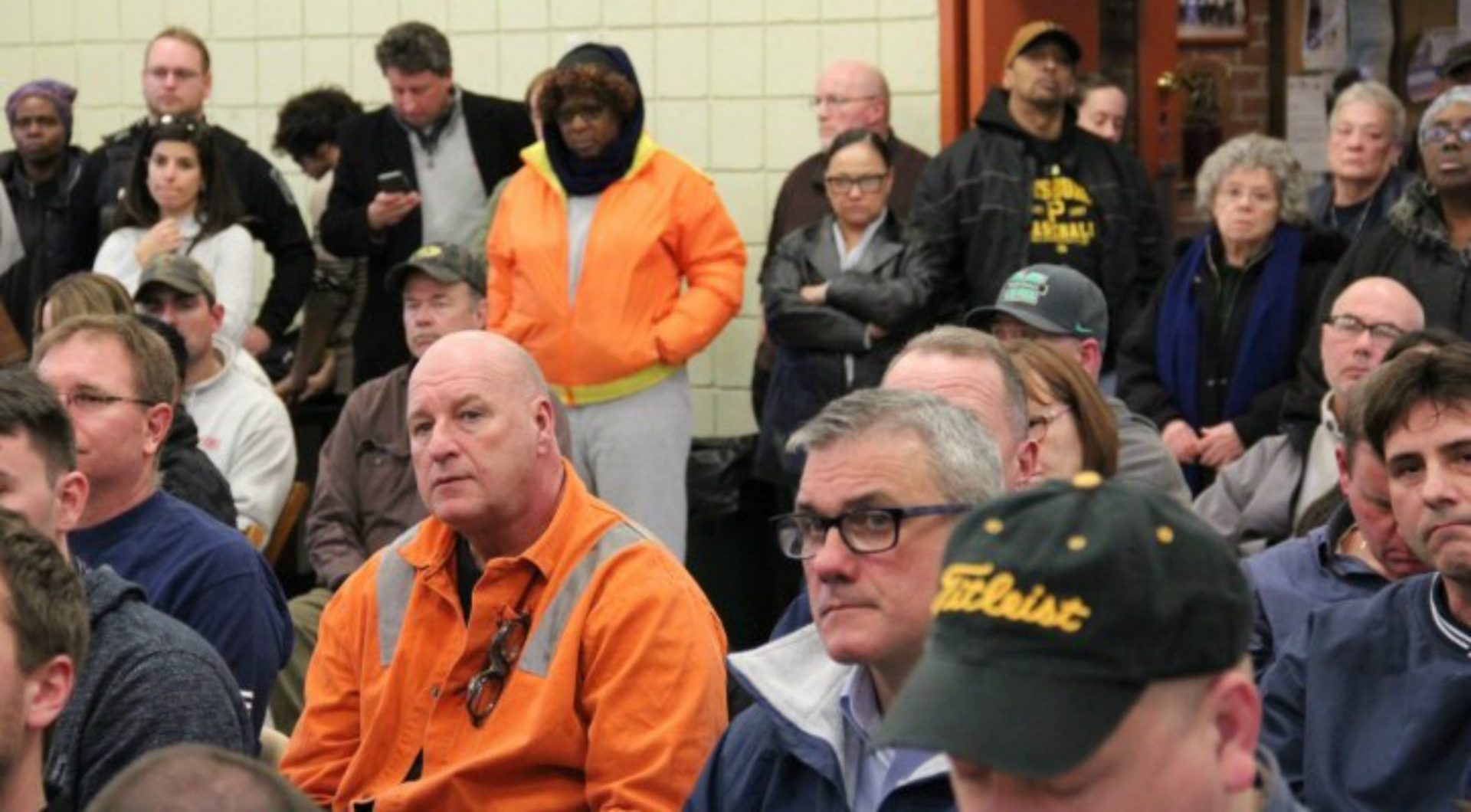 Residents at a Jan. 22 meeting about the Clairton Coke Works.

Dozens of Clairton residents came to hear officials from US Steel and Allegheny County discuss air pollution issues stemming from a Christmas Eve fire at the Clairton Coke Works. The fire damaged pollution controls, leading to spikes in pollution levels in the area.

Many residents said they heard about the fire about two weeks after it happened, on Jan. 9, when the Allegheny County Health Department issued an air quality warning – after levels of sulfur dioxide in the area exceeded federal health standards several times.

One of those surprised by the news was the mayor of Clairton, Rich Lattanzi. He only heard about the fire when the county issued its warning. He said as the mayor of the town, he should have been kept informed.

“The health department could have notified us, but I also want US Steel to also include us in that email or that chain to say, ‘Hey, you’re the city of Clairton, you’re the host community, this is what’s going on,’” he said.

Art Thomas said he only heard about the fire on Jan. 9, watching the local news. His wife, Kathryn has sarcoidosis, a lung disease. For her to have to wait that long to find out, he said, “isn’t right.”

The Clairton facility is the largest coke plant in North America. Coke is a key component of steelmaking, made by baking coal at high temperatures.

The Dec. 24 fire damaged equipment that reduces emissions of sulfur dioxide, a lung irritant that can affect the breathing of people with asthma and other respiratory conditions.

At the meeting, representatives from US Steel showed photos of where the fire started – at a compressor inside the plant’s gas processing center.

Michael Rhoads, the plant manager at the Clairton Coke Works, said that the fire came after a pipe on the compressor ruptured. The rupture was so significant it “sheared the bolts that held the gas piping [of the equipment] together,” he told the crowd. “That gas piping being separated [became] the fuel source that resulted in the significant fire and the significant damage that we saw in the facility.”

The company says most of its repairs could be done by May. In the meantime, it has changed its operations to lower its emissions. Though pollution levels have returned to normal, the air quality warning remains in effect.

The company also announced it will pay for the county to set up new air monitoring equipment nearby. The monitors will go on Clairton’s K-12 school and near US Steel’s Irvin Plant in West Mifflin. The company has also set up a web site, www.clairton.uss.com, which will provide updates on progress of the plant’s repairs.