The Bruce Mansfield Power Plant burns coal to generate electricity in Beaver County. The plant shut down in 2019 because of “a lack of economic viability in current market conditions.”

Gov. Wolf on climate change: ‘We are having real problems’ 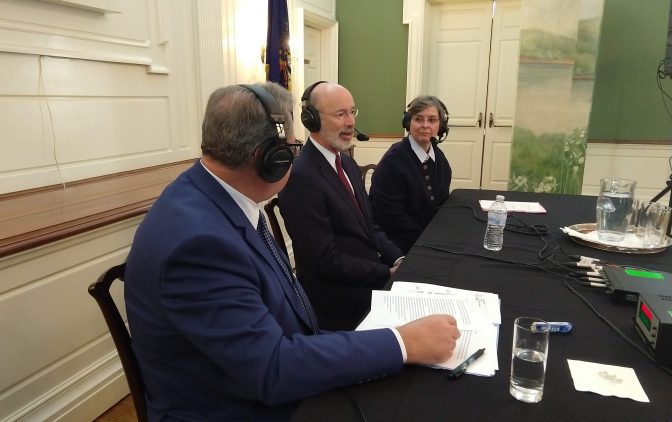 From left, WITF Smart Talk host Scott LaMar speaks with Gov. Tom Wolf and first lady Frances Wolf during a live broadcast from the Governors Residence in Harrisburg on Dec. 7, 2018.

In a wide-ranging interview about his priorities for his second term, Gov. Tom Wolf said climate change is “one of the big issues we have to deal with” and that “we are having real problems” right now.

He said his administration is reviewing a petition to create a cap-and-trade program in Pennsylvania and that he wants the state to get 10 percent of its power from solar energy by 2030.

Wolf spoke Friday morning at the Governor’s Residence with Scott LaMar, host of WITF’s Smart Talk. Here’s the portion of the interview where they discussed climate change.

Note: this interview has been lightly edited for length and clarity.

LaMar: There was a petition filed last month to the state’s Environmental Quality Board to try to create a cap-and-trade program to limit greenhouse gas emissions in Pennsylvania. This petition could be one way that your administration could enact significant climate regulation on your own in the executive branch, largely bypassing the Legislature. Are you open to this?

Wolf: Yeah, we’re looking at that right now. The Department of Environmental Protection is looking at that petition. I haven’t come to a conclusion on that. But we have a problem with climate change. That is a fact. We’ve all seen that this past year. York County has had more rain. I’ve gone around the state: Bradford County, York County, Schuylkill County, Allegheny County, Philadelphia County — all over the state — localized flooding.

I’ve never seen this in my lifetime. We are having real problems. It’s not a good thing. We just had our first grandchild. He’s three months old now. It’s our responsibility to make sure that the world [he’s inheriting] is a good one, and we have a lot of work to do. Climate change is one of the big issues we have to deal with.

LaMar: So would you generally support cap-and-trade?

Wolf: Yeah. I mean, I need to learn more about it. One of the issues is how that works at the state level. Pennsylvania exports energy to other states, so it’s easier if you’re an importer of energy and someone else is doing the heavy lifting. I need to figure out what Pennsylvania can do.

The world is moving toward renewable, sustainable energy like solar and wind. The capital markets are already making it hard for anybody who wants to invest in fixed-site power generation plants. So the question is: What do we do to get to that solar and wind future? Those are carbon-free. How do we get to that as fast as we can? How do we move more quickly toward solar? I’ve closed the borders on our purchasing of solar power. I’ve talked to a number of environmental groups about what else should we be doing, and this might be one of the things to look at.

LaMar: Will you set any [climate] goals in the second term of your administration?

Wolf: Yeah, and I already did some of that, in terms of where I want solar to go to. I think we’re at half of one percent now. We want to get to 10 percent by 2030.  Maybe that ought to be higher and maybe we ought to be moving faster. I’m very open to these kinds of things.

The capital markets say it’s a lot more efficient to invest in a solar farm than it is to invest in a fixed-site power plant. One of the reasons is the only real cash expense, after you’ve created the capital to build the plant, is depreciation — which is a non-cash expense.

I used to say the only other expense is mowing the lawn. I went to a solar farm in Elizabethtown and said that, jokingly, and somebody came up to me afterwards and said, “That’s not true.” They said, “We have farmer next door who has a bunch of goats and they come over and eat the grass underneath. We don’t even pay for the lawn mowing.”