State representative Glenn Holmes (3rd from right) has introduced two bills in the Ohio House of Representatives meant to rein in injection wells.

Fracking wastewater from Pa. often ends up in Ohio. Some residents say they’ve had enough 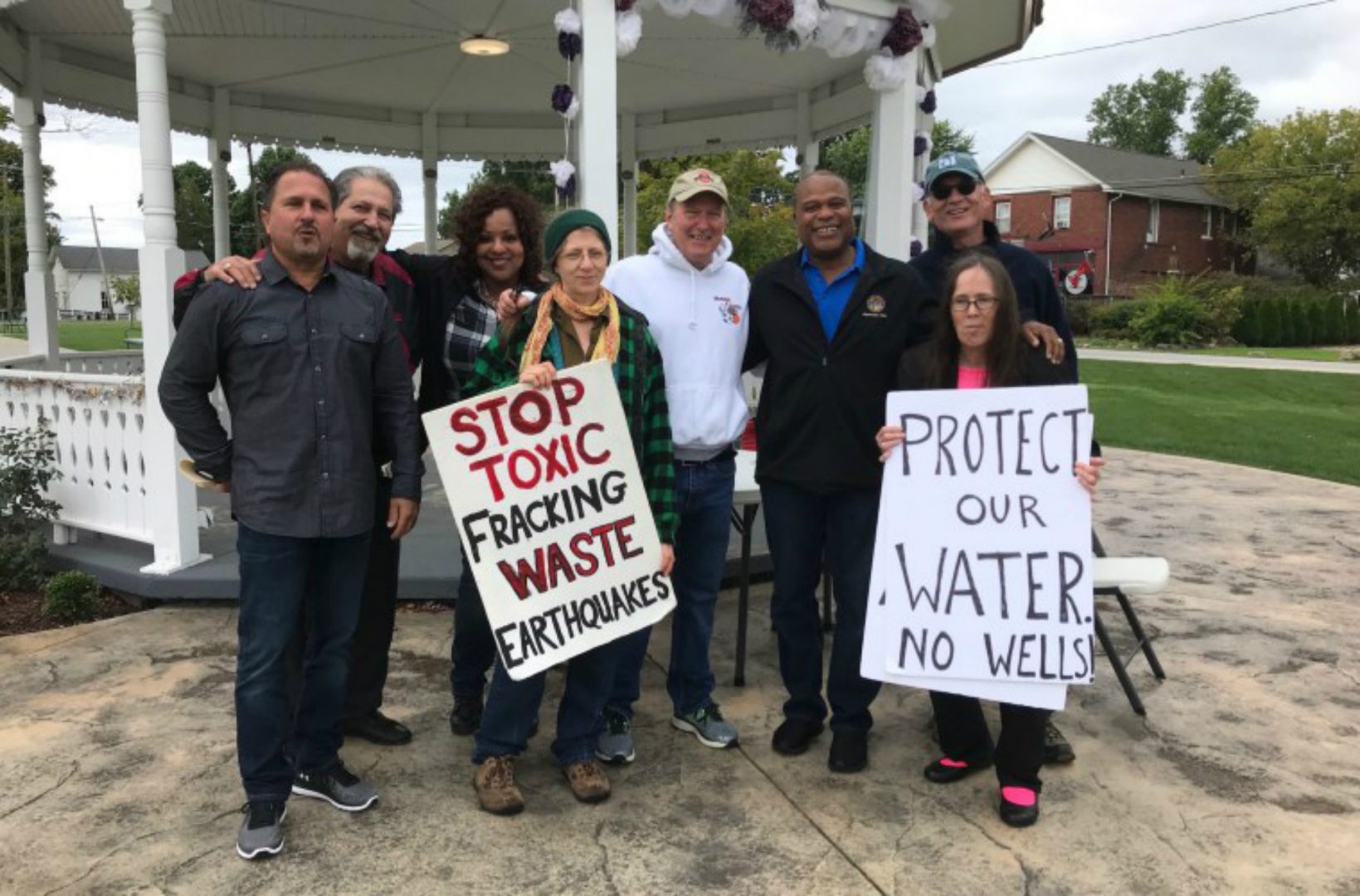 State representative Glenn Holmes (3rd from right) has introduced two bills in the Ohio House of Representatives meant to rein in injection wells. 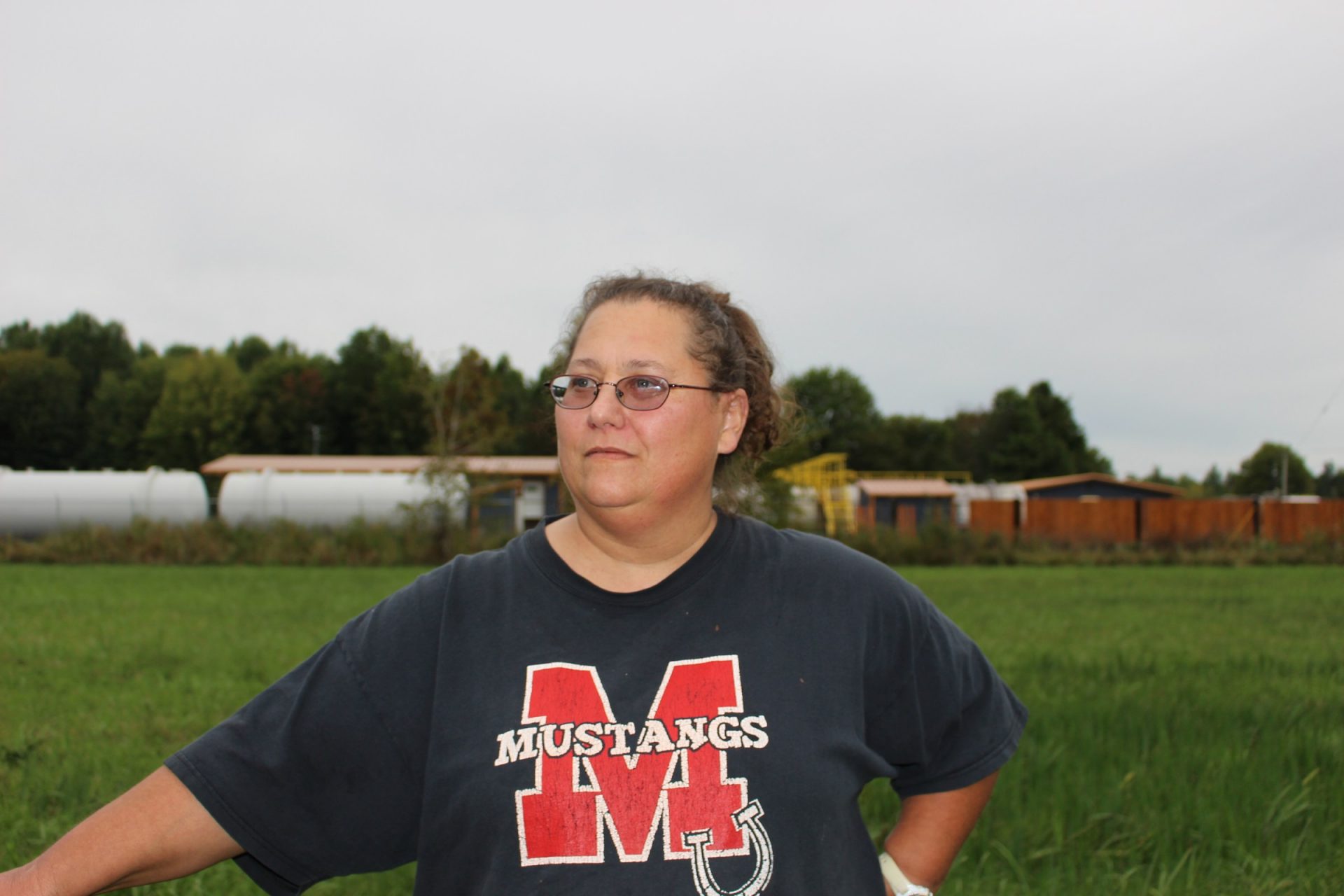 You can see and hear the injection well from Michelle Garman’s property, less than 10 miles from the Pennsylvania border.

Michelle Garman used to marvel at the 22-acres of land around her home in Vienna, Ohio, less than 10 miles from the Pennsylvania border.

“I would lean out my back window and say, ‘oh my god, I never dreamed of owning this much land’,” she said.

She didn’t know much about fracking then, let alone frack waste injection wells.

But she remembers News Years Eve 2011, when a 4.0-magnitude earthquake shook nearby Youngstown, Ohio. Around a dozen smaller quakes followed. The state determined that the quakes were caused by an injection well. And one in New Castle, Pennsylvania was linked to fracking as well. The well believed to have caused the Youngstown quakes has been closed permanently.

But Garman’s view changed in 2013 when an injection well was built on the property next door.

“Where your looking at tanks and cement and fencing, it was trees and deer and turkey. And blue jays…and I never see them anymore,” she said.

Garman describes big trucks carrying chemical-laced wastewater that squeal into the site at all hours. She can hear the pump from her yard. And Garman fears for her family.

“How does it affect our health, my son’s health?” she wondered. “I mean, it is toxic. Plain and simple, that’s poison that they’re pumping into the ground.”

Garman says her concerns didn’t get much response from the Ohio Department of Natural Resources (ODNR), the agency with authority over injection wells. In Ohio, there’s no local control of the oil and gas industry.

And few leaders in her town would criticize the local company, Kleese Development Associates, that built the well next to her property.

Then, in April of 2015, a waste oil spill caused a slew of dead animals and a polluted nearby wetlands. It was caused by another injection well owned by Kleese.

“People were scared,” she said. “[The were asking], ‘can I drink the water, can I bathe my children in it, can I cook with it?”

The state forced Kleese to shut down the injection well, and it’s still closed. The company could not be reached for comment.

“They don’t want it”

On a recent evening, leaders from townships in Trumbull County gathered at the gazebo in the Brookfield town square. Brookfield Township trustee Gary Lees coached people on how to send letters to their representatives in Columbus asking them to consider legislation that would stop more injection wells in Trumbull County.

Trumbull County already has 17, among the most in the state, and 6 more are in the works. In Hubbard Township, Bobcat LLC has applied to the Ohio Department of Natural Resources for an injection well.

Pittsburgh-based Seneca Resources has drilled a new injection well in Brookfield Township, one of five it plans on the site. The company still needs state approval of its surface facility.

State representative Glenn Holmes says people there are fed up. He references a petition against a plan for the five injection wells by Seneca Resources.

Holmes has proposed two bills in the Ohio House of Representatives meant to rein in injection wells. One, introduced last spring, would divert more than a third of fees Ohio collects from other state’s frack waste disposal to local governments. Last year, fees for this waste brought in more than $650,000. Holmes says counties should get a cut.

“You have the truck traffic, you have the noise, and you also have the stress and the tension,” he said. “‘Is this going to cause an earthquake?’ Is my aquifer or my well going to be polluted because of this?’”

More recently, Holmes introduced another bill to stop ODNR from permitting any more injection wells in Trumbull County, capping the number of injection wells at 23 per county.

Ted Auch doesn’t think that’s a good idea. He works for the non-profit FracTracker Alliance. Auch worries that a cap per county would actually open up more of the state to injection wells, which have more than doubled in the last five years.

Auch said money from fees should be spent on inspectors.

Auch warns that Ohio has become a dumping ground for other state’s fracking wastewater.

The ODNR says it has strong regulations for injection wells, but declined an interview for this story, as did the Ohio Oil and Gas Association.