A specimen of Arethusa bulbosa, an orchid commonly known as dragon's mouth, was collected in flower on May 29, 1909.

Centuries-old plant collections could answer questions about impact of urbanization

Hundreds of thousands of preserved plants will be made available online 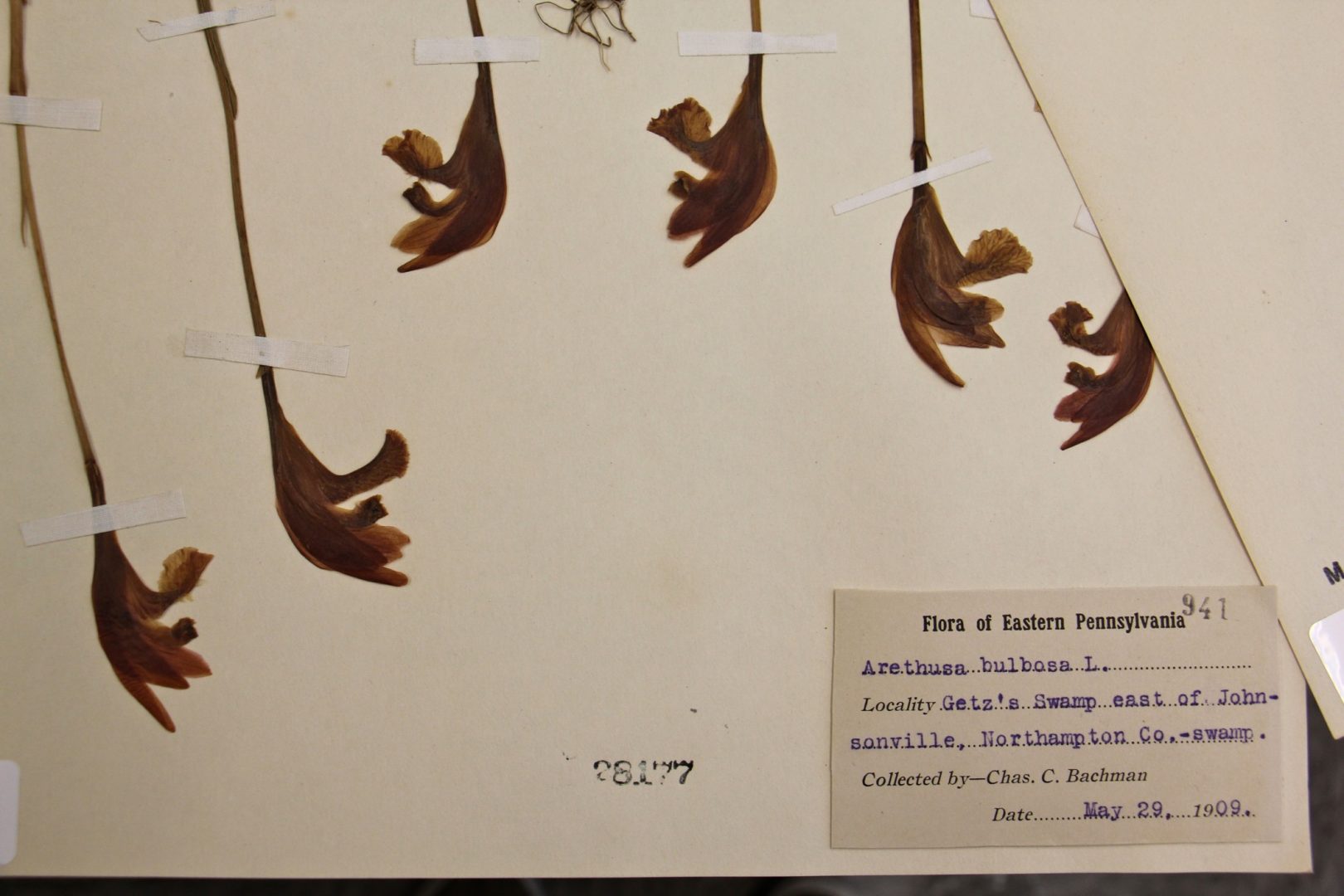 A specimen of Arethusa bulbosa, an orchid commonly known as dragon's mouth, was collected in flower on May 29, 1909. 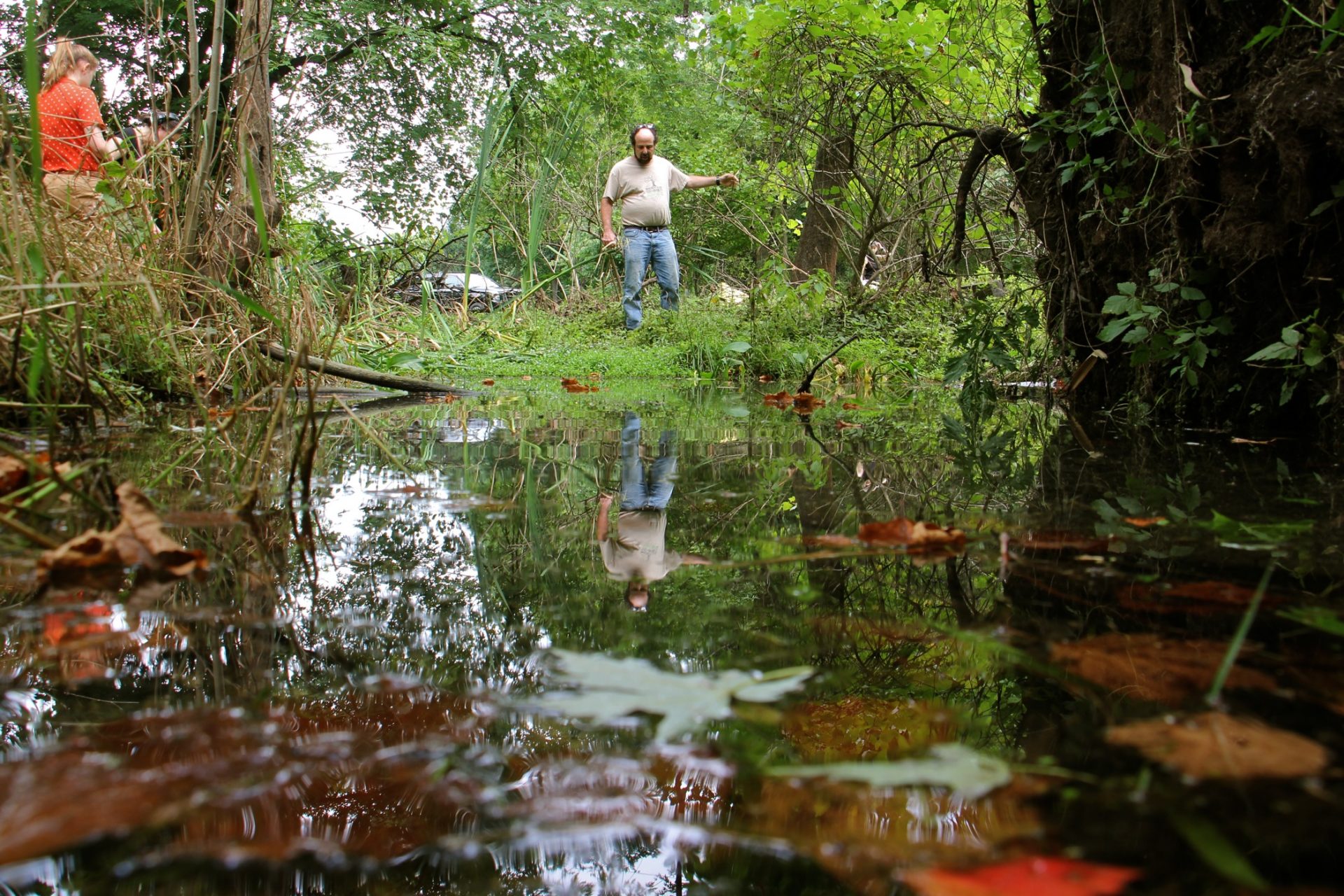 Dr. Richard Niesenbaum and his assistant, Muhlenberg student Lindsay Press, search for rare plants at a roadside pond near Cedar Creek in Allentown.

For centuries, explorers, scientists, and amateur botanists scoured the country to document and preserve plant species. Once prized like fine art, the collections were often bequeathed to institutions that housed herbaria, or libraries for plants.

Over time, the collections became obscure and fell out of use, aside from the occasional researcher who had to schedule appointments and often travel long distances to view the records.

Now, there’s a new effort to make hundreds of thousands of these dried and preserved plants collected along the East Coast available at the click of a button, creating a digital database poised to answer questions about conservation, climate change and development.

“How has the environment changed,” said Rick McCourt, botany curator at the Academy of Natural Sciences of Drexel University in Philadelphia. “What plants occur where. Do they occur someplace differently now than they used to. Are they vanished or gone from an area?” 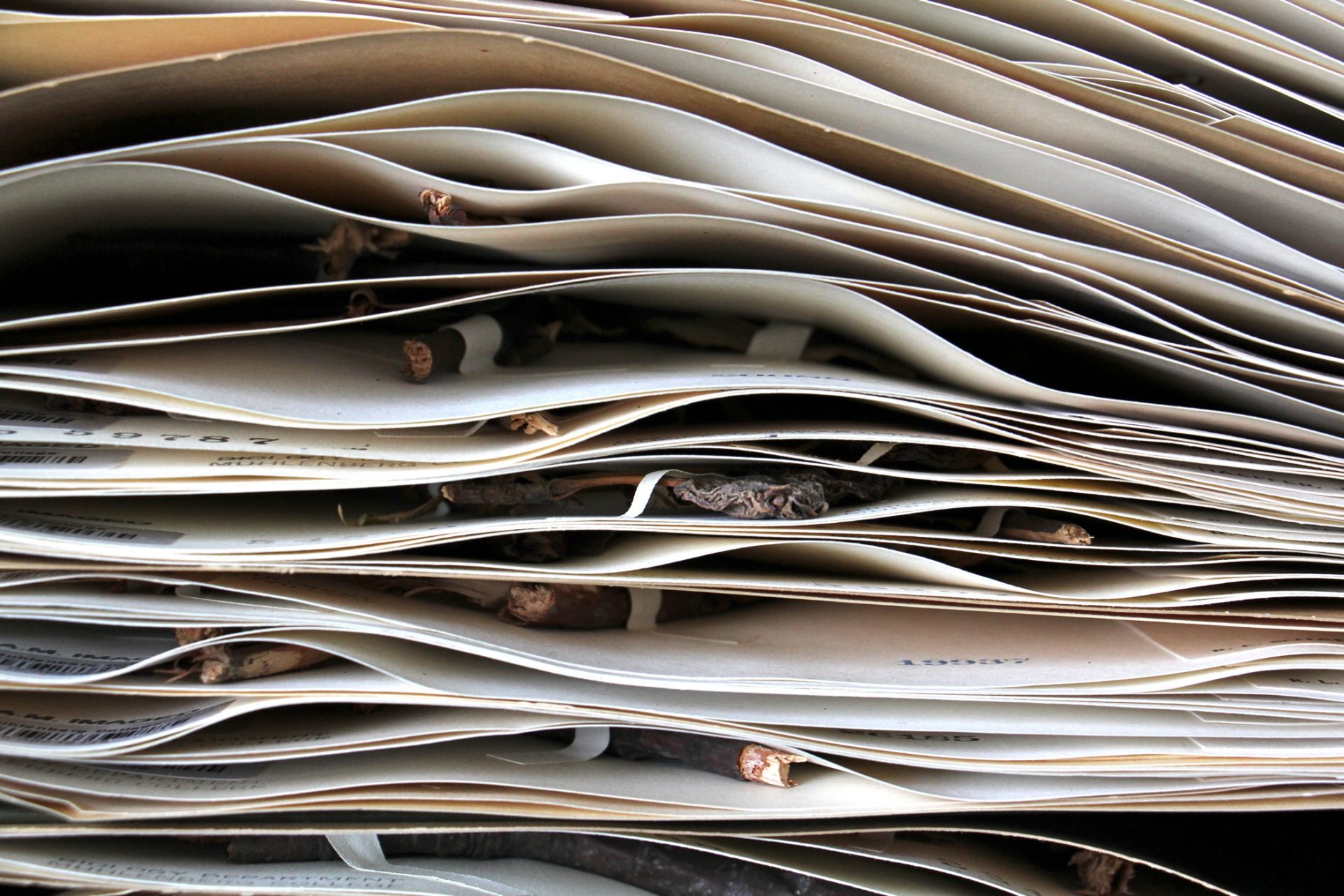 The herbarium at Muhlenberg College contains more than 50,000 specimens, some collected more than 100 years ago.

McCourt helps manage the oldest herbarium in North America, which has an estimated 1.5 million plant specimens in its collection. About 350,000 were collected along the East Coast.

He says the data might even raise the possibility of using plant DNA to bring back extinct species.

“It’s more like a Jurassic Park dream,” McCourt says. “But DNA is DNA, who knows? Before 1952 we wouldn’t have known what DNA was, much less that you could get it out of museum specimens.” 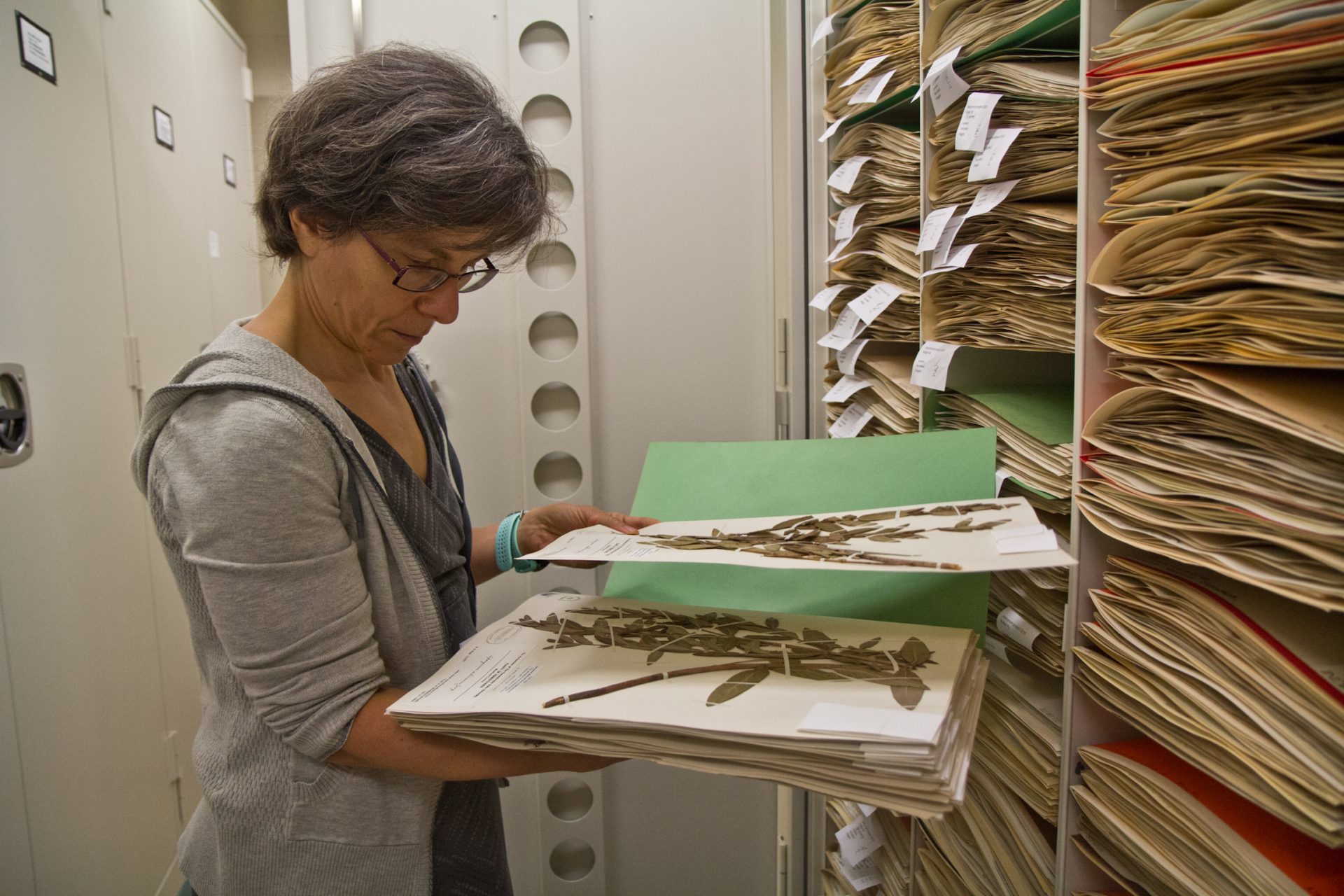 Tatyana Livshultz, PhD., assistant curator of Botany at the Academy of Natural Sciences in Philadelphia looks through samples of plants from the Mid Atlantic region.

At the Academy, the plant species are housed in large metal cabinets, which are compressed together in a windowless, third-floor room that smells pungently of herbs. The plants were dried, then sewn, glued or taped to paper, and placed in manila folders that are stacked inside the cabinets. As he pulls out specimens, McCourt points to the collector’s careful handwritten notes detailing when and where a species was collected. Some date back 400 years.

“I almost think of it like any collector, like baseball trading cards,” McCourt said. “It was a competitive game to see if you could describe a lot of new species, find a lot of new species, make them valuable to the people you were working for or your own reputation scientifically. And there were different levels of vanity associated with it.”

Whether those collectors searched for valuable medicinal or agricultural plants, or whether it was simply a labor of love, few would have known they were creating such a rich database for future scientists. Funded by the National Science Foundation, the Mid-Atlantic Megalopolis Project will put about 800,000 records from about a dozen herbaria online via high-resolution photos of plant specimens that span the urbanized corridor from New York City to Washington, D.C.

At Muhlenberg College in Allentown, plant ecologist Rich Niesenbaum has begun using the data from its herbarium to help find out what made some of the plants in its collection go extinct. Muhlenberg already digitized about 50,000 specimens. The database allowed student Lindsay Press to pull the records of those that have been registered by the Pennsylvania Department of Environmental Protection as extinct, rare or endangered. But going by the handwritten notes is difficult.

Drexel University students work to digitize the Mid Atlantic collection in the herbarium at the Academy of Natural Sciences in Philadelphia.

“They would say by a railroad track, and that railroad didn’t exist anymore,” Press said.

Her professor, Niesenbaum, has begun to hunt for the plants to help document the impact of urbanization, but also to possibly protect vulnerable species and the region’s biodiversity.

On a blistering hot day in August, Niesenbaum and Press headed out to hunt for one of the rare specimens in the collection.

Potamogeten zosteriformis, otherwise known as flat-stemmed pondweed, includes notes from the amateur botanist that it was found on July 20, 1924 in “Cedar creek south of Fairview Street.” The notes also mention a quarry. Niesenbaum said there’s only one old quarry in Allentown, so he’s pretty sure he knows where to go.

The banks of Cedar Creek in this part of Allentown are lined with thickets of reeds and cattails, and it’s across from a city park, so Niesenbaum hopes the plant will be found. But so far, he’s been unlucky with these searches. Invasive species like Japanese knotweed and stilt grass, which crowd out everything else except poison ivy, are one reason why some of these species may have gone extinct.

Niesenbaum pointed out railroad ties lying in the brush, and, spotting grass, he jumped into the creek. He pulled out a handful of aquatic grass, and said he’ll take it back to the lab to grow it and see if it’s a match.

“I mean, that’s exciting, because you know as as a plant hunter we spend a lot more time hunting and looking than actually finding,” he said. “And so if this is indeed the rare plant and it’s here right now in the urban environment in an urban setting, that offers a lot of hope.”

Several weeks later, he was still unsure if the grass found in the creek is what he was looking for, but he’s hoping to get a team of students together to search for more. 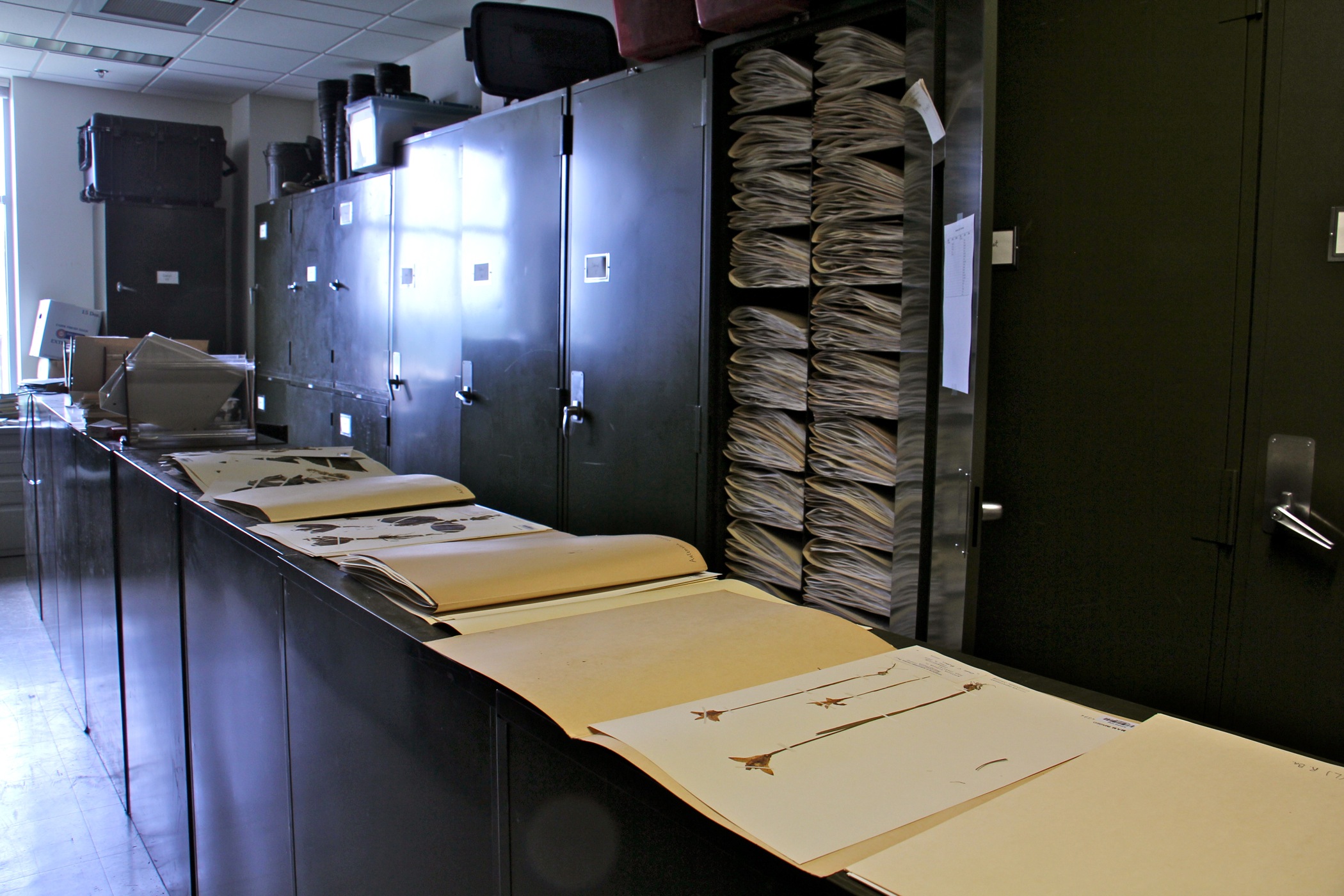 The herbarium at Muhlenberg College contains thousands of specimens, some collected more than 100 years ago.