A Mariner East 2 pipeline construction site is shown off Valley Road near Media, Pa., on Aug. 22. The site is close to where Sunoco is digging up a section of the pipeline after discovering a coating issue that needed to be fixed.

Delaware County township confirms excavation of new line. It's scheduled to be operational in about a month. 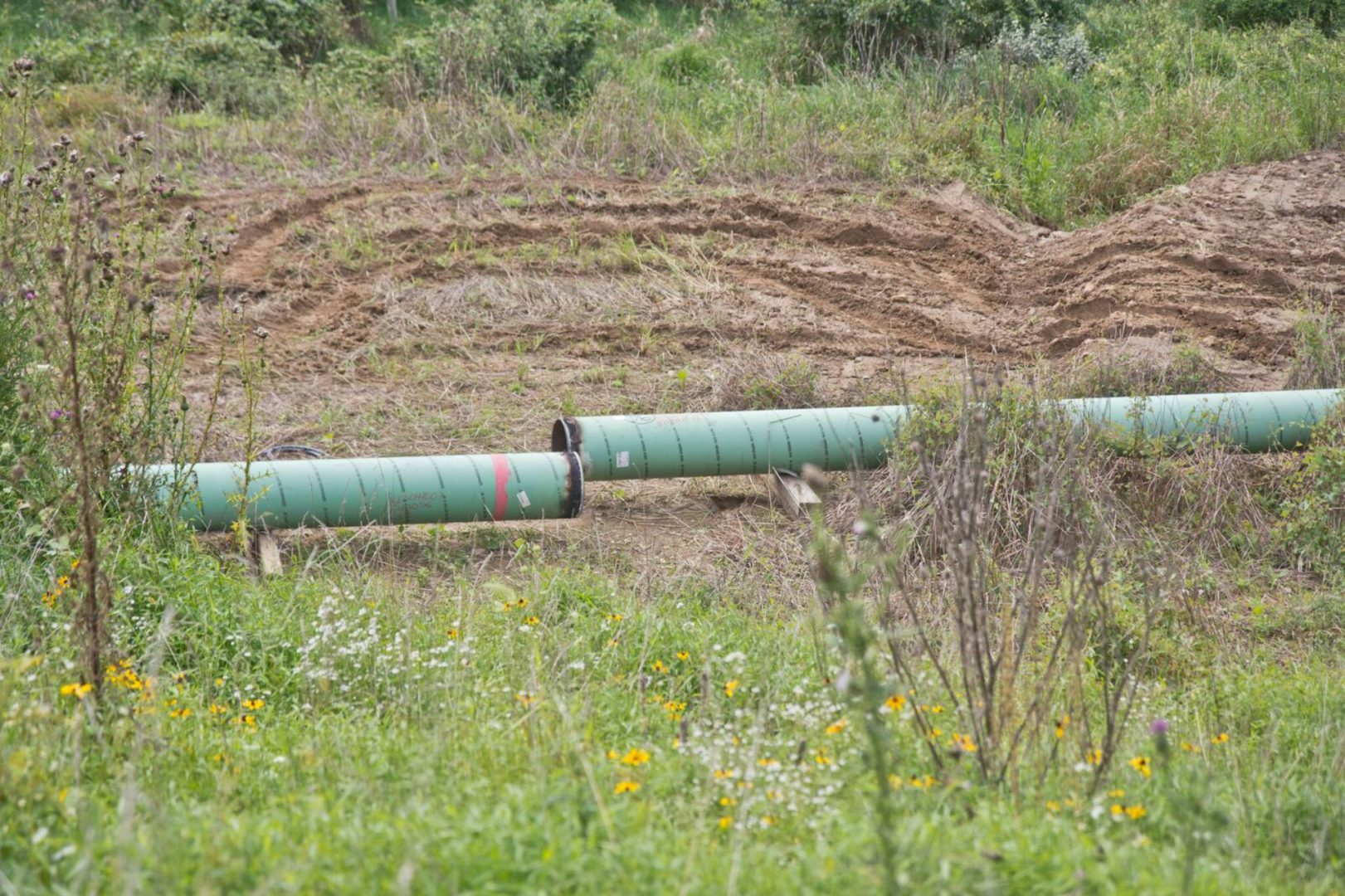 A Mariner East 2 pipeline construction site is shown off Valley Road near Media, Pa., on Aug. 22. The site is close to where Sunoco is digging up a section of the pipeline after discovering a coating issue that needed to be fixed.

Sunoco is lifting some of its newly laid Mariner East 2 pipeline to replace pipe that has been discovered with unspecified flaws in its coating, according to two documents obtained by StateImpact Pennsylvania from Edgmont Township in Delaware County.

The documents from an engineering contractor for the township refer to a “coating flaw” and a “coating issue” as the reasons for the work, which has been going on along Valley Road in Edgmont and Middletown townships for about a week.

“The section of pipe with a coating flaw has been removed,” said one of the documents, dated Aug. 16, from the contractor, Yerkes Associates Inc. “A new piece of pipe is being installed. Welding is in progress.”

Another document, dated Aug. 14, said that crews were on site “excavating pipe recently installed” after “A coating issue arose on a different piece of pipe to be installed.”

The second document said that manufacturing and shipping dates were being used to trace other pipes in the same shipment.

Coatings, often made with epoxy that bonds to the wall of a steel pipe, are designed to shield the pipes from external corrosion. It’s “rare” for a pipeline operator to replace pipe with flawed coatings after it’s buried, said Rick Kuprewicz, an independent pipeline consultant.

“Something triggered that the coating wasn’t quite right here, and it rose high enough for them to go dig it up and fix it, which is kind of rare,” he said.

The documents indicate that Sunoco is replacing sections of the multi-billion dollar natural gas liquids pipeline a little more than a month before it plans to begin operating the line.

Sandy Coleman, Edgemont Township treasurer, confirmed that the documents are an accurate record of the engineer’s report. She said the township hired Yerkes to inspect Sunoco’s work and report back to local officials.

Kim Hoopes, a land development inspector for Yerkes who inspected the pipe-replacement operation and wrote the reports, said one section of about 20 feet was replaced after a coating problem was found in another section elsewhere along the 350-mile cross-state route.

He said the problem appeared to originate from manufacturing, so might be detected in any other sections of pipe that came in the same shipment.

“Preventative maintenance is how I would put it,” he said. “This was an investigative excavation in association with one section of pipe that they did find with a coating issue, and they are now researching each piece of pipe that came in on that shipment. They are making sure that everything that’s going in is 100 percent.”

Hoopes said the flaws were first discovered outside Edgmont by the contractor that is installing the pipe. He said he is now satisfied that there is no further issue with the affected pipe section in Edgmont, and was unaware of any other section of pipe in the township that was affected by the coating issue.

Sunoco spokeswoman Vicki Granado said on Wednesday that one section of the line at Edgmont is being replaced as a preventative measure because the coating doesn’t meet the company’s standards. She did not immediately say whether other sections of the line are also being replaced.

“All work is constantly checked and rechecked, and if something needs to be redone or recoated during construction that is what we do, just like any construction project,” she said. “It does not impact the overall project. Our primary goal has been and continues to be to build a pipeline that is constructed to the highest standards.”

State Sen. Andy Dinniman (D-Chester County), a critic of the project, criticized the lack of information from state agencies. He said the Edgmont operation, originally unveiled by a resident’s right-to-know request, is the latest example of individuals discovering and reporting Sunoco’s many violations during the project, rather than state agencies taking strong enforcement action.

The discovery of coating flaws stoked long-held fears by Sunoco’s critics that the pipeline represents a grave threat to public safety because of the highly explosive nature of the natural gas liquids that will flow through densely populated areas like Philadelphia’s western suburbs. 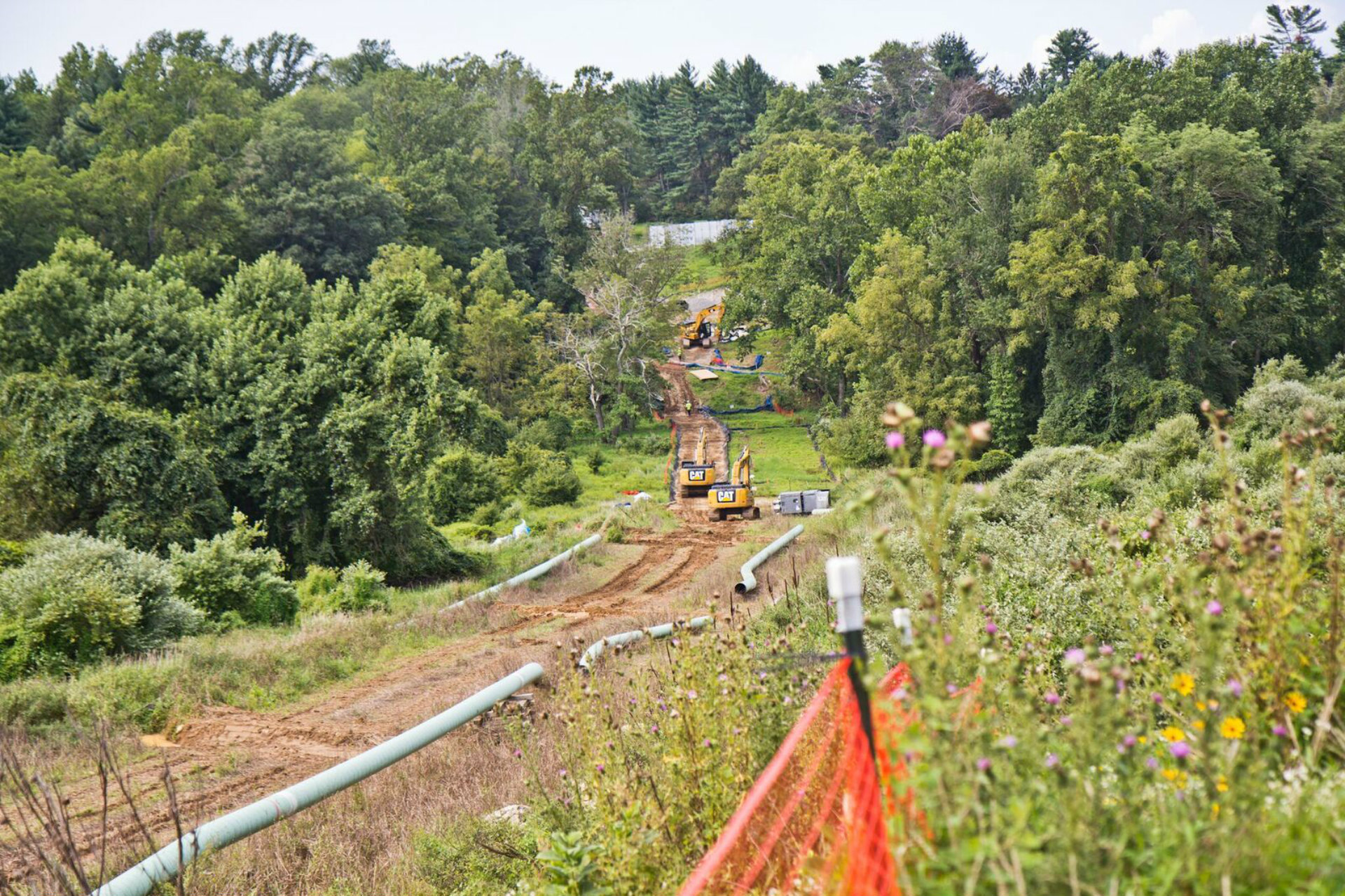 A Mariner East 2 pipeline construction site is shown off Valley Road near Media, Pa., on Aug. 21. The site is close to where Sunoco is digging up a section of the pipeline after discovering a coating issue that needed to be fixed.

“It’s concerning that there could be issues with so many pipes,” said Eve Miari, advocacy coordinator for Clean Air Council, a Philadelphia-based environmental group that has led several legal challenges to the project. “Are there problems lurking beneath the surface that we will only become aware of if the pipe becomes operational?”

Miari said the discovery of flaws in the pipeline shortly before the scheduled start of operation at the end of September recalls an incident in May in which a water contractor struck a section of Mariner East 2 at Middletown after being given inaccurate information by Sunoco on the depth at which it was buried.

The Public Utility Commission, which is responsible for pipeline safety in Pennsylvania, is aware of the new Sunoco work.

Early Wednesday, PUC spokesman Nils Hagen-Frederiksen did not respond to questions on the nature, number or location of flaws in the pipeline, or how they had been discovered, but said he would discuss the issue with the PUC’s pipeline safety division.

The federal Pipeline and Hazardous Materials Safety Administration did not respond to a request for comment on the documents.

When complete, the pipeline will carry propane, ethane and butane from the Marcellus Shale of southwest Pennsylvania to a terminal at Marcus Hook in Delaware County, where most of the fuel will be exported.