Swimming in the Wissahickon isn’t so idyllic: There’s poop in it. | StateImpact Pennsylvania Skip Navigation

A swimmer jumps into the Devil’s Pool in Fairmount Park in Philadelphia. (Kimberly Paynter/WHYY)

Swimming in the Wissahickon isn’t so idyllic: There’s poop in it. 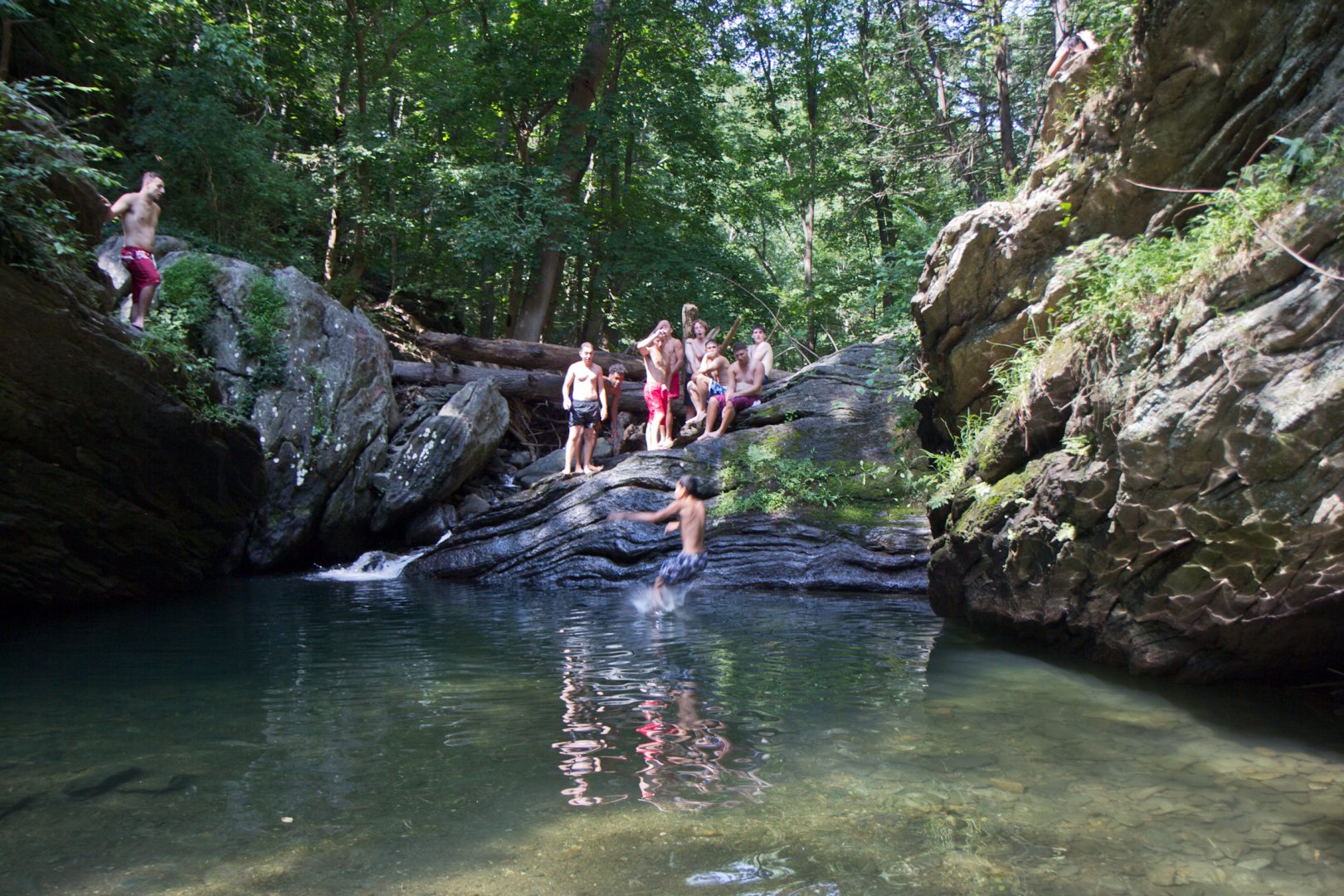 A swimmer jumps into the Devil’s Pool in Fairmount Park in Philadelphia. (Kimberly Paynter/WHYY) 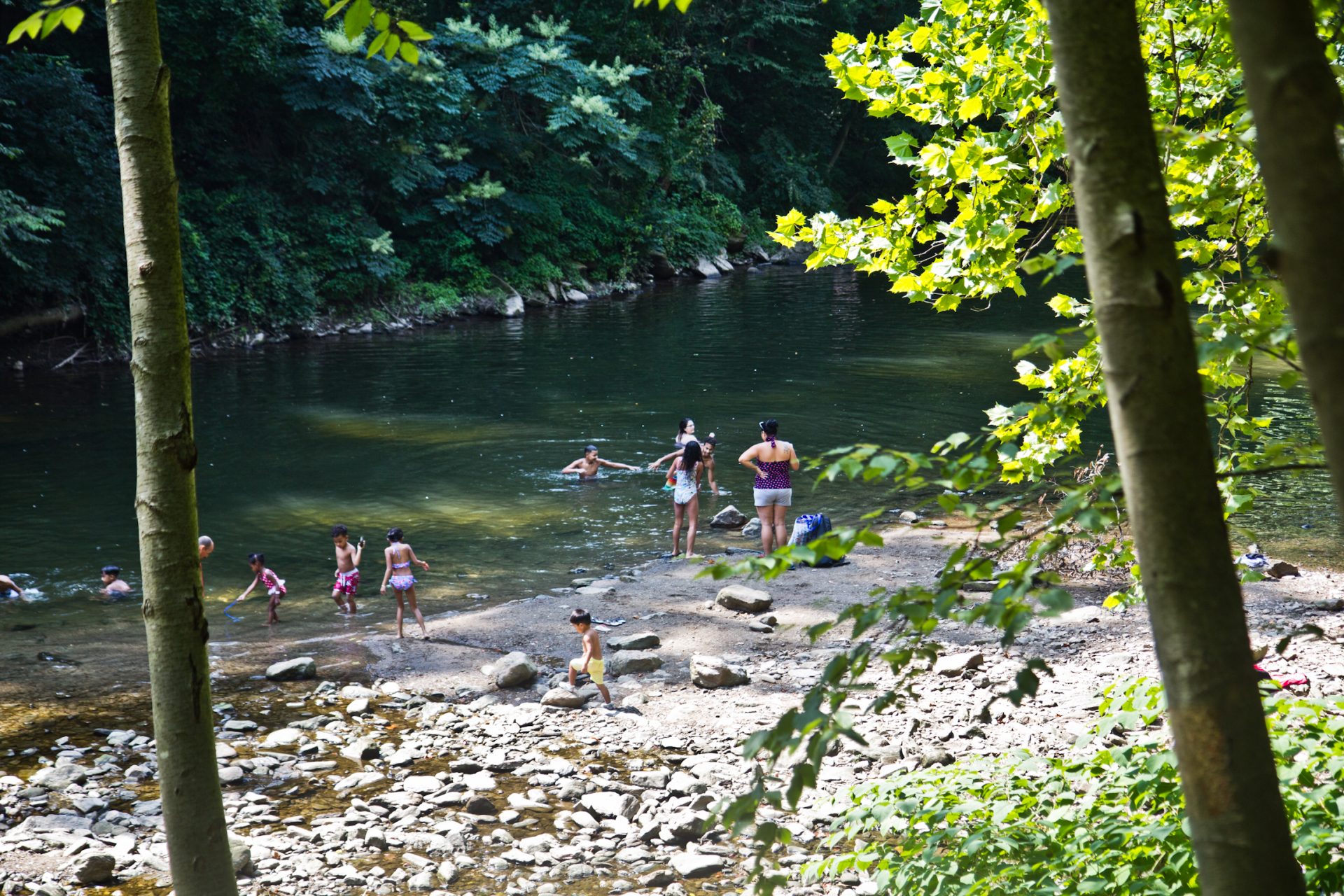 Swimmers get cool in the Wissahickon Creek in Fairmount Park in Philadelphia. (Kimberly Paynter/WHYY)

On a summer day, taking a dip in the creek at Philadelphia’s Wissahickon Valley Park might seem like a really good idea. The stream is surrounded by birches, sycamores and poplars, it’s quiet and secluded — unlike the 71 public pools the city offers — and the water looks pristine.

Philly’s most popular swimming hole is here: Devil’s Pool gets an average of 400 visitors per day during peak season and as many as 1,200 visitors at really hot times like last Fourth of July, according to Friends of the Wissahickon, the organization that takes care of the 1,800-acre park. Kids play and swim in the creek, parents picnic in the shade, and teens and twentysomethings jump into the water from rope swings.

The bravest climb up to 15 feet while friends capture the odyssey on their smartphones. Danger is exciting at that age.

“It’s a lot of fun, I mean, jumping off of there,” Katie Cornelius, an 18-year-old from New Jersey, said after cannonballing at Devil’s Pool. “I’ve never had an experience like that. It’s pretty awesome.”

But there’s hidden danger lurking in this water. It’s not just rocks and strong undercurrents that make this spot dangerous and forced the city to close access to Devil’s Pool during summer weekends. The water itself could also make people sick.

The Wissahickon Watershed consists of 64 square miles, and its headwaters are not in a beautiful mountain setting. The source of the creek is underneath a shopping mall parking lot in Montgomery County. From there, Wissahickon Creek flows through 15 heavily developed municipalities before reaching Philadelphia.

Runoff, especially during heavy rains, carries all sorts of contaminants from streets and parking lots into the creek, McCarthy said — including poop. About a million people visit the park every year, and many of them bring their dogs.

Add chemicals like oil and road salt, fertilizers, and occasional leaks from septic systems in Chestnut Hill and from industry. In 2006, for example, pharmaceutical company Merck leaked potassium thiocyanate, killing more than 1,000 fish and forcing the city to shut off drinking-water intakes. All this can make people sick, McCarthy said..

“It’s OK if you get your feet wet. But if you’re older, you know, if you’re with your children, you really don’t want to be taking the chance of what you might find in that waterway,” she said. “Don’t put your babies in it. In fact, I’m not even super keen on people leaving their dog drink it.”

A sign near the Devil’s Pool indicates that swimming in the creek is forbidden.(Kimberly Paynter/WHYY)

Most park visitors have no way of knowing this, though. A few signs in English and Spanish inform that swimming is not allowed, with no further explanation. And because the water looks clean, people think it’s safe.

“It’s good,” said Tommylee Cruz, a 17-year-old Philly resident who was swimming in the creek on a recent afternoon.

“I’d say it’s not bad because we can swim in it and I didn’t get sick,” said Kyle Parker, 17, after jumping into the creek from a tree branch. This was his fourth time swimming in the Wissahickon.

“It’s very clear,” said Cornelius. “I’ve never heard of anything biting anyone or anything like that, so it’s always a good sign.”

Actually, it’s not a good sign if there aren’t a lot insects living in the creek.

Friends of the Wissahickon staff working at the Devil’s Pool site try to warn people about the poor quality of the water. But Amaor Brawner said most people don’t listen.

“They’ll say nothing, like they’ll probably be thinking, ‘Well, we’ve been doing this for so long, nothing ever happened.’ So they probably just look and they just walk off,” said Brawner.

Julia Raskin, who also works at the pool area, said families have been coming here for generations. And that’s not something they want to lose.

“We don’t want people to feel like they can’t come here, but we want them to know what they’re putting themselves into,” she said, laughing.

Tests by the Philadelphia Water Department show that although the water’s quality is improving, the creek is still not clean enough to swim in. The last comprehensive report for the Wissahickon was done 10 years ago.

In 2003, the U.S. Environmental Protection Agency listed Wissahickon Creek as impaired, meaning that it doesn’t meet the water-quality standards of the Clean Water Act. Last year, 13 municipalities (including Philadelphia), environmental nonprofits, and four sewer authorities in  the watershed area formed the Wissahickon Clean Water Partnership, to create a solution for a cleaner creek and meet the regulations. But their goal is not to make a swimmable creek.

“As an urban waterway, there’s just going to always be some pollution issues, whether it’s E. coli, or nutrients, or pesticides,” said Gail Farmer, who runs the Wissahickon Valley Watershed Association.

This week, to protect public safety, a task force formed by city officials and community members decided to block access to the Devil’s Pool area during summer weekends, starting Saturday, Aug. 18. Access to the rest of the park will remain open, but swimming anywhere in the creek is not allowed.