In this Feb. 25, 2010, file photo, an Exelon Corp. employee walks past equipment in the turbine building at the Oyster Creek Generating Station, a nuclear power plant in Lacey Township, N.J. Shutting down the site of the nation's oldest nuclear power plant will take 60 years and cost $1.4 billion, according to a plan filed May 21, 2018, by a subsidiary of Chicago-based Exelon Corp. and under review by the Nuclear Regulatory Commission.

Environmentalists happy facility would be cleaned up faster than originally planned, but concerned about details 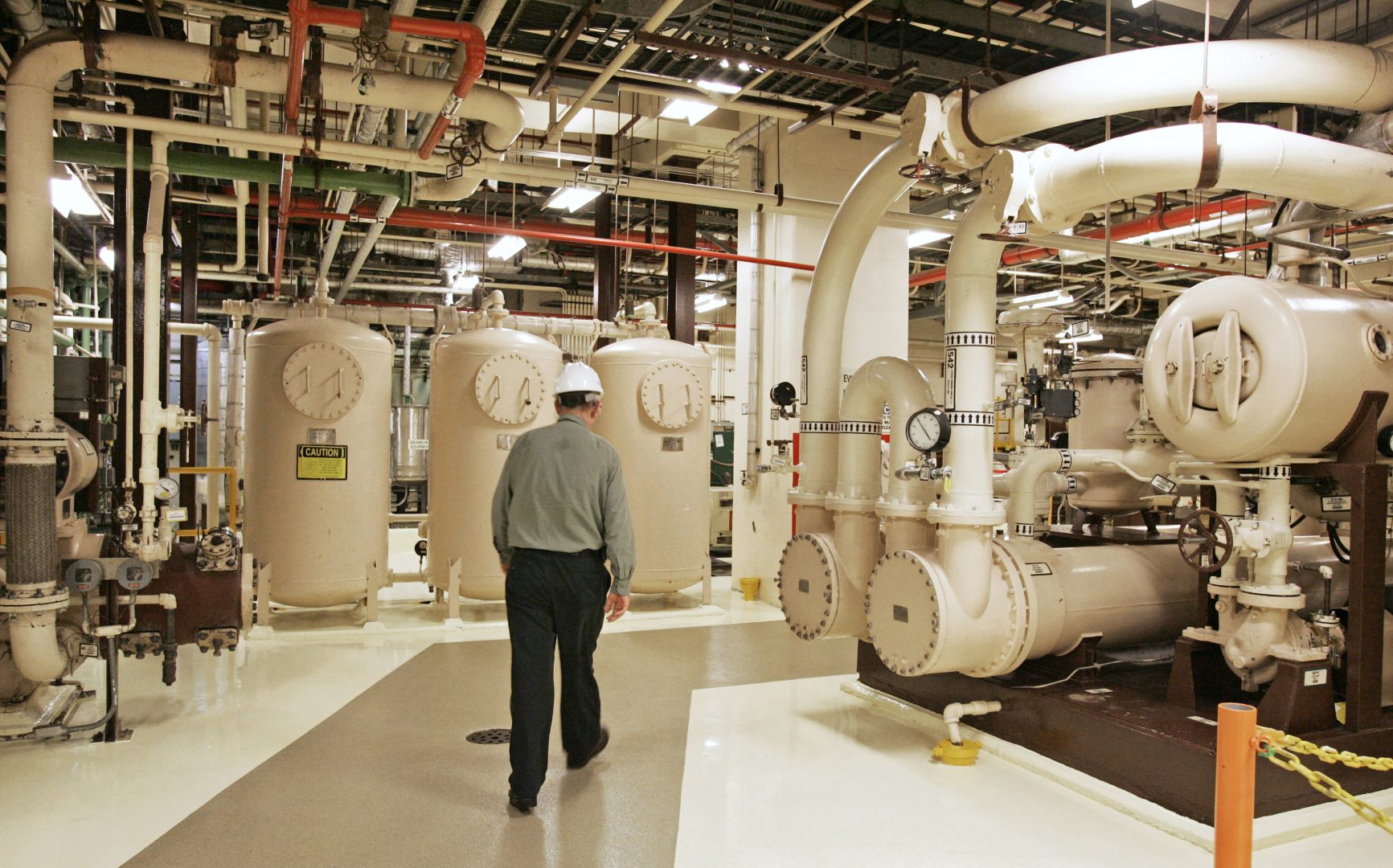 In this Feb. 25, 2010, file photo, an Exelon Corp. employee walks past equipment in the turbine building at the Oyster Creek Generating Station, a nuclear power plant in Lacey Township, N.J. Shutting down the site of the nation's oldest nuclear power plant will take 60 years and cost $1.4 billion, according to a plan filed May 21, 2018, by a subsidiary of Chicago-based Exelon Corp. and under review by the Nuclear Regulatory Commission.

Exelon announced Tuesday it has agreed to sell the Oyster Creek nuclear power plant to Holtec International, a step that could accelerate the decommissioning of the nation’s oldest commercial nuclear unit to just eight years.

The purchase of the 636-megawatt plant will not affect the scheduled shutdown of the facility by October. Holtec, a company involved in used nuclear-fuel management technologies, will assume all decommissioning and restoration activities on the 700-acre site in the Forked River section of Lacey Township.

The sale of the plant, terms of which were not disclosed, comes as Exelon is in the midst of seeking approval for a decommissioning plan that would end in 2078. At a public hearing on the closing earlier this month, there was much criticism of taking 60 years to shut down the facility.

Eight years instead of 60

Holtec plans to contract with Comprehensive Decommissioning International LLC to do the decommissioning of the plant. With its experience and technologies, CDI is equipped to decommission the plant within eight years, according to Holtec.

Holtec will submit a new decommission plan to the Nuclear Regulatory Commission. The plan could involve shipping the spent nuclear fuel at the site, now stored in dry casks, to an interim storage facility in New Mexico, for which Holtec has submitted a license. If approved, it would accept spent nuclear fuel from Oyster Creek and other nuclear units across the U.S., according to the company.

If licensed, Holtec said it would permit the fuel to be shipped off site to New Mexico and allow the full site to unrestricted use once the fuel has been transported off-site.

Environmental groups are likely to have problems with that scenario. “We’ve always been against interim storage,’’ said Janet Tauro, New Jersey board chair of Clean Water Action, referring to the shipping of the fuel thousands of miles. “It’s a very grave public risk.’’

It also faces big hurdles in licensing. “When you are talking about a repository for off-site waste, it’s been very difficult to do,’’ said Paul Patterson, an energy analyst at Glenrock Associates in New York. He cited Yucca Mountain, Nevada, the long-delayed site for permanent nuclear waste disposal.

Exelon, the nation’s largest operator of nuclear power plants, has outsourced the decommissioning of one of its facilities in the past. At its Zion station in Illinois, Exelon Generation partnered with ZionSolutions to complete its decommissioning activities, according to Suzanne D’Ambrosio, site communications director for Oyster Creek.

In that instance, Exelon Generation retained ownership of the land, used fuel and independent spent fuel storage installation, all of which will transfer back to Exelon upon completion of the decommissioning activities.

Holtec, which has 30 years of experience in used-fuel management, was selected after a formal competitive proposal, according to D’Ambrosio. “Holtec has a strategy that will significantly reduce the time necessary for site decommissioning and they have the experience and the technology to carry that out,’’ she said.

With nuclear power plants across the country struggling to compete with cheaper natural gas units, a half-dozen stations have closed in recent years. The closures have spurred a number of companies to specialize in decommissioning activities, according to Neil Sheehan of the NRC. “It is something of a growth industry,’’ he said.

Jeff Tittel, the New Jersey Sierra Club’s director, said his concern is Holtec may cut corners in an effort to do the decommissioning more swiftly and cheaper.

“It’s important that Oyster Creek will be cleaned up quicker than the original plan, but we want to know more about the goals of Holtec and their own cleanup plan,’’ he said.

The sale, projected to close in the third quarter of 2019, requires the approval of the NRC and the New Jersey Board of Public Utilities. Before the sale could take place the companies involved would need to apply to the NRC to transfer the plant’s license, Sheehan said.

“We would review the proposal to ensure the new owner had the technical and financial capabilities to safely decommission the plant and to appropriately manage the spent nuclear fuel until such time there is a permanent or interim repository able to receive it.”

Holtec said it would try to offer jobs to Oyster Creek employees upon the closing of the nuclear facility in October. Approximately 300 employees will transition to Holtec, according to D’Ambrosio.