Archaeology students from West Virginia University at a dig near a shale gas site in Marianna, Pa.

Companies don't have to check for archaeological importance. One study showed dozens of sites were damaged or destroyed 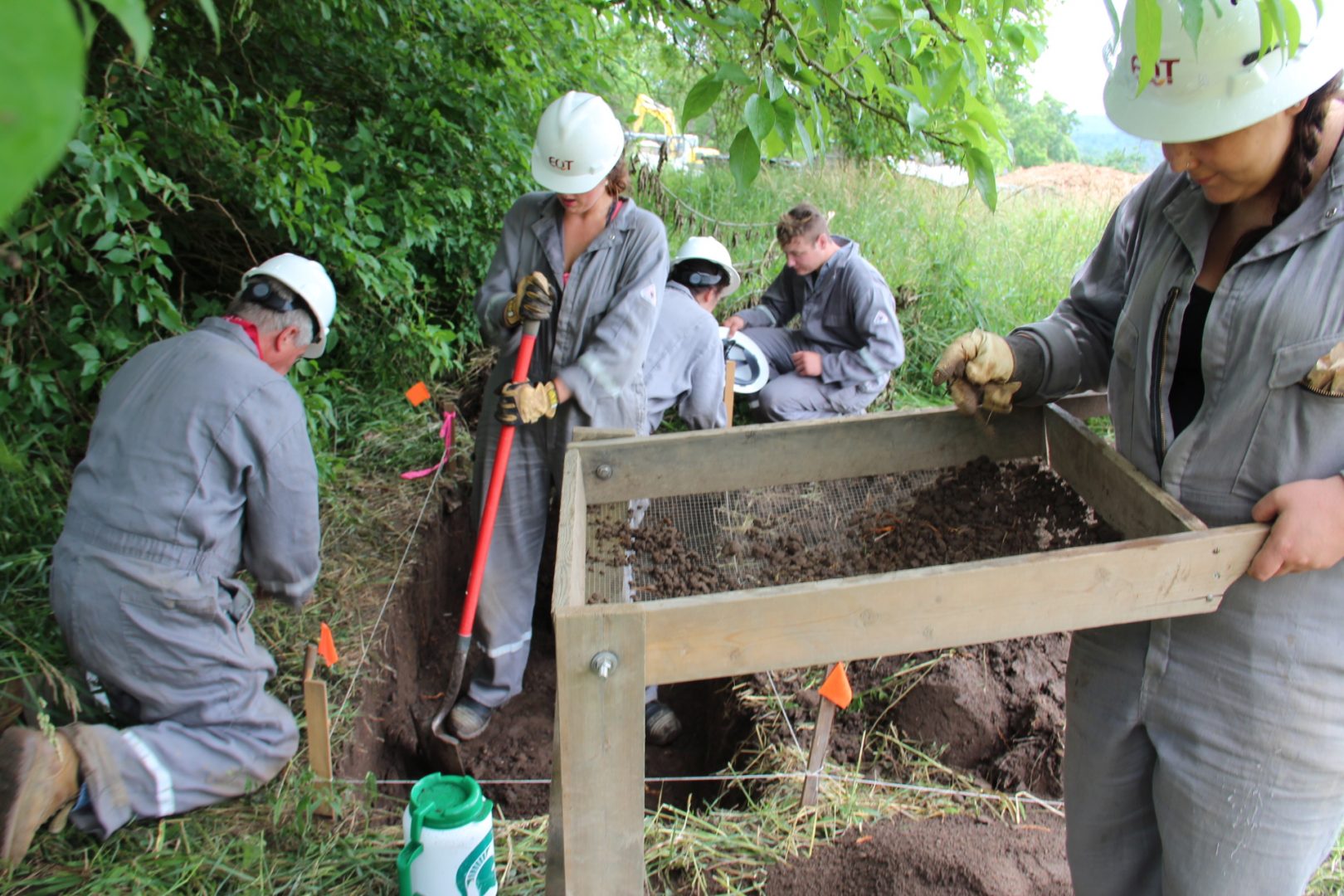 Archaeology students from West Virginia University at a dig near a shale gas site in Marianna, Pa.

At the edge of a field in Washington County, a group of archaeology students picked away at a shallow pit on a recent afternoon, searching for fragments of history hundreds of years old.

Over the past few weeks, the students had dug through the soil and found an arrowhead, bits of pottery, and an intriguing cluster of rocks more than a foot below the ground.

“We don’t quite know what it is, but the rocks (normally) should not be there,” said John Nass, a California University of Pennsylvania archaeologist supervising the dig.

As the students dug, they were in a kind of race against another excavation a few feet away. Just over the hill, construction vehicles crept up and down a recently-built access road toward a well pad on a neighbor’s property. EQT is building a well site that could house 16 shale gas wells, each going thousands of feet underground.

To store enough water to hydraulically fracture these wells, the company wants to build an impoundment–or artificial pond–in this field, and across the road from the house of Rose Friend, who owns the land. Friend’s family opposes the placement of the impoundment so close to the house. One argument the family is making is historic preservation.

LeBlanc grew up on the land. Her mother is 81, and recently underwent chemotherapy. LeBlanc says she wants EQT to move the impoundment away from her mother’s house, which would also put it farther away from the archaeological site.

“We’re fighting every step of the way,” said LeBlanc. 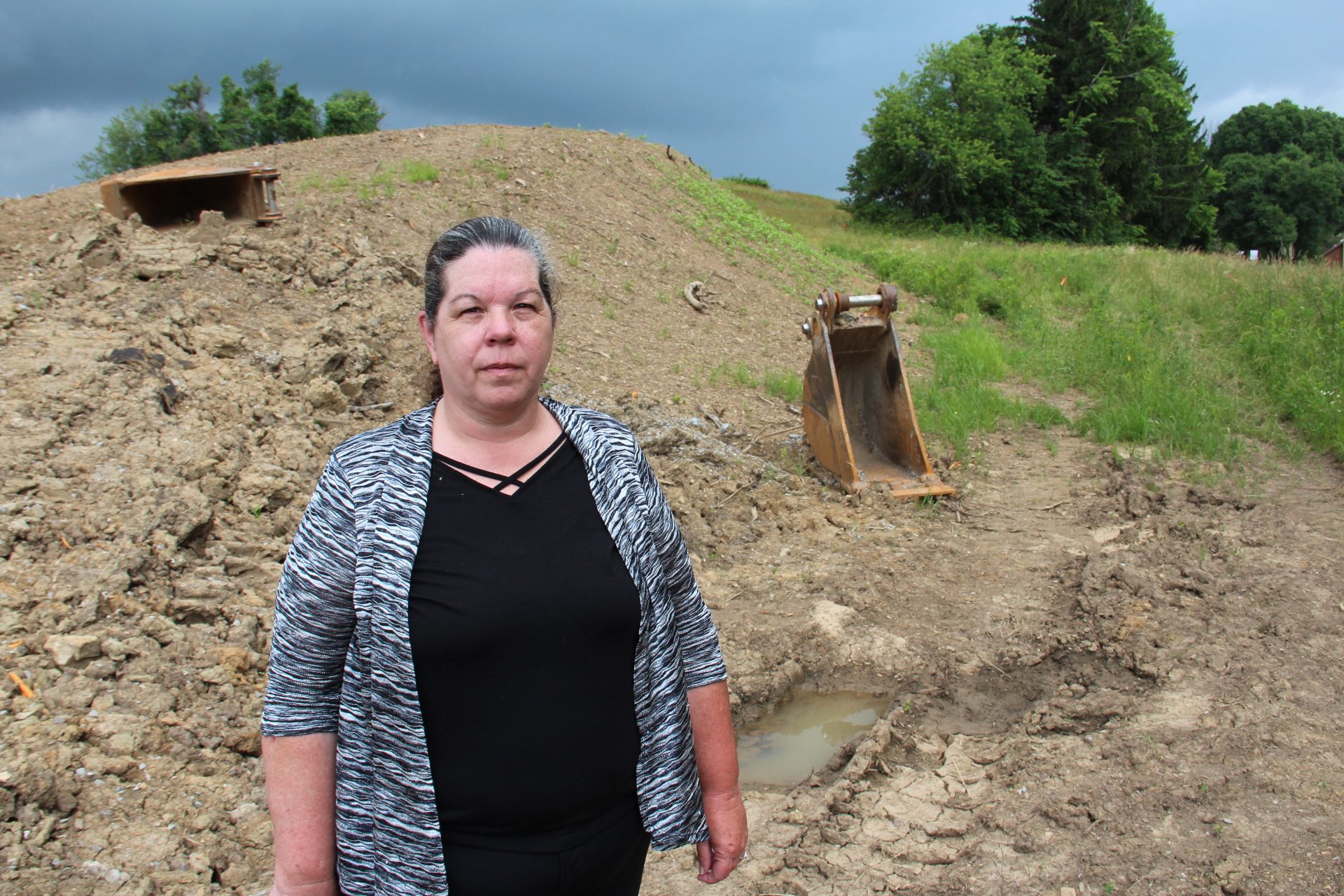 Karen LeBlanc wants a shale gas site moved further from her family’s Washington County house, and off of a suspected Native American site.

She doesn’t think the lease her mother signed 11 years ago gives EQT the right to decide where the impoundment is built–but the company disagrees. The two sides are fighting over the agreement.

She says the family has known about the historic aspect of the land for generations. About 80 years ago, so the story goes, her uncle discovered the remains of a Native American.

“He was out plowing for corn in the field and the plow struck the skull,” she said.

LeBlanc is worried that if it digs up the field, EQT could be destroying a piece of Washington County’s past. This bothers her for two reasons. The first is one of her female ancestors was Cherokee Indian. And the second reason is simple humanity, she says.

“If this is your final resting place why do we need to disturb you. You were there first. You have your right to remain there,” she said.

To press her argument, she invited Nass and other local archaeologists to excavate the site. Her family’s story illustrates the impact of a loophole in Pennsylvania’s historic preservation laws that allows oil and gas companies to ignore a site’s archaeological importance when deciding where to build.

LeBlanc’s uncle ended up re-burying the bones he found, she says, to prevent looting. In 1981, the state placed the farm on its archaeological survey, a running list of potentially significant sites.

But because of a loophole in state law, EQT wasn’t required to check that list before it started work.

In an email, a spokeswoman for EQT said that in response to LeBlanc’s “credible claim” that the site held human remains, the company hired an archaeologist to survey the site, and put a hold on construction there.

“When landowner concerns arise, EQT works diligently to address them, while simultaneously adhering to the rules and restrictions of numerous governing agencies,”spokeswoman Linda Robertson said.

EQT’s evaluation is ongoing, and when it’s over, the state will review it, and make recommendations about how to mitigate — or offset — any damage the project would do, said Howard Pollman, spokesman for the Pennsylvania Historical and Museum Commission (PHMC).

But even if the site is found to have a significant trove of archaeological importance, nothing in state law prevents EQT from basically doing what it wants here, Nass says.

An arrowhead recovered at the Marianna, Pa. site.

“For private property, there’s nothing we can really do about it. If you bought property that had a (historic) site on it, technically it belongs to you, even if it’s recorded with the state. You could bulldoze it away if you wanted to.”

The reason for this is that the strength of historic preservation laws in Pennsylvania depend on a broad set of factors. Projects receiving federal permits or grants — like highways or pipelines — need to undergo archaeological review.

In theory, the same is true for projects that require a state permit — like oil and gas wells. Those reviews are sent to the PHMC, which can advise projects on how best to preserve the state’s archaeological sites.

But some permits issued by the Pennsylvania Department of Environmental Protection are subject to a “10-acre exemption.” If a project is under 10 acres, no review is needed. And the vast majority of the state’s 11,000 shale gas wells are under 10 acres in size.

That means companies — like EQT — don’t even need to check to see if their well pad is already listed on the state’s registry of historic sites.

“If the drill site is 10 acres or less, then (PHMC) is never notified. And so in that instance even known sites could very well be destroyed or affected,” said Ben Ford, an Indiana University of Pennsylvania archaeologist.

One 2012 survey found that in Washington County alone, 60 known sites were damaged or destroyed by gas drilling. The development impacted at least “nine habitation sites, three burial mounds, and two villages” each with a “high potential for containing human remains.”

Ford thinks state law is allowing the needless destruction of the state’s cultural and historic heritage. He’d like to see these laws get stronger. Doing away with the 10-acre exemption would be a good start.

Artifacts recovered from a Washington County site EQT is developing.

Even if a development can’t be altered to protect archaeological artifacts, Ford says sometimes excavations can be done before construction starts to glean as much as possible from a historic site.

“The goal is never to stop development,” he said. “It’s to balance our need as a nation to move forward with our desire to understand and know and maintain our heritage. We’re trying to strike that balance, and in my opinion the the current Pennsylvania state law has disrupted that balance.”

The 10-acre exemption came about after the passage of a state law in 1995 — Act 70 — which weakened the PHMC’s ability to protect historical sites. The law placed the financial burden of archaeological surveys on taxpayers, not developers, and limited the amount of time those reviews could take. The law was pushed forward at the behest of home builders, not the oil and gas industry.

Howard Pollman, spokesman for the PHMC, said that even in cases where the agency reviews a project and concludes that it would disturb an important historical site, it can only recommend actions, not mandate them.

“We are strictly consultants,” Pollman said. “We don’t have the authority (to stop or alter a project) — the permitting organization does.”

Paul Raber, an archaeologist who used to work for the PHMC, says one of the benefits of doing a review of sites before construction is that it typically involves some type of field survey. That can yield valuable information beyond just checking the state’s inventory of 18,000 or so ‘known’ sites.

“The problem is that the inventory of known sites is a small fraction of the total possible sites out there,” Raber said. “We know that there are probably tens of thousands of sites out there that we don’t know about. And that’s why the first stage in this process is always survey.”

That could prove doubly true in Washington County, which is home to the oldest known archaeological site in North America. Archaeologists have dated the site at Meadowcroft, in Avella, Pa. to 16,000 years old.

A few pieces of that history could be hidden in the red dirt on Rose Friend’s property, in Marianna. Nass, the California University archaeologist, thinks the site could be hundreds of years old. “The people who lived here–we don’t know what they called themselves. Archaeologists called them the Monongahela tradition.”

This group lived in Washington County between 1000 A.D. and the 1630s. Nass says the point of studying these people is always to understand who lived here before we did.

“We want to know about them–how they’ve survived…how they coexisted,” he said. “It’s really trying to document the human effort, the human story. And because if we don’t (do that) in archaeology, it will never be documented.”