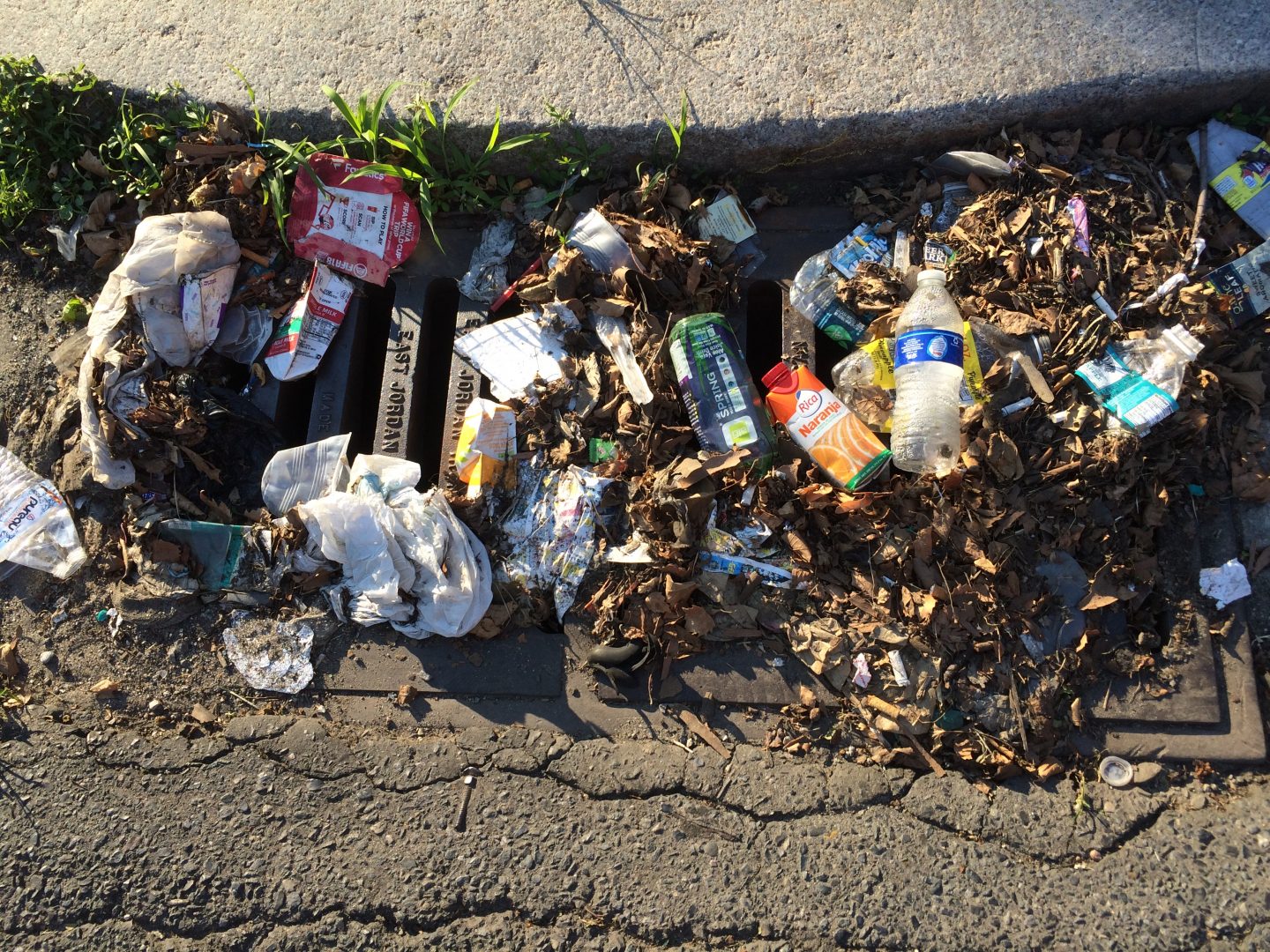 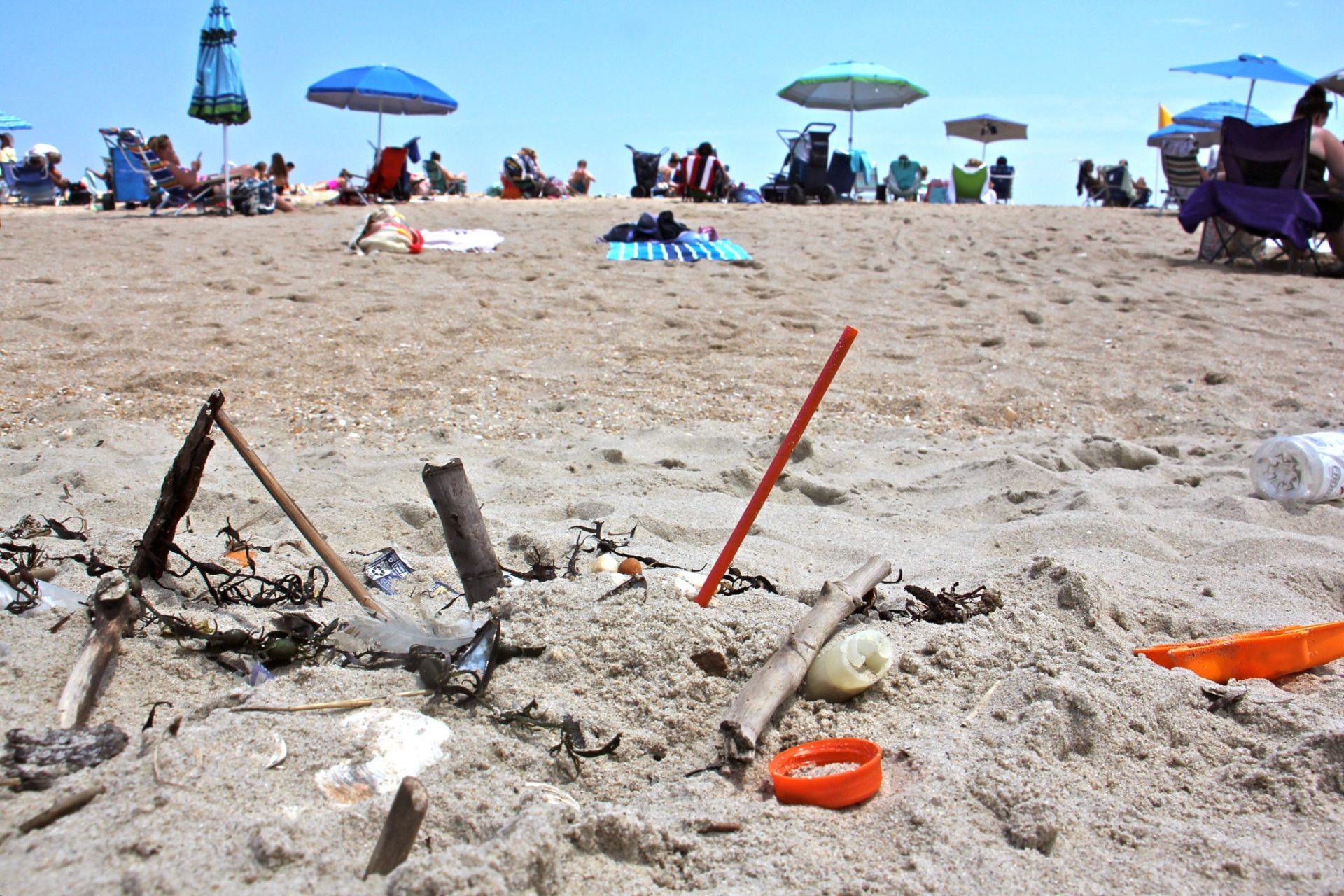 While beach towns in New Jersey and Delaware work to curb the use of plastic straws, bags, containers, and even balloons, researchers say it appears the real problem lies upstream in cities and towns far from lapping ocean waves.

Kelly O’Day is a retired wastewater engineer who has devoted his free time to battling litter in Philadelphia. At a storm water inlet on the corner of West Loudon and North 7th streets in North Philadelphia, he points to plastic trash that has accumulated by the metal grate.

“When you get enough flow of water, that plastic bottle will make its way … to the storm water inlet,” O’Day said.

When it rains, water washes down the street, pushing plastics and other trash into the storm water drain. Those openings on the curb were designed to capture rain water and prevent flooding, not serve as public trash cans. But researchers say more and more trash is making its way from those drains to the ocean.

The City of Philadelphia has more than 75,000 storm water inlets, and they are built with grates designed to trap the larger items. But the smaller pieces of trash slip through. And over time, some of the larger items break down.

In 2017, city crews removed 67 tons of litter, including large items like tires and shopping carts, from the storm water system. The Water Department also operates three marine vessels that clean up trash from the Schuylkill and Delaware rivers. Last year, they removed more than 12 tons of trash from both rivers. 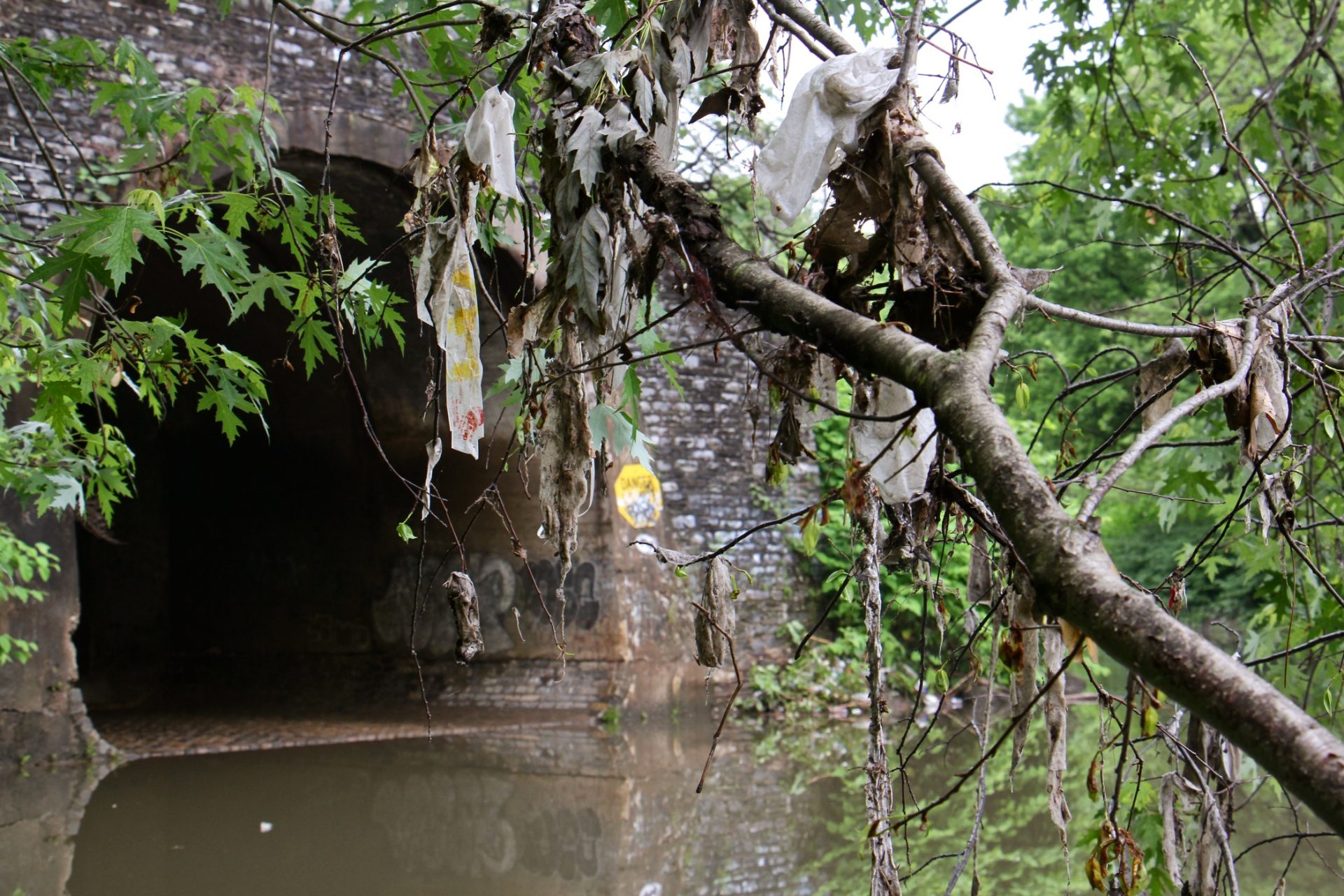 The Wingohocking combined sewer outfall carries storm and sewer water into the Frankford Creek as well as trash from places like the Logan Triangle. The banks and tree branches become tangled with trash. (Emma Lee/WHYY)

Still, the drains serve as conduits, transporting rain water and plastics underground through the sewers to wastewater treatment plants. During heavy rains, that water, along with sewage, can carry the plastic trash directly into creeks, rivers, bays, and eventually the ocean.

Three miles downstream from West Loudon and North 7th streets, O’Day points to a giant stone tunnel that empties into the Frankford Creek during heavy rains. It’s the largest storm water outfall in the city.

Jonathan Cohen is an assistant professor in the School of Marine Science and Policy at the University of Delaware. He researches pollution in the Delaware Bay, focusing on microplastics, tiny pieces of plastic less than five millimeters long.

Some of those microplastics are manufactured; others result from the breakdown of larger pieces. In 2015, the Obama administration banned the manufacturing, packaging, and distribution of rinse-off cosmetics containing plastic microbeads, tiny pieces of plastic found in health and beauty products.

Last year, Cohen collected samples from 16 collection stations on the Delaware River and found them at every site. 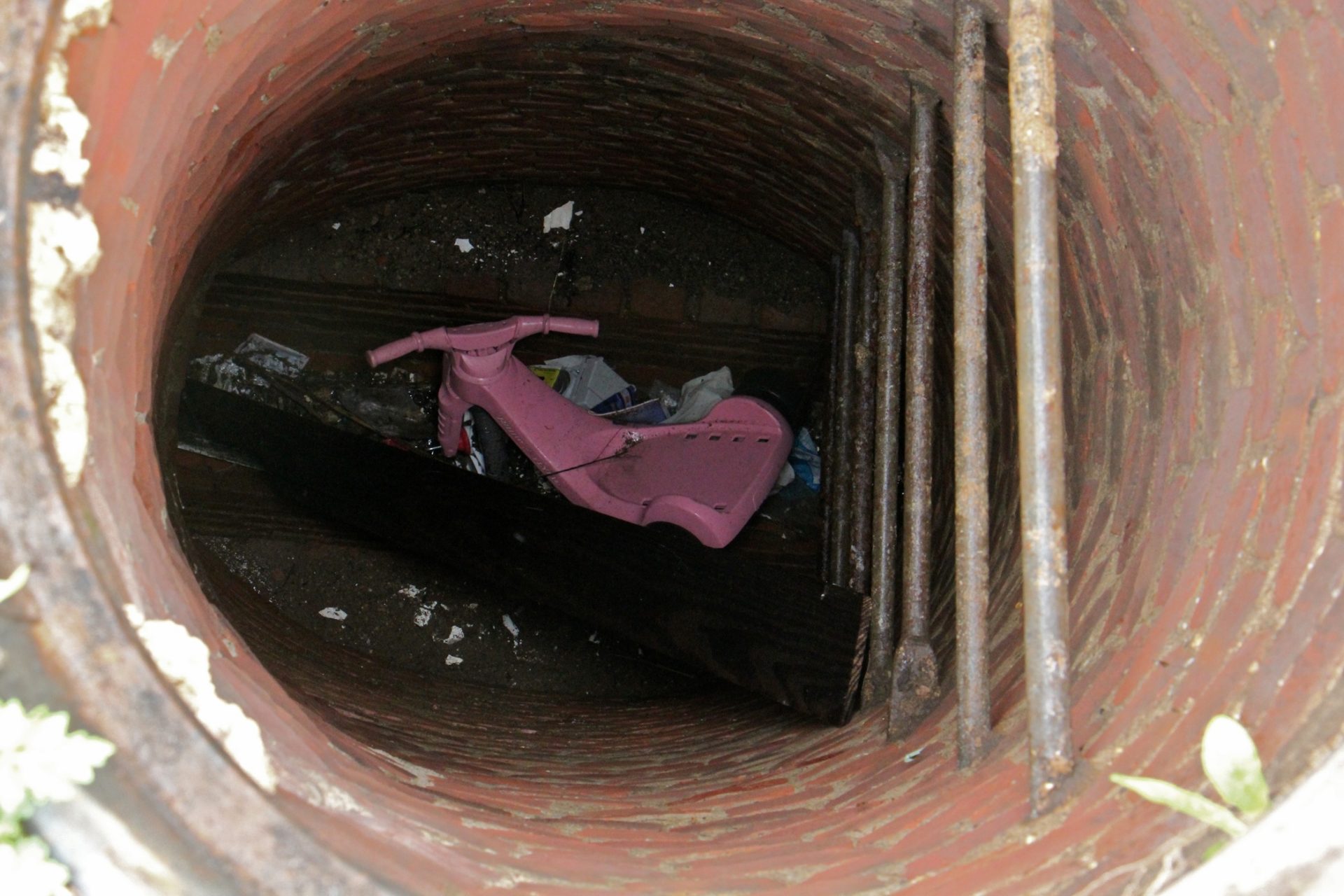 Plastics, large and small, often end up in urban sewer systems like this one in Philadelphia. The smaller pieces can end up polluting rivers, streams and oceans.

Cohen’s research shows that cities like Philadelphia and Wilmington could be the largest source of these tiny bits of plastic floating around in the Delaware Bay and ending up in the ocean. He also saw the amount of plastics increase after heavy rains. He says ocean pollution is more likely to originate in urban areas, rather than with seasonal beachgoers.

“It doesn’t seem to be the increased number of people in the summer that generates more microplastics that we’re measuring in the environment,” Cohen said. “What does seem to relate to the microplastics that we see is urbanization” — more people using more disposable plastics, which end up in waterways.

A report by the World Economic Forum predicted that by 2050, pound for pound, there will be more plastics than fish in the world’s oceans.

Scientists say the presence of plastics in our waterways and our beaches is not only an aesthetic concern. It also threatens birds, fish and mammals. They either get entangled by it, or they’re eating it, and in many cases it makes them sick.

Plastics are manufactured using petroleum products. So a question scientists are trying to answer is how much of those hydrocarbons are absorbed by aquatic organisms, and in turn, people who eat fish.

Cindy Zipf is the director of the Clean Ocean Action, an organization that has been doing beach cleanups along the Jersey shore, twice a year, for the last 33 years. After collecting the trash, they document their finds.

Zipf says the trend over the years includes an increase in plastics. According to the organization’s 2017 report, a record 84 percent of items collected were plastic or foam plastic.

Single-use, disposable plastic items accounted for 66 percent of the total items collected. Zipf said some of them have dates that go back more than 50 years, and that every year, they find something new.

“The latest, newest item we’re finding on the beach are these individual single-use teeth cleaners that have a toothpick on one end and a piece of floss on the other end,” Zipf said.

Zipf says no matter where you live, she hopes people become more aware of the problem.

“That fork that you just used to eat that salad for whatever many minutes, now it will last for hundreds and hundreds of years,” Zipf said.

To combat plastics pollution, environmentalists like Zipf are adding a fourth ‘R’ to the slogan reduce, reuse, recycle. They want people to refuse plastics.