Built in the 1930s and upgraded in 2016, the 12-inch line would temporarily carry natural gas liquids 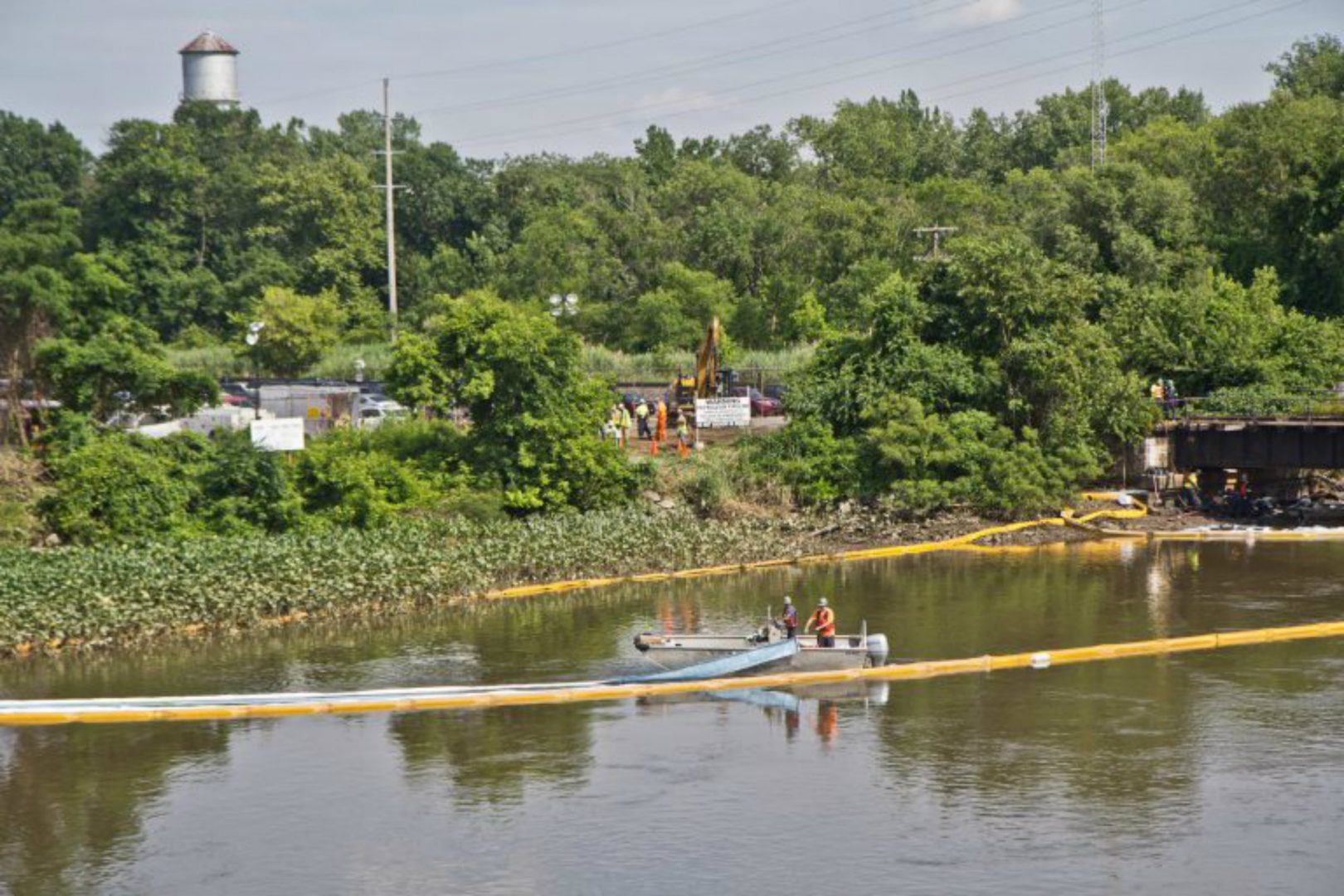 A 12-inch pipeline that Sunoco plans to use to carry natural gas liquids along unfinished parts of the Mariner East route appears to be the same line that recently leaked gasoline into a creek near Philadelphia International Airport, according to  government mapping data and Sunoco’s own statements.

Sunoco wants to repurpose part of the pipeline that runs from Point Breeze near Philadelphia to the Montello terminal at Sinking Spring, near Reading in Berks County. The line would carry propane, ethane and butane while Mariner East 2, the first of the new pipelines, is being completed. The company said the stretch to be converted runs between Wallace and Middletown townships, a distance of about 25 miles.

The company has informed state and federal regulators that it plans to convert the existing pipeline from carrying petroleum products such as gasoline, and reverse the direction of flow, so that it can begin supplying customers with natural gas liquids before completion of the long-delayed Mariner East 2.

Conversion of the 12-inch pipeline, which, like the repurposed Mariner East 1, was built in the 1930s, has renewed claims by opponents of the Mariner East project that public safety is at risk, this time by the use of a line that has leaked at least three times in its history, according to federal data as well as state and local officials.

The latest leak was first reported in mid-June at Darby Creek in Delaware County.

Sunoco acknowledged on June 26 that its 12-inch refined products pipeline was the source of the leak that was first reported a week earlier by the crew of a freight railroad that runs across the creek. Sunoco has not specified the product that leaked, but it was identified as gasoline by Pennsylvania’s Department of Environmental Protection, and by the manager of an adjacent national wildlife refuge. 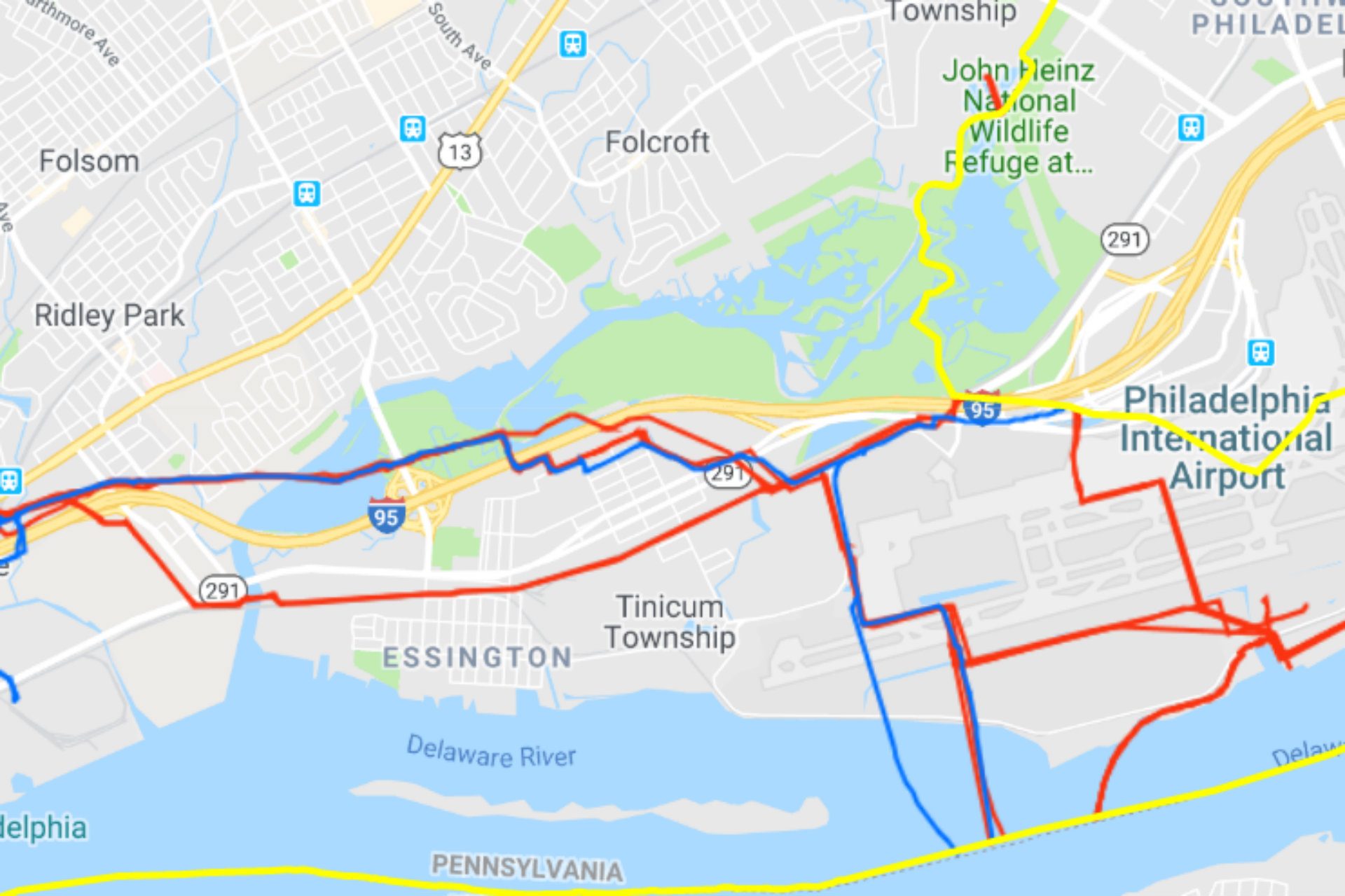 The map shows the location of a 12-inch pipeline, in red south of Interstate 95, that appears to be the one Sunoco plans to use to carry natural gas liquids until Mariner East 2 is completed. In June, the line leaked gasoline into Darby Creek where it crosses the creek, seen on the map at lower left near the icon for Route 291.

The National Pipeline Mapping System, operated by the federal Pipeline and Hazardous Materials Safety Administration, shows that the 12-inch line crossing Darby Creek near the Delaware River appears to be the same as the line that Sunoco plans to use for natural gas liquids.

An information box produced by clicking on the map where both the eight- and 12-inch pipelines cross Darby Creek identifies the subsystem name as “12-inch Point Breeze-Montello” – the same as that identified by Sunoco as the line that will carry NGLs while ME2 is being completed — and the operator as “Sunoco Pipeline LP.”

Lisa Dillinger, a spokeswoman for Sunoco’s parent company, Energy Transfer Partners, would not confirm whether the 12-inch line to be used for NGLs is the same one that leaked into Darby Creek. She said the company spent $30 million in 2016 to upgrade the 12-inch line, which was “inspected with in-line tools, and hydrotested” but declined to provide further details.

Dillinger said the company expects that use of the 12-inch line will enable it to put ME2 into service during the third quarter, which has been its target for some time despite many technical and regulatory delays.

Sunoco plans to start operating the 12-inch pipeline on Aug. 20, according to its “Operator Registry Notification” filed with PHMSA.

PHMSA didn’t respond to requests for confirmation that Sunoco plans to use that line for temporarily carrying NGLs.

Sunoco’s brief description of the upgrade won’t be enough to calm public concerns that using the 12-inch line to carry NGLs will subject communities in Philadelphia’s densely populated western suburbs to an additional risk of an explosion or fire if the line leaks the highly pressurized liquids, said Rich Kuprewicz, president of Accufacts Inc., a consultant on pipeline infrastructure.

“The devil is in the details that nobody seems to be able to get,” he said. “What has the operator done that would verify that this pipeline is suitable for service? If the operator has dealt with the potential threat that exists on this line, they should be able to say ‘This is what we did.’”

Kuprewicz said age does not necessarily indicate that a pipeline is unreliable, but argued that Sunoco needs to show the public that the 12-inch line is capable of operating safely.

“They want to be able to demonstrate that even though the pipeline is older, the quality of the steel is still good for the service they want to put it in,” he said. Even though Sunoco would be justified in withholding proprietary information on the pipeline, it should be able to disclose enough details to show that the pipeline’s integrity is not compromised, he said.

For example, Sunoco should say whether the pipeline contains electrically resistance-welded (ERW) pipe, a technique that, before it was modified, had a “long history of that type of pipe having a higher risk of rupture failure,” Kuprewicz said.

But any problems with that kind of welding can be addressed using techniques that are known to federal pipeline regulators, said Kuprewicz, who is currently advising West Goshen and Middletown townships on Sunoco’s construction of Mariner East 2 in their areas.

He urged Sunoco to be transparent and specific with the public over the condition of its pipelines rather than simply arguing that it meets regulatory requirements.

The company says it has all the necessary permits to use the section of the 12-inch line, and has notified state and federal regulators.

Sunoco plans to temporarily use a section of the 12-inch line for NGLs because the multibillion-dollar Mariner East 2 is at least 18 months behind the original schedule and still faces holdups including a shutdown in Chester County’s West Whiteland Township, where the PUC ordered a safety inspection.

In April 2015, the line leaked an unspecified petroleum product at Edgmont Township in Delaware County. Catherine Ricardo, the township manager, said the leak was first reported by a resident who detected a “gasoline type” smell. Sunoco responded immediately, and found the leak to be coming from a small puncture in the pipe which appeared to have been leaking for some time because a plume had formed in the soil, she said.

After a mandatory two-year monitoring process, officials recently determined that the plume has not expanded, and they will now remove the contaminated soil and replace it with clean fill, Ricardo said.

She said the puncture was likely caused by the installation of new utility poles which pushed down on rocks that hit the pipeline.

The 2015 incident was one of three resulting in soil and groundwater contamination that Edgmont cited in a March 2018 letter to the PUC, expressing “serious safety concerns” resulting from work on the Point Breeze – Montello and Mariner East 1 lines.

Edgmont Township resident Norm McQueen walks by one of many monitoring wells that have been drilled on his and neighboring properties to test for the spread of a petroleum product spill that he was the first to report in 2015.

Norm McQueen, the Edgmont resident who first reported the 2015 leak at the edge of his 4.5-acre property, said he’s worried about living about 150 yards from where the pipeline leaked, where the 12-inch line will temporarily carry NGLs, and a few yards from where ME2 will eventually be built.

McQueen, 77, a former pipe fitter at the Gulf Oil refinery that is now part of Philadelphia Energy Solutions, said his life has been dominated by the leak, the many monitoring wells that have been sunk on and around the property where he has lived for more than 40 years, and the worry that the contamination might spread to his private water well.

“It really disrupts your whole life,” he said, in an interview at his home. “I was thinking about selling but you can’t do anything until it gets straightened out.”

Elsewhere in the township, a contractor’s backhoe “dug into” a pipeline in March 1992, resulting in a “geyser” of petroleum product, Ricardo said. “That was a direct result of Sunoco’s subcontractors who were careless,” she said. According to PHMSA, almost 40,000 gallons of jet fuel leaked in the incident.

And in November 1987, the 12-inch line leaked about 70,000 gallons of gasoline at Ship Road in West Whiteland Township,  in a resident-reported incident that prompted a cleanup operation capturing about 60,000 gallons, according to DEP documents.

Eric Friedman, a member of Del-Chesco United for Pipeline Safety, a coalition of community groups in Delaware and Chester Counties, noted that the three leaks in the 12-inch line were all reported by parties other than Sunoco — as shown by public records in each case — which he said shows the company doesn’t do enough to ensure the safety of its infrastructure.

Sunoco could not be reached for a response to Friedman’s comments.

Sunoco says Mariner East 2, which is due to carry NGLs from the Marcellus Shale of southwestern Pennsylvania to a terminal at Marcus Hook in Delaware County, where most of it will be exported, will be operational by the end of September.