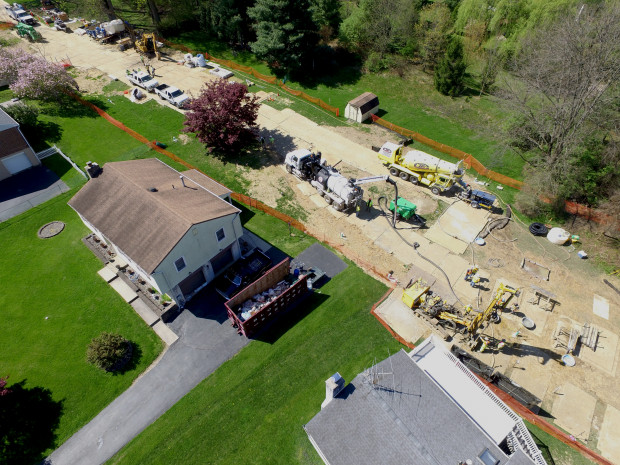 Mariner East 2 pipeline construction crews work in the backyards of homes on Lisa Drive in West Whiteland Township, Chester County, on May 2. Sinkholes that opened in the area prompted the state’s Public Utility Commission to order that an existing pipeline nearby, the Mariner East 1, be shut down until it could be determined that the sinkholes didn’t threaten its safety.

Update, 11:59 a.m. May 3: The Pennsylvania Public Utility Commission unanimously approved allowing Sunoco to re-start the Mariner East 1 pipeline. The 5-0 vote followed “an extensive investigation into safety concerns raised by the Commission’s independent Bureau of Investigation and Enforcement – which includes the PUC’s Pipeline Safety Section,” according to a PUC news release.

In a statement, Sunoco/Energy Transfer Partners said it was “very happy” with the PUC’s decision.

“When ME1 was shut in as a precautionary measure there were no issues with the pipeline, which has been safely operating for decades.  Its continued safe operation has now been verified by all parties. The procedures to restart public utility service on the pipeline will begin immediately.”

Safety inspectors at the Pennsylvania Public Utility Commission recommended that Sunoco’s Mariner East 1 pipeline be restarted after a nearly two-month shutdown prompted by sinkholes that appeared at a pipeline-construction site in Chester County’s West Whiteland Township.

The Bureau of Investigation and Enforcement said it was satisfied that the integrity of the pipeline had not been compromised by the sinkholes that led the PUC to issue an emergency order on March 7 closing down ME1 until the safety of the line could be confirmed.

PUC Chair Gladys Brown said at the time that there could be “catastrophic” consequences if ME1, which carries natural gas liquids, was breached because of its proximity to the sinkholes and to construction of the Mariner East 2 and 2X pipelines at the same site, Lisa Drive.

In early March, the Bureau asked the commission to suspend ME1 operations until it was satisfied that the line’s integrity had not been impaired by the sinkholes, which it said were as much as 20 feet wide and 15 feet deep.

Now, the Bureau says it is satisfied that there’s no threat to the integrity of ME1, which was built in the 1930s and previously carried gasoline to western Pennsylvania. Since the natural gas boom in the Marcellus shale starting in the mid-2000s, the line has been repurposed to carry propane, butane and ethane from western Pennsylvania eastwards to a terminal at Marcus Hook in Delaware County.

The Bureau said it is “of the opinion that the integrity of the ME1 pipeline has not been compromised by the soil subsidence events that triggered this investigation, and consequently I&E does not oppose SPLP’s request to resume transportation service on its ME1 pipeline.”

The PUC first estimated the investigation would take 10 to 14 days. Sunoco later said it needed to do an additional investigation that would take four to six weeks, and offered to pay for the temporary relocation of residents of the five homes on one side of Lisa Drive because of the disruption caused by excavation in their back yards.

Sunoco said in an April 27 filing with the PUC that it had done “comprehensive” integrity and geophysical tests and had investigated the geology of the area behind the Lisa Drive homes.

“The testing showed that there was no, and is no, impairment to ME1 from the subsidence; that there are no integrity issues preventing the pipeline from restarting, and that geological conditions at the site are suitable for the continued operation of the line,” the company said.

To provide extra protection to the “subsurface,” Sunoco said it would use open-cut construction – in which a pipeline is laid in a trench – rather than the previously planned horizontal directional drilling (HDD) for the remainder of Mariner East 2 construction at the Lisa Drive right-of-way.

“SPLP appreciates that safety concerns trump economic concerns,” the company said in its filing. “However, here the safety allegations have been resolved and the continuing economic impact of this shut-down should be neither disregarded nor compounded by delay.”

Andrew Neuwirth, an attorney for Lisa Drive homeowners Russell and Mary March, who have sued Sunoco, rejected the company’s assurances that ME1 is safe and the geology is stable.

“I believe that the damage to the subsurface and the community has already been done and likely cannot be repaired,” Neuwirth said in a statement. “I believe that Sunoco has already caused damage to home values in the area. Nobody trusts Sunoco’s pronouncements and people are begging for the regulators to protect them from harm.”

“While the specific concerns outlined in the Commission’s Emergency Order have been remedied, there are still legal vehicles for concerned citizens and entities to have their voices heard,” Brown said before Thursday’s vote. “The individuals and organizations who attempted to intervene in this proceeding may file their own formal complaint or intervene in an existing complaint which relates to their concerns.”

ARM, a contractor hired by the Bureau to investigate ME1, said the ground at Lisa Drive had been stabilized by Sunoco’s use of grout.

The PUC put conditions on restarting the pipeline operation including notification to the agency, as well as municipal officials and property owners of any future sink holes within 12 hours of discovery. Sunoco also has to submit “post grouting” reports to the PUC every 60 days for the next six months, and inform the agency if construction methods change.

The Department of Environmental Protection is considering new permit applications from Sunoco that would use open trench construction methods for the Mariner East 2 line, instead of horizontal directional drilling.