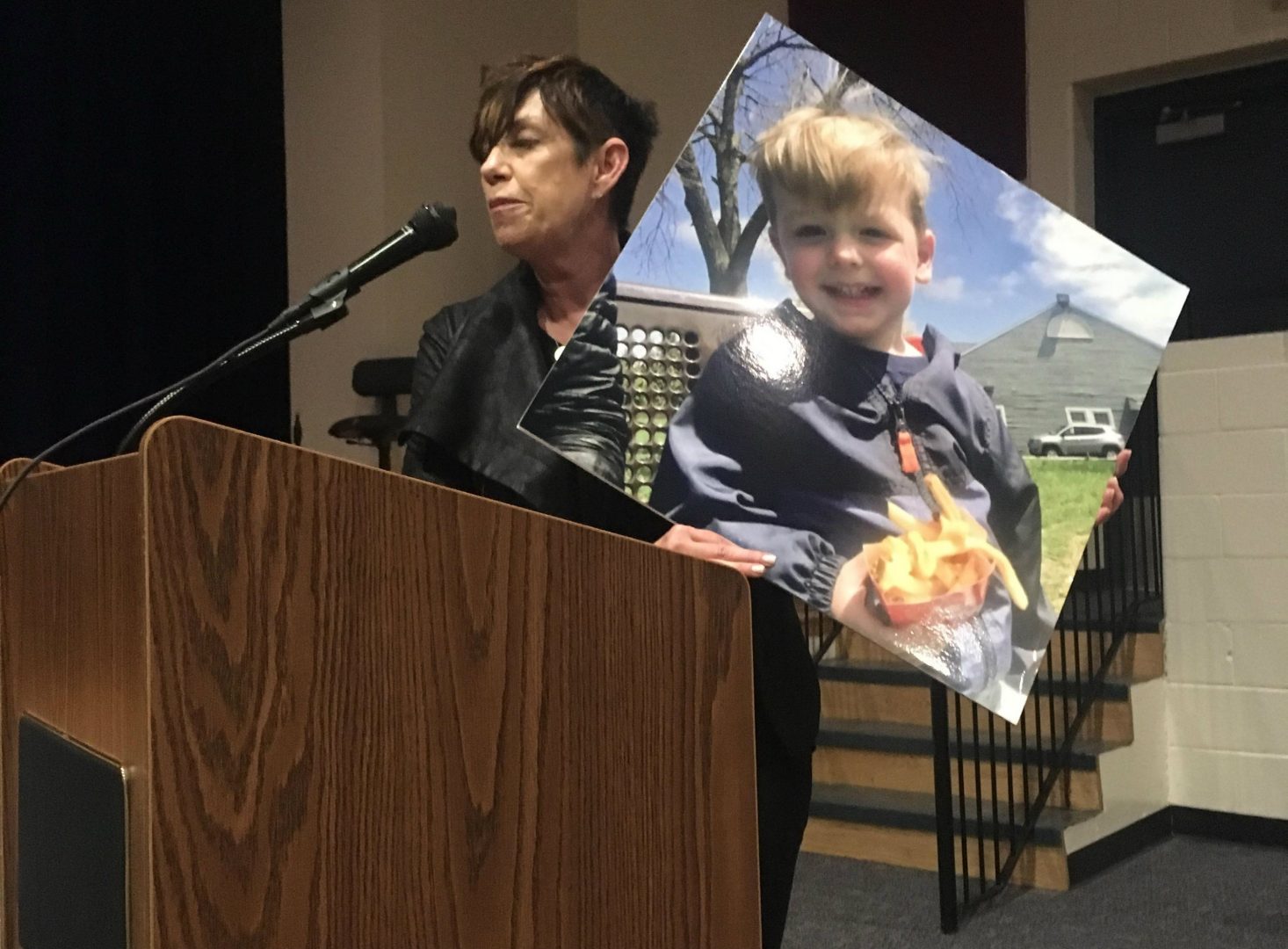 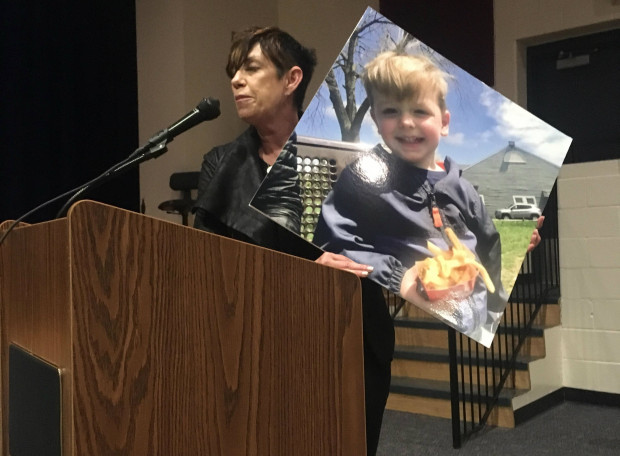 Denise McCarthy told a Department of Environmental Protection hearing that the Mariner East pipelines would endanger her grand nephew, Jack, whose picture she held up as she spoke. DEP held the public meeting to hear comment on Sunoco’s proposed permit modifications in West Whiteland Township, Chester County.

Denise McCarthy held up a large photograph of her grand nephew, Jack, at a public hearing in West Whiteland Township on Monday night, and urged state officials to stop Sunoco building its two Mariner East pipelines past the boy’s house.

Neither McCarthy nor Jack lives in the township, but that didn’t stop her telling the officials from the Department of Environmental Protection that the pipeline would risk the safety of the cherubic 20-month-old if it is built as planned 30 feet from his family’s home in nearby Aston Township.

“For Sunoco shareholders to fatten their wallets and have Jack and his family at risk just doesn’t make any sense to me,” McCarthy told an audience of about 200 people at Peirce Middle School in West Chester.

While the meeting had been called to allow the public to comment specifically on plans by Sunoco to change its construction method at two sites on East Swedesford Road and North Pottstown Pike in West Whiteland Township, many speakers used the occasion as the latest opportunity to restate their opposition to the pipelines overall.

Nearly all of the 33 speakers at the two-hour hearing argued that the natural gas liquids pipeline represents a risk to public safety as it passes through the densely populated suburbs of Chester and Delaware counties; that its permits were issued by the DEP even though deficiencies remained in Sunoco’s application; and that drilling for the project is opening up sinkholes in the fragile local geology.

Sinkholes appeared in March at a Sunoco pipeline construction site on Lisa Drive, also in West Whiteland Township, prompting the Public Utility Commission to shut down the existing Mariner East 1 line at the same location, and order an investigation of pipeline integrity. Sunoco says its investigation is complete and there is no problem with ME1, but PUC has not yet allowed operation to restart.

Sunoco said on April 25 that the PUC had asked it to expand a grouting program at the Lisa Drive site in order to stabilize the ground there.

“As a parent worried about safety, how can I accept that there is a pipeline running 36 feet from my children’s bedrooms that could leak colorless, odorless and highly explosive gases?” asked Stacey Lavelle, a West Whiteland resident.

Allowing the company to use open trench and conventional boring rather than the horizontal directional drilling that it previously planned raises new questions about whether the line will threaten public safety and environmental quality, Lavelle said.

Karst is a geological formation that contains gaps, ridges and fissures in the underlying limestone. When the PUC shut down Mariner East 1 in March, it directed Sunoco in part to study the geological conditions.

Lavelle asked the two DEP officials at the hearing to give her a “100 percent guarantee” that the requested permit changes would not result in anything “unexpected or catastrophic.”

Virginia Cain, a community relations coordinator for DEP, said officials would not respond to concerns during the meeting but will take public comments into account when deciding whether to issue the permit modifications.

Several trade unionists whose members are working on the cross-state Mariner East project urged the DEP to approve the project, saying it will be safe and will boost the local economy.

Tom Redden, business agent for Steamfitters Local 420 in Chester and Delaware Counties, whose members weld sections of the pipe, argued that pipelines are the safest way to transport natural gas liquids, and that his welders are trained to high standards that will ensure the line does not leak.

“Our guys are well equipped to weld that type of pipe,” Redden said outside the meeting.

Redden said critics’ concerns were a result of “preconceived notions” that were unlikely to be swayed by counter-arguments such as his own.

“People that came here tonight are against it, it doesn’t matter what I say, that’s not going to change anybody’s opinion,” he said.

Redden said public opposition to the pipelines is based on media coverage of events like spills of drilling fluid – which have occurred dozens of times during the project, and have resulted in multiple notices of violation being issued by the DEP. Those events, he argued, are less significant than suggested by media reports, and are responsible for fueling public concern.

“When I read about spills, I think about multiple hundreds of thousands of gallons of gas leaking, not a 55-gallon drum of clay,” he said.

“This project is in need, and it remains the safest way to transport energy resources,” Carey said.

But Gregory Kohs, whose daughter attends the middle school where the hearing was held, echoed local concerns about the explosive nature of the highly pressurized propane, ethane and butane that will be carried by Mariner East 2 and later by a second pipeline, Mariner East 2X, which is also under construction.

Kohs cited a 2014 explosion in Taiwan of a gas line that used the same open-trench construction as sought in the current permit modification, killing 32 people. Open trench is a technique in which the pipe is laid in a trench and then covered over, rather than buried in a tunnel.

“I am interested in hearing how Sunoco plans to ensure that a Taiwan incident will never happen in Chester County because based on how many mistakes have already been made by Sunoco in the construction of this pipeline, I don’t have a lot of faith in their ability to safely maintain it in the future,” he said.

Sunoco, which was not represented at the meeting, says Mariner East 2 will start operating by the end of June.

When complete, the pipeline, costing more than $2.5 billion, will carry natural gas liquids some 350 miles from the Marcellus Shale of southwest Pennsylvania to a terminal at Marcus Hook near Philadelphia where most of the fuel will be exported.

West Virginia is grappling with cost, benefit of natural gas industry. Some see a warning in state's history with coal