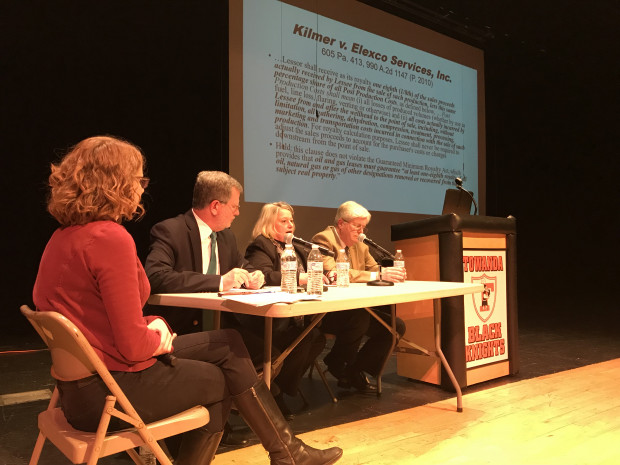 StateImpact Pennsylvania hosted an educational forum Monday in Towanda, Bradford County to examine how Pennsylvania and other major energy-producing states are dealing with disputes of oil and gas royalties.

Many Pennsylvania mineral owners have complained they are not being paid fairly. The controversy has led to class action lawsuits and ongoing litigation by the state Attorney General’s Office. Landowners have accused gas companies of abuses including charging exorbitant fees, misreporting the sale price of gas and volume produced, and failing to adhere to lease language.

Much of the issue revolves around so-called “post production costs”, which are the expenses gas companies incur when they move and process gas from wells to the market. These costs can be passed along to landowners and show up as deductions from monthly royalty checks.

Speakers during the two-hour event at Towanda Area High School included Owen L. Anderson, a professor and distinguished oil and gas scholar at the University of Texas, Jackie Root, the head of the Pennsylvania chapter of the National Association of Royalty Owners, and David Fine, an attorney with K&L Gates in Harrisburg who represented two gas companies in a state court ruling about royalties that was favorable to the industry.

Here are a few takeaways:

“Most courts have come to the conclusion that production occurs at the wellhead,” said Owen Anderson, of the University of Texas. “Anything from the wellhead beyond is a permissible deduction.” This means, for example, companies can deduct expense of transporting gas through pipelines, compressing it, and dehydrating it. When calculating a royalty, the point of sale really matters, too. So where is the sale point? Some states give more scrutiny to a companies selling gas to their own affiliates and require the royalty to be based on an arm’s-length transaction.

“Landman after landman came to the door and said, ‘You don’t have to worry about the deduction clause because it’s a 12.5 percent lease, and by state law. A lot of those people were trusting, and they lost,” said Jackie Root of NARO Pennsylvania. She is lobbying the state legislature to pass a bill ensuring people are paid a minimum royalty.

The law simply says an oil and gas lease is not valid unless the mineral owner is paid at least a one-eighth royalty. It is silent on how that royalty is to be calculated. “There are a lot of problems with that statute,” said K&L Gates attorney, David Fine. “Dick Thornburgh, who was the governor when that was enacted, is a partner in our law firm. I called Dick and I said, ‘What does [the statute] mean?’ and he said, ‘I don’t know. I don’t remember.’ And the truth is, I don’t think anybody paid that much attention to the Minimum Royalty Act in 1979.”

Anderson said that when prices drop (as they did recently with natural gas) companies, “quite honestly put their accountants to work, and they figure out ways to cut costs. One of the ways they can cut costs is with deductions.”

Advocates for mineral owners, like Root, say the law needs to be updated to protect landowners from predatory royalty practices. The industry says it would be unconstitutional for the legislature to step in and alter the terms of contracts.

FirstEnergy: If feds don't help us, more power plants will close. Trump's thinking about it