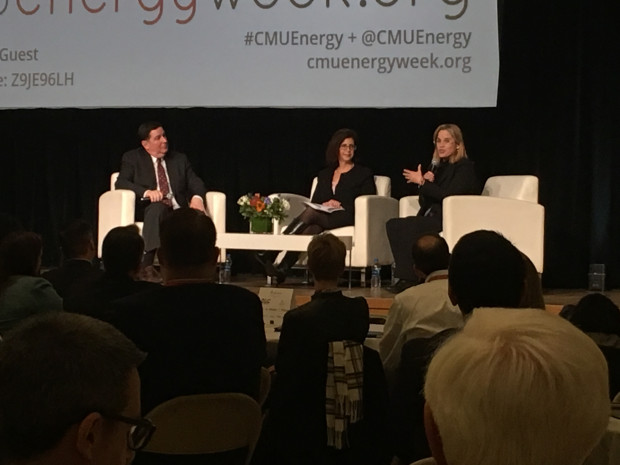 Carmen Yulín Cruz, who received a master’s degree from CMU in the 1980s, came back to the campus to speak at “Energy Week” alongside Pittsburgh’s mayor.

She said the situation in Puerto Rico is still dire for many.

“You have no idea what it is to spend months and months and months with not a flicker of light,” she said. “We don’t want energy to be able to bathe in warm water or to have air conditioning, we want it so our children can go to school. We want it so that our doctors can operate in the operating rooms without having to use the light from their cell phones.”

In rebuilding the grid, Cruz said she wants to see it modernized, and she would like the U.S. territory to move away from generating power with fossil fuels.

Cruz sees potential in microgrids, where electricity is produced and distributed locally from sources like solar panels. She said Puerto Rico has a lot of potential for solar, with 328 sunny days a year.

The island had big solar farms before the hurricane, but the storm damaged them.

“We have to look at our citizens and see how we can make it affordable so they can put solar panels that they can take out when a hurricane comes and put right back in,” she said.

But there are obstacles, she said, like an urgency to just get the power back on, along with federal laws that make it tough to rebuild the grid in ways that didn’t exist before the hurricane.

“We are piling up the island with generators,” she said. “We must use the opportunity to look at that portfolio of options and to look at other cities that have started doing that.”

One of those cities is Pittsburgh. Cruz spoke alongside Pittsburgh Mayor Bill Peduto, who said he wants to change how Pittsburgh looks at energy. He said people currently view it in “siloed” ways, from fossil fuels to tech firms to research institutions to renewable energy.

He said he wants to bring those systems together to help form energy “corridors” that do everything from producing energy within a community to using it to power electric cars.

“It would be a portfolio that you could then market to cities across the country and around the world,” he said.