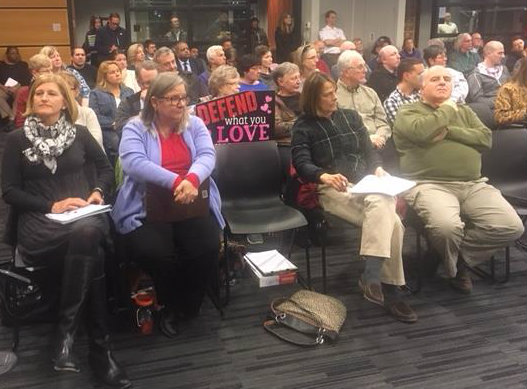 Residents of Chester County’s West Whiteland Township on Monday pressed pipeline regulators for answers on Sunoco’s Mariner East construction after it produced sink holes behind some local homes.The meeting was held at the township municipal building to address residents' concerns, in part about sinkholes that have developed near the construction sites.

Residents of Chester County’s West Whiteland Township expressed their fears and frustrations to state and federal pipeline regulators at a meeting on Monday some two weeks after sink holes opened up during construction of the controversial Mariner East pipelines in the township.

Homeowners asked whether their homes would be affected by drilling through the unstable local geology; whether there would be a catastrophic explosion if the new pipelines leak; and whether the officials were able to protect them from the pipeline company, Sunoco, that many people distrust.

Representatives of Pennsylvania’s Public Utility Commission and Department of Environmental Protection, and the federal Pipeline and Hazardous Materials Safety Administration, said the pipelines are subject to regulations governing safety and environmental quality, and said they are available to respond to public concerns.

But many of the approximately 140 attendees said they fear for their safety and the value of their homes after at least three sinkholes up to 20 feet deep appeared in the backyards of several homes on Lisa Drive, where Sunoco is drilling for the pipelines.

“I pity the people on Lisa Drive,” said Marcia Gentry, 70, who carried a sign saying “Defend What You Love – Resist Mariner East.” “They can’t move, their homes are not worth much. I’m worried my home will go the same way. Once it’s happened, you have virtually no property value, it’s over.”

Paul Metro, manager of the PUC’s safety division, said Sunoco must always comply with regulations such as the type of steel it uses for its pipe, the quality of the welds used to join sections of pipe, and the qualifications of welders.

Now, the company is being subjected to additional scrutiny of the parallel Mariner East 1 pipeline, which the PUC temporarily shut down with an emergency order on March 7. It was concerned that the sinkholes and the close-by construction of the new pipelines might compromise its ability to safely carry natural gas liquids.

Metro declined to say what the investigation is finding or when it might conclude, but said Sunoco could be required to inspect the line more often, to reroute it, or even to replace it altogether if regulators find safety has been compromised.

“We are looking at a number of tests that should tell us what’s occurring,” he said. “The order says the [PUC’s] Bureau of Investigation and Enforcement must be satisfied that this line has not been compromised.”

Whatever the results of the investigation, they will be driven by “data, not emotions,” Metro said.

Sunoco spokesman Jeff Shields has said in the past has said Mariner East 1 is safe and stable, and that the company believes the testing will back that up. On Tuesday, he said Sunoco wants to be a valued member of the communities where it does business, and looks forward to the safe completion of the Mariner East project.

Given that Sunoco or its contractors are conducting the investigation on Mariner East 1, one resident asked how regulators could be sure the company is giving them accurate information about the condition of the line. Metro replied that inspectors have the expertise to detect any inaccuracies in Sunoco’s reports.

“We can tell if the facts have been modified, we’ll know that right away,” he said.

Sunoco has predicted that the inspection of Mariner East 1 will show that the pipeline is safe, as it has been since it was built in the 1930s, and that there is no threat to the new pipelines from the local geology. The company says there were three sinkholes at Lisa Drive, and that all have been filled.

PUC official: ‘No such thing as a blast zone’

Metro played down concerns raised by several residents that the new pipelines represent a risk to public safety because of the explosive nature of the highly pressurized ethane, propane and butane that they will carry.

He said pipelines are a far safer way of carrying those materials than either truck or train, and he rejected the use of “blast zone” as a description for the area that would be affected if a pipeline explodes.

“These are not blast zones, they are buffer zones,” he said. “They have been calculated by Sunoco. There is no such thing as a blast zone.”

But he declined to say how wide such a zone might be, saying it was proprietary information that is shared only with some state officials and emergency responders. If he disclosed it, he would go to prison and lose his pension, he said.

“That’s confidential security information,” he said, to sardonic laughter from the audience.

According to a study done last year for the Middletown Coalition for Community Safety, an anti-pipeline group in Delaware County, any leak from Mariner East 2 could cause an explosion that would burn anyone up to 1,100 feet away.

“When they start hearing blast zone, that’s what causes fear, and that’s what drives me crazy because it’s just not factual,” Woods said.

Still, he acknowledged that a pipeline leak could be ignited by sources including a car, a doorbell or even a cell phone, and did not respond to a question by West Whiteland resident Ginny Kerslake on how people could respond to a leak if they could not use their cars or their phones.

“If we can’t use our cell phones and we can’t even ring a doorbell, how are we supposed to know?” she asked. “How could you possibly notify the public?”

Woods said any leak of natural gas liquids could be identified by a cold white cloud that would produce frost on the ground, and would move to low-lying areas because it is heavier than air. The material has no odor that might allow residents to detect it, and none is added because of the specifications of industrial clients, he said.

Eroded trust, and a lawsuit against Sunoco

And Woods acknowledged that Sunoco’s record of multiple violations and shutdowns during construction of the cross-state Mariner East project has eroded public trust. “Regaining trust? It’s a tough one especially between the industry and the public,” he said.

Township manager Mimi Gleason said county and local emergency responders have detailed plans to deal with any pipeline leak, and that the risks of the kind of explosion described by pipeline opponents are “tiny.” Gleason said the township has no regulations that would allow it to control pipeline construction. 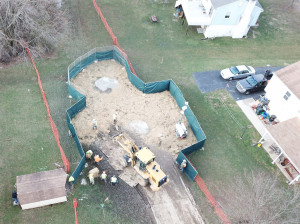 Crews work to stabilize sinkholes in a West Whiteland Township neighborhood on March 3. The sinkholes appeared recently near a construction site for the Mariner East 2 pipeline.

Mary March, a Lisa Drive resident who is suing Sunoco in response to the sink holes, asked the regulators why they had not known about a geological fault behind the street’s homes when they gave the go-ahead for drilling there.

“I’m not aware that it was at the wrong level,” he said. “The design level of that line should have been in very stable bedrock. What I was told was that it was a surprise.”

The lawsuit by March, her husband Russell March, and another local resident, accuses Sunoco of negligence for using a drilling technique that was unsuitable for the local geology; failing to recognize that a fault lay in the path of the pipeline; and failing to make adequate surveys. The suit, filed in common pleas court in Philadelphia, also includes charges of trespass, nuisance, and failing to ensure proper training of personnel.

March’s lawyer, Andrew Neuwirth, issued a statement saying that his clients’ concerns are based on Sunoco’s record during the last year of pipeline construction.

“Our clients have not exactly been reassured by two separate sets of sinkholes, a $12 million fine against Sunoco, and an order from the Pennsylvania Department of Environmental Protection that Sunoco has engaged in ‘egregious and willful violations’ of Pennsylvania law,” Neuwirth said.

After the meeting, resident Jerry McMullen said the regulators’ responses showed that they don’t have enough control over pipeline builders like Sunoco.

“It confirmed a lot of our suspicions, that the agencies of Pennsylvania say that they are powerless,” he said. “There are so many reasons why they can’t do things, that it frustrates the public. We don’t feel that we’re being supported.”