Refinery workers at Philadelphia Energy Solutions wait to hear Republican Senator Ted Cruz speak at a rally against the Renewable Fuel Standards. The company has blames the program for its financial troubles in its bankruptcy filing. 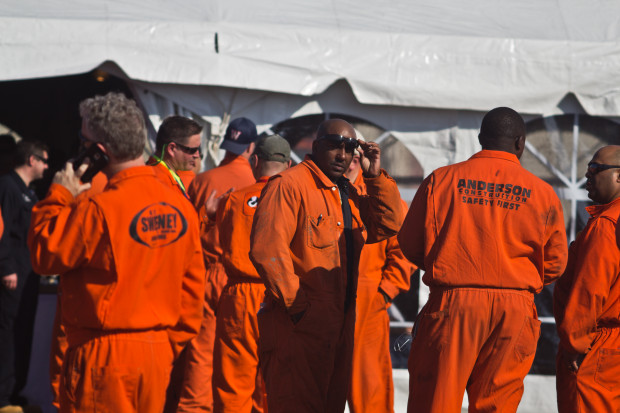 Refinery workers at Philadelphia Energy Solutions wait to hear Republican Senator Ted Cruz speak at a rally against the Renewable Fuel Standards. The company blames the program for its financial troubles in a recent bankruptcy filing.

Under a giant white tent in the parking lot of Philadelphia Energy Solutions, Texas Sen. Ted Cruz took to the podium like he was back on the presidential campaign trail Wednesday afternoon.

Speaking to hundreds of refinery workers who wore orange and blue jumpsuits, and joined by local labor leaders, Cruz railed against the federal program known as the Renewable Fuel Standard (RFS), while the workers cheered.

Philadelphia Energy Solutions filed for Chapter 11 bankruptcy last month, blaming the skyrocketing costs associated with the standard for its financial woes. Created by the Energy Policy Act of 2005, the RFS mandates gasoline contain a portion of biofuels, mostly ethanol from corn. The refinery can’t blend ethanol into its gasoline, so it must buy credits.

Cruz slammed what he called “big corn” lobbyists, saying they don’t serve the corn growers and farmers. He said PES had to pay $218 million to comply with the program in 2017, which Cruz said was more than double the refinery’s payroll.

“It doesn’t make any sense, it is nuts,” he said. Cruz supports a cap on the cost of the credits.

Worker after worker stood up and asked Cruz about President Trump’s current position on the program. Trump campaigned in favor of RFS. Cruz said he hopes Trump would support a reform, and says he encouraged both the corn and oil interests to work on a solution together.

But not everyone agrees that the refinery’s financial woes can be blamed on the RFS program. Christina Simeone, from the University of Pennsylvania’s Kleinman Center for Energy Policy, says the bankruptcy stems from decisions made by the company itself. 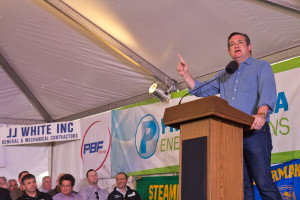 “Trying to blame all of their issues on the program is more of a political play than a substantive play,” she said. “I believe the company is being very disingenuous.”

When the refinery opened in 2012, it used rail cars to ship cheap Bakken crude oil from North Dakota. But those rail shipments aren’t so cheap anymore, in part because of new pipelines that take the crude down to the Gulf Coast. Energy Transfer Partners, one of the refinery’s own investors, built the Dakota Access line, which made the crude-by-rail shipments that PES had relied on less profitable.

Simeone says that meant the plant had to import more expensive crude.

Meanwhile, other refineries across the country, including neighboring Monroe Energy are doing well.

And a recent analysis by Reuters shows the PES investors, led by The Carlyle Group, have reaped millions despite the bankruptcy.

Supporters of the fuel standard say the cost of the program came as no surprise to PES, and that the refinery is an outlier when it comes to profitability. Renewable Fuels Association President Bob Dinneen called Cruz’s campaign “mis-directed.”

“If he truly cares about the jobs at PES, he ought to focus his angst on the investors who sacrificed their own refinery for more lucrative investments, including construction of a pipeline that diverted low-cost domestic crude oil away from East Coast refineries and forced them to import more costly crude oil from places like Saudi Arabia and Nigeria,” Dinneen said in a statement. “All Senator Cruz is really protecting is corporate greed, because that’s what’s really at the heart of PES’ financial problems.”

AFL-CIO union leader Pat Eiding says that without The Carlyle Group, the refinery would have closed in 2012.

“If you close this place it will sit as a desert for years because environmentally you can’t fix anything, unless you put a storage facility in there,” he said.

Eiding says he knows Ted Cruz is a strange bedfellow for him. But he says saving those jobs are key. He hopes Cruz will be able to convince President Trump to reform the program.

“And listen, everyone knows that Senator Cruz and I wouldn’t be in the same place all the time,”  Eiding said. “But if we feel he can get to the president, he can get in that door, it’s worthwhile.”

Penn’s Simeone says even if a bankruptcy judge agrees to wipe the RFS compliance costs off the PES balance sheet, she doesn’t think that will solve its financial problems over the long term. She says she sympathizes with the workers who could lose their jobs, but she says the unions should be open to looking at other causes of the bankruptcy.