Philadelphia explains how it would make deep cut in carbon emissions 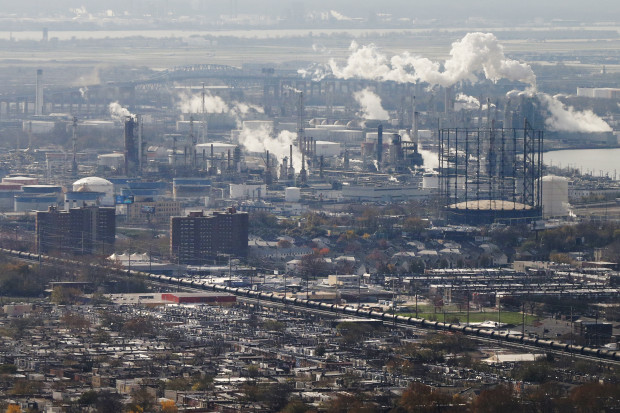 The Philadelphia Energy Solutions refinery accounts for almost 16 percent of the city's carbon footprint, according to a City report that describes how to make deep cuts in carbon emissions.

The City of Philadelphia on Tuesday unveiled its vision for how to meet its ambitious goal of cutting carbon emissions by 80 percent by 2050.

A report by the city’s Office of Sustainability identifies the sources of carbon emissions, describes how they could be cut, and provides an overview of the low- or no-carbon systems that could replace them. But even with a plan in place and strong support locally, the ability to hit Mayor Jim Kenney’s “80 by 50” target may not be entirely within Philadelphia’s control, experts warned.

To sharply lower emissions, the city will need to use a lot more energy from renewable sources, step up its energy-efficiency programs, and develop an energy system resilient to the higher temperatures and bigger storms that are expected to come with climate change, the report said.

The 55-page report emphasized the need to switch to renewable power, noting that 39 percent of Philadelphia’s carbon emissions (excluding transportation) come from fossil fuel-burning power plants. Together, they emit about 6.5 million tons of greenhouse gases, making them the biggest of five categories of carbon pollution considered by the report, by far.

“One of the key parts of powering our future is understanding that, to meet the Mayor’s 80 by 50 commitment, you really need to move to a zero-carbon emissions electricity grid by 2050,” said Rich Freeh, a senior program manager in the Office of Sustainability, at a press conference to launch the report, titled “Powering Our Future: A Clean Energy Vision for Philadelphia.”

To encourage the generation of power from renewable sources, the report urged institutions such as universities and museums to buy electricity from generators that use sources like wind or solar, and it urged Pennsylvania to strengthen its Alternative Energy Portfolio Standard, which currently requires distribution companies to buy 18 percent of their electricity from renewable sources by 2018.

For the City of Philadelphia’s own power supply, officials pointed to a request for proposal that went out to potential renewable energy suppliers in October. The City will use responses to decide how much of the power supply to the public sector can be affordably bought through a renewable energy power purchase agreement, the report said.

But it recognized that any significant shift toward renewable power generation would have to be done regionally because Philadelphia is part of PJM Interconnection, the huge regional electrical grid that coordinates wholesale electricity transmission in 13 states and the District of Columbia.

“Eliminating fossil fuel generation will require a combination of market forces and actions across all levels of government, including at the federal level,” the report said.

In a section on creating a low-carbon economy, the report said it would examine the future of Philadelphia Energy Solutions refinery on the south side of the city. Officials said it accounts for almost 16 percent of the city’s carbon footprint, and is the single-largest source of particulate emissions.

The Office of Sustainability said it is “committed to leading a citywide conversation on the role of PES and other heavy industry as we move toward a clean-energy future.”

At the federal level, the Trump administration’s rejection of climate action led Kenney to declare – on the same day that President Trump withdrew from the Paris climate accord – that Philadelphia would continue to pursue the Paris emissions goals regardless.

Trump’s action, along with his decision to scrap the federal Clean Power Plan to cut power plant emissions, helped build support among some Philadelphians for local action on emissions, said Christine Knapp, director of the Office of Sustainability.

“I certainly think the federal administration’s decision to withdraw from the Paris climate agreement and to rescind the Clean Power Plan has brought out a lot of passion from folks who want to see the country moving in a stronger clean-energy future direction, and are dismayed by the federal inaction on those fronts. So, they are looking to the city,” Knapp said.

Public comments on the report’s proposals will be sought until the end of January, and the document will be finalized after those responses are received, Knapp said. An online survey will ask Philadelphians whether the report was clear and useful to them, what steps they would like the City to take next, and whether they will take any individual actions after reading the plan.

John Quigley, a former Pennsylvania environment secretary and now a lecturer in sustainability at Harrisburg University of Science and Technology, called the program “very ambitious,” but said it was achievable given enough political will.

Some states have already shown that a shift to renewables is possible, Quigley said, citing California, which is ahead of schedule in its goal of getting 50 percent of its electricity from renewable sources by 2050, and Texas, where cheap wind power is displacing natural gas for power generation in some places.

Philadelphia’s program should be seen as a national model for cities in the absence of federal leadership, Quigley said.

But given the plan’s heavy dependence on decarbonizing the power sector, its overall success will depend on cooperation with utilities and grid operators throughout the PJM region, he said.

“Some of the decisions are going to be out of Philadelphia’s hands,” Quigley said.

For now, the plan is focusing on how Philadelphia’s residents, businesses and institutions can help to drive down emissions, following the City’s earlier initiative to seek renewable sources of power for its own uses, said Knapp.

“This report is about how everyone else in the city – residents, businesses, institutions, other legislative bodies at the state and federal level, what they can do to also help us meet that 80 by 50 goal,” she said.