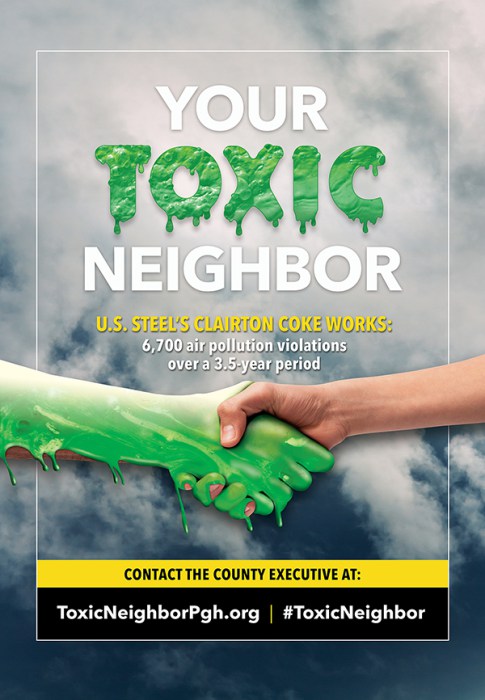 A Pennsylvania environmental group is launching an ad campaign against two large industrial facilities near Pittsburgh.

PennFuture is kicking off its “Your Toxic Neighbor” campaign, which will include bus shelter posters throughout Allegheny County, targeting U.S. Steel’s Clairton Coke Works and Shell’s yet-to-be-built ethane cracker in Beaver County.

In addition, it has created two websites that direct users to send letters and petitions to local officials urging stricter oversight of both the Shell and Clairton  facilities.

The Clairton Coke Works is the largest source of particle pollution, carbon monoxide, and benzene in Allegheny County, according to data from the Pennsylvania Department of Environmental Protection. The Allegheny County Health Department determined the plant violated the terms of its air permits 6,700 times over a 3 ½ year period.

Shell is slated to begin construction at its ethane cracker in the next few months. When it’s built and operating, it will become one of the state’s largest sources of volatile organic compound pollution, a key component of ground level ozone, or smog.

“In both cases, we’re dealing with major pollution sources,” says Larry Schweiger, PennFuture’s President and CEO. “In the case of the cracker plant, it’s clear to us, policymakers were not fulfilling their trustee obligations and have moved beyond any consideration of citizen concerns.”

Schweiger says the campaign’s budget was yet undetermined. (PennFuture is funded by private donors and foundations, including The Heinz Endowments, which helps fund The Allegheny Front.)

Clairton’s pollution is the subject of a lawsuit from local residents, who claim that it’s making them sick. U.S. Steel did not immediately respond to a request for comment.

Shell recently agreed to a settlement with environmental groups to conduct fenceline monitoring of air emissions at the plant, which can quickly detect elevated leaks, and place more stringent requirements on flaring, in order to burn off pollutants.

It received $1.6 billion in state tax credits, and will bring thousands of construction jobs to western Pennsylvania and 600 permanent ones once it’s built along the Ohio River in Beaver County. The plant will produce 1.6 million tons of plastic a year out of the region’s natural gas.

Schweiger says his group is trying to make people downwind of the plant aware of the pollution it will create, even with its state-issued air quality permits.

“It represents a new very large source of pollution. It will also trigger other developments which will add to the burden,” Schweiger says. “It ends up shifting the region from a place people want to come and live to a place where air quality prevents new enterprises, like Amazon and others from wanting to come to this area.”

Shell spokesman Michael Marr said in an email the company has worked with the state to make sure its impact on air quality in the region would be minimal. It acquired emissions reductions credits from other industrial plants that have closed down as a requirement of its air quality permit with DEP.

“Our site will utilize the best available technology to control emissions along with fenceline monitoring, with that data available to the public.”

DEP spokesman Neil Shader said: “DEP will enforce all applicable laws and regulations regarding clean air and clean water to the fullest extent of the department’s authority.”