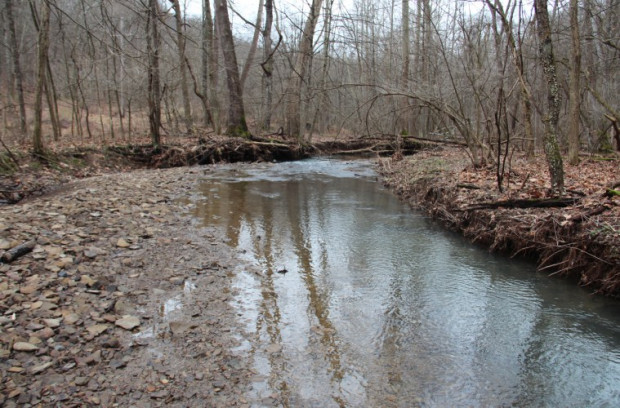 A month after a panel of judges said Consol Energy’s mining plan would “essentially destroy” a Western Pennsylvania stream, the company has sent in a new plan. But it’s halted its longwall mining operations in the area and laid off workers while waiting for the state to decide on the proposal.

Consol says 303 miners at its Bailey Mine have been “impacted” by the work stoppage.

The company submitted a revised permit application to mine beneath Polen Run, a trout-stocked stream that runs through Ryerson Station State Park in Greene County. The Pennsylvania Department of Environmental Protection (DEP) is reviewing the application.

The revised application came in response to a state Environmental Hearing Board (EHB) rejection of a separate permit that allowed Consol to mine in another stretch of Polen Run.

The major difference in the two plans is what the company says it will do in a worst-case scenario: if mining causes subsidence to the stream bed and leads to a loss of stream flow.

Under the old plan, the company said it would essentially re-build any impaired sections of the stream. In the new plan, the company is proposing to use a spray-on material to seal any cracks created by the mining.

Consol spokesman Brian Aiello said in an emailed statement the company thinks the new plan “meets the necessary criteria and complies with the spirit of the recent EHB decision.” Aiello said the company thinks “there is a less than 1 percent chance” that its mining will damage the stream bed, but just in case, it said its plan “includes a minimally-invasive, localized sealant technology for any potential mitigation work.”

The company sent its revised permit to the DEP Aug. 25. The company halted its longwall operation short of Polen Run Sept. 1, Aiello said. “This is the first time in the 35-year history of the Bailey Complex that the company has failed to receive a needed permit in a timely manner,” he said.

“Because we’re dealing with a longwall mine underneath a state park, there’s an additional level of scrutiny and analysis that the DEP is required to do,” Quigley said. “DEP has to do a tremendous amount of due diligence on any permit of this nature, and their challenge is compounded by fact that agency is very severely understaffed.”

The agency has lost about 700 staffers, or 22 percent of its workforce, over the last decade.

The Center for Coalfield Justice and Sierra Club, two environmental groups that have appealed Consol’s past DEP permits in the area, declined comment.

The company changed its plans because of an August 15 ruling by the state’s Environmental Hearing Board. In that decision, the five-judge panel ruled the DEP’s permit allowing the company to repair damage to Polen Run in the Bailey Mine’s 1L and 2L panels by reconstructing the stream was “in violation of” state laws.

The judges noted that other Consol mining operations in the area had resulted in damage to nearby streams, including a loss of flow as a result of subsidence. For instance, a DEP inspector “observed heaving and fracturing in the streambed” of four streams, including Polen and Kent Runs, and two unnamed tributaries, after Consol undermined them.

Consol’s proposed fix for any future damage to Polen Run was to grout cracks in the underlying rock with cement. If that didn’t work, it proposed rebuilding the stream. That would require removing trees, and digging into the streambed, and laying down a geosynthetic clay liner.

The judges said DEP’s decision to allow this plan was “unreasonable.”

“When the Department anticipates that the impacts from longwall mining are going to be so extensive that the only way to “fix” the anticipated damage to the stream is to essentially destroy the existing stream channel and streambanks and rebuild it from scratch, the Department’s decision [to grant Consol its permit] is unreasonable and contrary to the law,” the judges wrote.

After that decision, Consol revised its plans to mine another section of Polen Run, in what it calls the 4L and 5L panels. Currently, the Consol longwall operation is in the 4L section, Aiello said.

The company’s new proposal is to use “the application of a polyurethane/polyuria spray material” on the streambed if “conventional mitigation techniques” failed, said Lauren Fraley, a DEP spokeswoman, in an email.

According to technical data sheets submitted to the DEP, the material is used “to coat metal tanks, pipelines, and cement containers,” Fraley said.

According to a company filing with DEP, the material is “an ‘eco-friendly synthetic application’” certified for use in drinking water systems.

Consol’s Aiello said the company is “in communication with Governor Wolf’s office as DEP continues their technical review. We are hopeful that there will soon be a resolution to this delay so we can get our miners back to work.”

J.J. Abbott, a Wolf spokesman, said in an email that the DEP has the authority to approve mining permits, “and the Governor’s Office supports the agencies decisions. Many advocacy groups and companies contact our office regarding issues before agencies, we respect DEP’s authority and obligation to make these decisions based solely on their evaluation of permits against existing standards.”

This is the latest in a string of clashes over Consol’s plans to expand the Bailey Mine, part of the largest producing underground mine complex in North America. In January, Environmental Hearing Board Judge Steven C. Beckman ordered a halt to mining underneath another nearby stream, Kent Run, after the environmental groups appealed yet another permit in the Bailey Mine’s 3L panel. 200 miners were laid off.

In July, over the protests of environmental groups, Gov. Wolf allowed a bill designed to make it easier for companies like Consol to mine beneath streams to become law. That law, inspired by the Polen Run case, allowed longwall coal mining to cause subsidence and loss of water flow to streams as long as the damage is not predicted to be permanent and the DEP approves the company’s plan to restore the stream. That law has yet to come into play for Consol’s Bailey mine, as the EHB ruled it still requires federal approval.