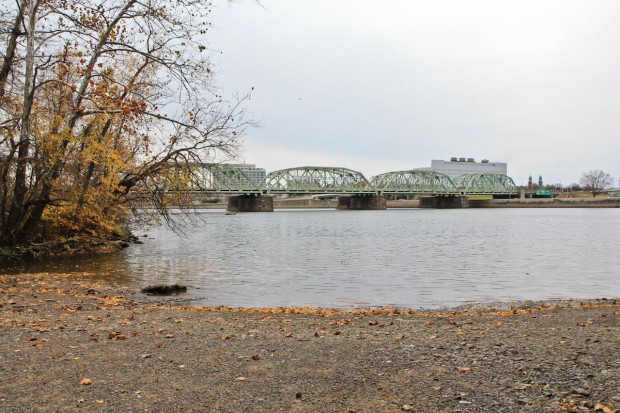 Cheers erupted at the Delaware River Basin Commission meeting Wednesday on the campus of Bucks County Community College in Newtown after commissioners from three states including Pennsylvania, New York and Delaware, approved a resolution that could lead to a fracking ban in the Delaware River watershed. New Jersey abstained and the federal representative from the Army Corps of Engineers voted no, which elicited a round of boos.

The Delaware River Basin Commission regulates water quality and quantity for the river and its tributaries, which provide drinking water for about 15 million people in New York, New Jersey, Pennsylvania and Delaware. The governors of each state, who send delegates to the meetings, serve as commissioners while the federal government is represented by the Army Corps of Engineers, which answers directly to the White House through the Council on Environmental Quality.

The 3-1-1 vote passing the resolution starts a rule making process that could last into 2018. Staff members have until Nov. 30 to come up with a proposal, which will then be subject to public comment and hearings. In essence, the rules would apply to any gas operations that utilize fracking in Wayne and Pike counties, the only part of Pennsylvania’s Marcellus Shale region that drains into the Delaware river.

Industry immediately criticized the move. API, a lobbying group that represents all sectors of the oil and gas industry, said the vote ignores the economic benefits of gas drilling and interferes with states rights.

“Common sense regulations must strike an appropriate balance between deferring to state jurisdictions and ensuring protection of the Delaware River Basin and its communities,” said API-PA executive director Stephanie Catarino Wissman in a statement. “We oppose the Delaware River Basin Commission’s proposal to adopt regulations that are duplicative and contradict existing state regulations in surrounding states and Pennsylvania, where state officials and communities have worked hard to create a robust regulatory regime that ensures the environment, public health and local communities are well-protected.”

Pennsylvania of course allows shale gas drilling in the rest of the state. Gov. Wolf’s representative voted in favor of the resolution to consider a fracking ban but made no statement. Former Republican Governor Tom Corbett had been critical of the DRBC’s drilling moratorium. But Wolf had made a campaign promise to support a ban on shale gas drilling along the Delaware.

While Obama was president, it was unclear where the federal government stood on fracking in the watershed. But President Trump is pushing for further fossil fuel development and a spokesman released a statement on Wednesday expressing disappointment with the DRBC’s decision.

“The President is committed to ushering in a new era of American energy dominance that will create more jobs, higher wages, and lower energy prices. The Administration is disappointed with the Delaware River Basin Commission’s resolution to move forward with proposed regulations to ban hydraulic fracturing. Hydraulic fracturing is a demonstrated technology that has been safely used nationwide, and to see its economic and employment related benefits, look no further than Pennsylvania – the state is now the second-largest natural gas producer in the country, and has created thousands of jobs. It is our hope that the DRBC will change course and support energy security, economic growth, and job creation,” said a White House spokesman.

While industry attacked the language of the resolution as a clear intent to ban fracking, environmentalists attending the meeting were wary of the resolution, saying it should have had stronger wording that explicitly banned fracking as well as wastewater transport, treatment, storage and disposal. 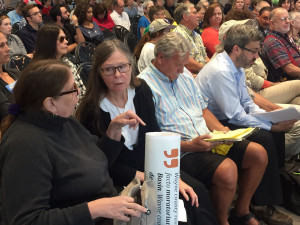 Tracy Carluccio (C) from the Delaware Riverkeeper Network attends the DRBC meeting in Newtown on Wednesday.

Tracy Carluccio is deputy director of the Delaware Riverkeeper Network. Carluccio says the resolution’s language calling for “prohibitions related to the production of natural gas utilizing horizontal drilling and hydraulic fracturing within the Basin,” is too vague. And she worries that commissioners will allow fracking wastewater to end up in the river.

“You could drive a drilling rig through the words that are in the prohibition portion of the resolution,” she said. “And then the other two portions are actually instructing the staff to develop regulations that could allow fracking wastewater to be dumped into the Delaware River.”

But DRBC spokesman Clarke Rupert says it’s too early for a critique. Rupert says the regulations have not even been written yet.

“So we just ask the public to be patient,” he said. “I know there’s a lot of anxiety and anxiousness to see what’s going to be in these revised draft regulations. The honest and truthful answer is we don’t know yet.”

DRBC staff has until the end of November to draft the rules. There will be a public comment period and public hearings on the proposal. It’s likely the commissioners will not vote on any new regulations until 2018.