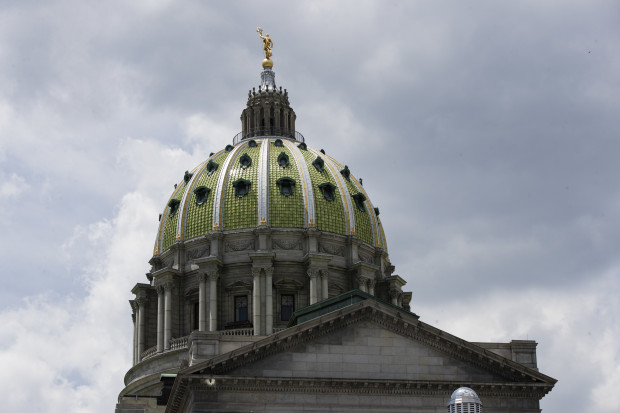 A House committee has approved changing the name of the "impact fee" paid by gas drillers.

What’s in a name?

A lot, apparently, when it comes to Pennsylvania’s natural gas industry.

A state House committee voted along party lines Monday, to rebrand the impact fee levied on the state’s Marcellus Shale drillers, calling it a severance tax instead.

The two terms hardly seem interchangable: Impact fees are levied on a per-well basis, so each time drillers punch a hole in the ground, they pay. A “severance tax” is applied when resources are severed from the earth, so it would be a tax on the amount of gas produced.

“This conversation needs to begin with the clear recognition there is a significant burden placed on that industry,” Maher says. “This would rechristen the ‘impact fee’ as a ‘severance tax.'”

The name change is viewed as a parliamentary maneuver by the GOP-led Environmental Resources and Energy Committee, which Maher chairs. The amendment aims to block a discharge resolution filed by Democrats that could have forced a vote on a 3.5 percent severance tax bill.

“The rules are very clear, unless the bill has come out of the committee, the discharge resolution would still be order,” he says. “The committee did not report the bill out. They only made an amendment to it.”

He says Republican House Speaker Mike Turzai could restart the clock, by referring the bill to another committee.

“I think there’s enough bipartisan support for a severance tax, nothing is certain,” says Patton.

Passing the tax is a top priority for Governor Tom Wolf, a Democrat.

In July, the Republican-led state Senate approved a separate plan to raise about $100 million with a severance tax.

Debate has raged in Harrisburg for nearly a decade over whether the industry is paying its fair share. The stakes remain high this year, as Pennsylvania faces a $2.2 billion budget hole.

Among the 7,450 wells in state aged four years or older, about a quarter were not charged an impact fee at all– either because they’d been plugged or produced so little gas they were exempt.

The state’s Independent Fiscal Office tracks the impact fee collections and calculates an annual effective tax rate on the gas industry. It has ranged from a high of 5.6 percent in 2011, to a low of 2.3 percent in 2014.

Rep. Leanne Krueger-Braneky (D- Delaware) is among the Democrats pushing for a severance tax, and voted against Maher’s amendment.

“In the face of a $2.2 billion structural deficit, the chairman decided to take us through a rebranding exercise,” she says. “You can’t close a deficit with rebranding.”

Note: This story has been updated with reaction from the House Democratic Caucus