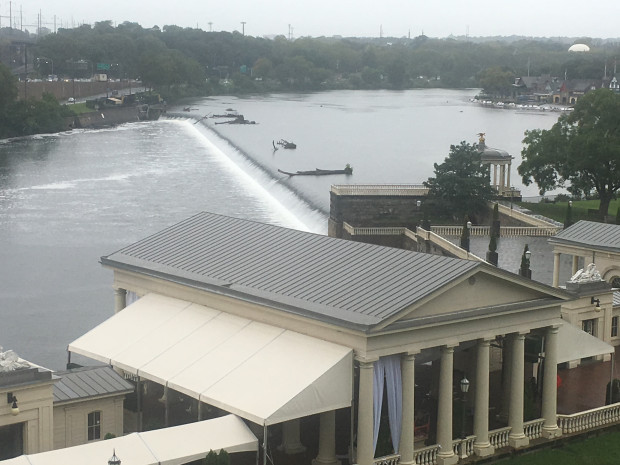 The Schuylkill River with the Fairmount Waterworks in the foreground. A new report says proposed EPA cuts will hurt water quality in the Delaware River Basin.

Water quality in the Delaware River Basin would be impaired if the Trump administration’s proposed deep cuts in the U.S. Environmental Protection Agency’s budget become law, according to a report released on Tuesday.

The report from the environmental group PennEnvironment said the EPA has played a critical role in the Delaware River’s improved health in recent decades, but that progress would be imperiled if the agency is unable to continue its work in cleaning up pollution, enforcing environmental laws, and working with state and local agencies to maintain water quality.

Water-related programs run directly by the EPA would be cut by 34 percent in the coming fiscal year, under the plan unveiled by the administration in March. Many federal grants to state governments would be reduced by around a third, and funding for research and development would be cut by almost half as part of an overall 31 percent cut to the agency’s budget.

The four Delaware Basin states – Pennsylvania, New Jersey, New York and Delaware – would lose some $14 million in grants for the control of pollution from “non-point” sources such as agricultural runoff, and about $3.3 million in funding for the protection of drinking water sources, the report estimated. 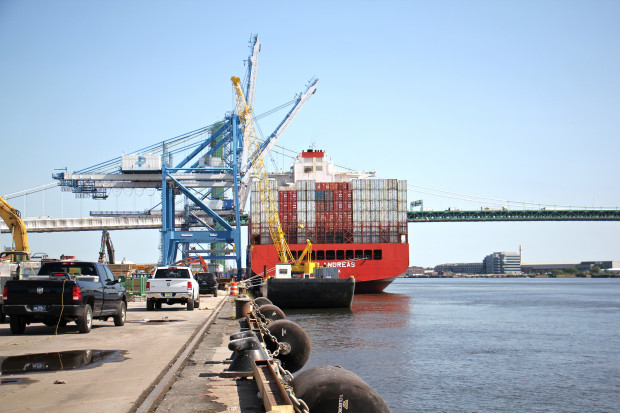 The Packer Avenue Marine Terminal on the Delaware River in Philadelphia.

Even if Congress scales back the cuts, they would still have “profound negative impacts” on the EPA’s ability to curb pollution from sources such as factories, sewage treatment plants, and farms, the report said.

As Congress prepares to debate the cuts, the 20-page document was launched at a news conference by state and city lawmakers plus local officials and nonprofits at a site overlooking the Schuylkill River, part of the Delaware Basin near Philadelphia.

Congressman Dwight Evans, a Philadelphia Democrat, said he is opposing the cuts because of the importance of clean water to the region.

“Water is not something that is Democratic-Republican or liberal-conservative,” Evans said. “It is extremely important to our wellbeing. I’m here to send a message to the Trump administration in fighting against the spending reductions in the EPA.”

He said water quality would be affected in the City of Philadelphia if the cuts become law, and he argued that other agencies such as the Pennsylvania Department of Environmental Protection do not have the capacity to compensate for the loss of EPA services.

“It would be shifting the burden on the local governments, and I don’t think that can happen,” Evans said. “Though the President has proposed this, that’s not strictly the way it’s going to happen. We in Congress have an obligation to deal with this, and we will fight against these cuts.”

U.S. Rep. Patrick Meehan, a Republican who represents parts of Philadelphia’s western and northern suburbs, has expressed “significant concern” about the EPA cuts and other aspects of the President’s budget, said his spokesman, John Elizandro.

Another Republican Congressman, Ryan Costello of Pennsylvania’s Sixth District, has stated his opposition to the proposed budget cuts to environmental protection and other areas. In March, Rep. Costello said the EPA cuts were “unacceptable”.

EPA’s Philadelphia-based region 3 also did not respond to a request for comment on the report. But the head of the union that represents the region’s EPA workers said the cuts would mean some work currently done by EPA would simply end because states don’t have funds to take it over. “If we can’t give them the money, states don’t have the money to do it themselves” said Gary Morton, president of the American Federation of Government Employees, Local 3631.

Among the agencies that could be hit by the proposed funding cut is the Delaware River Basin Commission, which regulates water supply and quality on behalf of the four basin states. The DRBC’s former executive director, Carol Collier, said it has already been forced to cut staff and may now have to make further reductions.

“Without the EPA grants, they will not be able to do the monitoring that’s necessary,” she said.

The loss of funding would mean a decline in water quality rather than just a halt to recent improvements, Collier said. New development in the Upper Delaware, for instance, could result in more pollutants entering the river unchecked if there are no inspectors to monitor them.

“There’s lots of additional impacts that may occur without the federal funding that in turn supports not only the EPA doing work but states doing work, and DRBC doing work,” said Collier, who is now Senior Advisor for Watershed Policy and Management at the Academy of Natural Sciences of Drexel University.

Kate Schmidt, a spokeswoman for DRBC, said it receives EPA funding for a water pollution control program, and works “very closely” with staff from two EPA regions, but it’s not yet clear how the proposed cuts would affect it.

The report, titled “Rough Waters Ahead,” said the Delaware River was heavily polluted during the 1950s but has become more fishable, swimmable, and drinkable in recent decades because of the efforts of EPA, state and local agencies, and environmental nonprofits.

For example, pollution by the cancer-causing chemicals PCBs in the river dropped 71 percent from 2005 to 2013 because of efforts by EPA and state agencies, while a 500,000-ton pile of the highly toxic dioxin near Wilmington, DE was remediated by DuPont after an agreement with EPA and environmental officials in Delaware.

Continued improvements would be slowed or halted if the EPA cuts are implemented, the report said.

“America can’t go back to the bad old days,” it said. “We need a strong EPA with sufficient resources to support local cleanup efforts.”

“The DEP is aware of the threats to water quality, both in the Delaware River basin and across the Commonwealth, that would result from the proposed cuts to the EPA,” Shader said.

McDonnell wrote to Pruitt in March saying the potential 30 percent cut in federal funding for DEP to comply with federal environmental laws would have “an immediate and devastating effect” on Pennsylvania’s ability to protect air and water quality.

In Philadelphia, the city’s water utility, Philadelphia Water Department, said the EPA plays a critical role in ensuring water quality in the city through regulatory enforcement, environmental restoration, public health research and education. PWD said in a statement that the federal agency needs to work closely with local utilities and environmental officials to maintain water quality, and that the relationship “will no doubt be challenging due to potential declines in federal funding.”

This story has been updated with comments from U.S. Rep. Ryan Costello, and with Carol Collier’s current title.