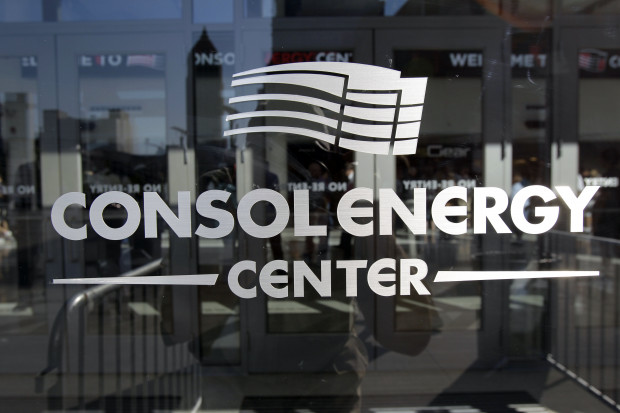 In this Wednesday, Aug. 18, 2010, file photo, the new CONSOL Energy Center is reflected in Pittsburgh.The company wants to expand a long wall mine beneath Ryerson State Park in Greene County.

Governor Tom Wolf is weighing a bill that would make it easier for an energy company to obtain permits for the controversial process of long-wall coal mining beneath a state park in southwest Pennsylvania but which opponents say could damage streams in the area.

Senate Bill 624 landed on Wolf’s desk on Tuesday after being approved handily in both houses of the Republican-controlled legislature, amid protests by environmentalists and sympathetic lawmakers who say the measure is an attempt to block a court challenge currently before the Environmental Hearing Board (EHB).

At issue is a plan by Consol Energy to expand a long-wall mine beneath Ryerson Station State Park in Greene County. The Department of Environmental Protection had issued a permit for the project, which was then challenged by environmentalists.

Wolf has ten days to sign the bill, veto it, or take no action, in which case the bill would automatically become law. Wolf’s spokesman, J.J. Abbott, declined to say how the Governor would act on the bill.

The bill says that if the Department of Environmental Protection issues a permit for underground mining, that action would not automatically presume the mine would damage streams. Permits are typically issued as a way to allow for, while mitigating, pollution. But in this bill, the permit would make the assumption that the coal mining would not cause permanent damage to the waterways.

The bill’s supporters, led by Republican Senator Joe Scarnati, say it would make it easier to develop mines and create jobs, while requiring energy companies to restore any streams that are diverted or run dry during construction of a mine.

“It would ensure that if there is a temporary stoppage of a stream, any company that is doing development that has to go under a stream has the responsibility to restore it, at the very least, to its condition prior to development,” said Drew Crompton, Scarnati’s chief of staff.

Two environmental groups, the Center for Coalfield Justice and the Sierra Club, challenged a DEP permit for the project to the EHB, arguing that mining beneath the streams could potentially damage the waterways by causing subsidence and allowing the streams to flow into cracks opened up by the mine operation. The DEP permit would have allowed the company to fix any damage to the stream by either pouring cement in the cracks or re-building the stream entirely.

Consol argued in a related case that planned subsidence was allowed under the state’s Mine Subsidence Law. In a brief, the company said that preventing it from mining within 100 feet of Kent Run in Ryerson State Park would cause it to lose $15.3 million, as it would have to leave 360,000 tons of coal in the ground.

Crompton attacked arguments by the Pennsylvania Sierra Club that a permit may not be issued under the state’s Clean Streams Act if any stream is damaged, even temporarily.

“[The Sierra Club] understands that if they can get a prohibition from turning off the stream, that it would radically impact the ability to develop long-wall mining and other mining developments,” Crompton said. “They think it would limit development, and they’re probably right.”

Opponents argue that any bill that addresses a specific company or location is unconstitutional. They also accuse Scarnati and his allies of trying to use legislation to interfere with the case in which the Sierra Club and the Center for Coalfield Justice are challenging the DEP’s issuance of permits before the Environmental Hearing Board.

“It’s bad public policy to allow for one company that’s the subject of litigation to come in at the 11th hour just before the court is about to decide the case and change the law,” said Joanne Kilgour, director of the Pennsylvania Sierra Club. “It’s really the equivalent of saying that public-interest groups and the general public have the right to avail themselves of the judicial system but only until it upsets companies so that they can come in and convince legislators to change the law.”

Kilgour said the EHB was expected to rule on the case in the spring after hearing oral arguments almost a year ago. But a decision was deferred after the judge asked for additional briefing on whether the case will be affected by the Pennsylvania Supreme Court’s recent landmark ruling that gives additional weight to the Environmental Rights Amendment of the state Constitution.

If the bill becomes law, it will be up to the EHB to interpret what effect the new law has on the litigation, but a veto would allow the case to continue, Kilgour said.

Wolf cited the Supreme Court ruling in his recent decision to veto a bill that would have stopped towns and cities from curbing the use of plastic shopping bags, and he may do the same with the long-wall mining bill, Kilgour said.

“He has clearly set out that he’s thinking about how the Environmental Rights Amendment in its new strengthened form relates to his ability to sign his name to legislation,” Kilgour said. “SB 624 is clearly a violation of not only the amendment but likely other constitutional provisions, and for that reason our hope is that he will use that same justification on this bill.”

Crompton argued the bill does not violate the new interpretation of the Environmental Rights Amendment because it requires operators to fully restore any stream that is damaged during mine construction.

“The ruling has very little to do with the facts that are at hand here. I don’t think even the Supreme Court is envisioning a way to block economic development,” he said.

Crompton also rejected arguments that the bill violates the constitution by focusing on one company in one location. “It will apply every time long-wall mining crosses a stream or goes underneath a stream,” he said.

Rep. Greg Vitali, a Delaware County Democrat, urged Wolf to veto the bill, saying that it would reduce protections for streams in Ryerson Station State Park and beyond.

“The bill would reduce protections afforded to other streams where coal companies seek to conduct long-wall mining operations underneath them,” he said.

Reid Frazier contributed to this report.