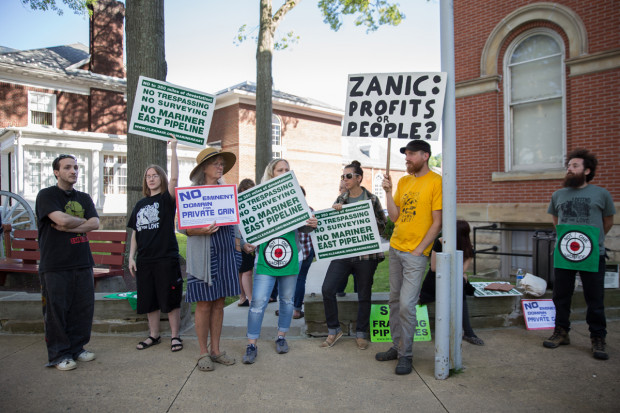 A landmark ruling by the Pennsylvania Supreme Court means that state agencies and judges will have to pay more attention to the public’s right to clean air and water when making permit decisions and issuing court rulings. At the same time, officials will have to stop using oil and gas lease revenues to fund day-to-day operations, analysts said.

The court’s historic decision last week on an appeal by an environmental group elevates the Environmental Rights Amendment to the state constitution to a status equal to other constitutional rights, and directs the Commonwealth to act as a “trustee” of the state’s natural resources, rather than an owner.

That may mean that the Department of Environmental Protection, and other regulators, will take a closer look at permit applications for controversial projects like the Mariner East 2 pipeline to make sure they would not violate the Amendment, and it provides more legal ammunition for people who are challenging permit decisions in court, according to environmental lawyers and a former DEP Secretary.

In what may be the first legal test of the ruling, a judge in Huntingdon County on Tuesday deferred a decision on a hotly contested pipeline case in order to consider the Supreme Court’s new standard.

Judge George Zanic of the Huntingdon County Court of Common Pleas said he needed 48 hours to read the ruling before deciding whether to allow local law enforcement to support Sunoco Logistics in its construction of the Mariner East 2 pipeline on a parcel of private land.

Huntingdon, Pa. landowners Ellen and Stephen Gerhart have refused permission to build the pipeline on their land. Their supporters are blocking construction by sitting in trees along the pipeline’s path.

The Gerharts’ attorney, Rich Raiders, said the judge would previously have referred the current dispute to environmental regulators, but since last week’s Supreme Court ruling the judge is required to make his own decision.

“Before last week, the judge would have said ‘oh, that’s a permitting matter, you just go through the agency,’” Raiders said. “Now the judge has to make the decision for himself.”

Complicating the issue in Huntingdon County is the protection of the endangered Indiana bat. Federal rules prohibit the removal of trees between April 1 and November 15. To do that, Raiders told the court that Sunoco would need permission from the U.S. Fish and Wildlife Service. The FWS worked out a strategy to avoid harming bats with Sunoco, and agreed on a plan in September 2016. The agency does not issue actual permits unless there is no way to avoid injuring or killing an endangered species.

Sunoco’s attorney, Alan Boynton, called the Supreme Court’s ruling a “red herring” in the Huntingdon case and argued that the decision to cut trees is “an issue between us and the federal authorities,” a reference to the FWS.

Raiders disputed that argument outside the courthouse. “Before last Tuesday that was valid,” he told StateImpact. “Now it’s not.”

A spokeswoman for the Fish and Wildlife Service says the agency “made a recommendation to Sunoco to avoid cutting trees for the pipeline project from April 1 to November 15.”
“…It is at the company’s discretion to take the risk of possibly harming bats during this period when they are more likely to be present,” said Fish and Wildlife spokeswoman Terri Edwards in an email. “If tree cutting results in injury or death of Indiana bats, Sunoco would be in violation of the [Endangered Species Act] and would face potential penalties under the law.” 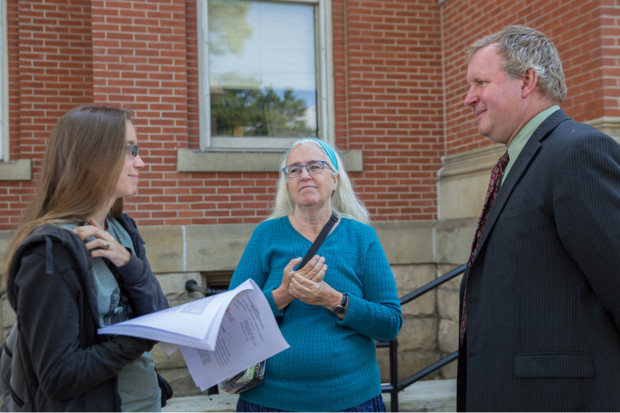 Ellen Gerhart (center) waits outside the Huntingdon County Courthouse with daughter Elise and attorney Rich Raiders. A judge will decide whether or not to grant an injunction that could lead to the arrest of the Gerharts and their supporters.

Legal experts said the ruling is the court’s clearest sign yet that the Amendment must be a guiding principle for state policy on the management of natural resources, including oil and gas.

“It’s very powerful in that it’s really saying that the words of that constitutional amendment mean what they say, and the state has an obligation to, as a trustee, uphold the meaning of that constitutional amendment for the people of Pennsylvania,” said Steven Miano, head of the environmental practice group at the Philadelphia firm of Hangley Aronchick Segal Pudlin and Schiller, and a former chair of the American Bar Association’s section of Environment Energy and Resources. 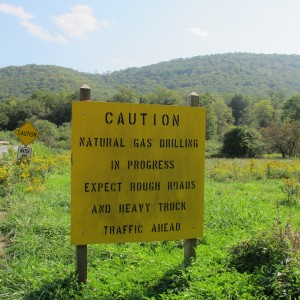 A sign posted in Susquehannock state forest. The Supreme Court ruled that funds from drilling on state land has to be used directly on environmental conservation and preservation.

Miano predicted the ruling will encourage legal challenges to state energy policy to include the Amendment as well as statutes on air or water that are commonly used to fight environmental cases. He said the challenges will now be harder for the state to defend.

The 4-2 ruling is a clearer endorsement of the environmental rights amendment than in the court’s landmark 2013 Robinson Township ruling, which was also based in part on the amendment but was less emphatic because it was based only on a plurality of the judges, Miano said.

But Jessica Sharrow Thompson, an environmental attorney with Eckert Seamans in Pittsburgh who represents the energy industry, argued that the court’s endorsement of the ERA won’t unleash a flood of lawsuits against the state. Although the court ruled that the previous legal standard for testing any violation of the Amendment was unconstitutional, it did not say what a new standard would be, and that would limit any new challenges, she said.

“I don’t think that all of a sudden, every single decision is going to challenged under the Environmental Rights Amendment because there’s still going to be a high bar to show that the ERA hasn’t been complied with,” Sharrow Thompson said.

She argued that litigants have no greater legal ammunition than they had before the ruling, and that it’s still unclear how the Amendment applies to permitting decisions.

John Quigley, former DEP Secretary, called the ruling a “really big deal” that will force the DEP to use the Amendment as the “primary lens” through which the agency must look at any permit application.

“It opens up the questioning of DEP permits on the basis of the Environmental Rights Amendment,” said Quigley, who was fired by Gov. Wolf in May 2016. “This decision could fundamentally change the way that DEP does business, and the way that citizens engage DEP, how they enforce their rights.”

Neil Shader, a spokesman for the DEP, said the department’s lawyers are reviewing the decision.

The ruling may also affect other levels of government such as municipalities which have not previously considered the Amendment in their zoning decisions but now must do so, argued Alex Bomstein, a Clean Air Council attorney who has accused the DEP of issuing permits for Mariner East 2 while deficiencies remained in Sunoco’s applications.

And it will clearly force state agencies to take the Amendment into account.

“Until now, state agencies have believed that they don’t have any more obligations under the ERA than they had under statutes and regulations,” Bomstein said. “We believe that the ERA, as correctly interpreted by the Supreme Court now, is a powerful tool by which people’s rights to clean air, clean water and other features of the environment are protected not only for the current generation and for future generations.”

Representatives of the Pennsylvania Independent Oil & Gas Association and the American Petroleum Institute did not respond to requests for comment.

The ruling also introduces a new challenge for lawmakers and officials trying to balance the 2017-18 state budget, since it says that revenues from the lease of state lands to oil and gas companies may not be used for day-to-day operations of the state overall, as some of them have been, but must be used to help the Department of Conservation and Natural Resources conserve the natural environment.

Gov. Tom Wolf’s proposed budget would allocate $115 million from the fund for the DCNR next year, more than twice as much as the $53.7 million planned to come from the General Fund.

Wolf’s spokesman, J.J. Abbott, said it’s unclear whether DCNR funding would be affected by the ruling. While the Court says the past use of lease funds for operational purposes violated the Environmental Rights Amendment, it’s uncertain whether that will affect the agency’s budget, he said.

“However, it bears noting that the Department of Conservation and Natural Resources’ entire mission revolves around the conservation of Pennsylvania’s natural resources, and its operational spending is all directed to the furtherance of this mission,” Abbott said.

In its ruling, the Supreme Court said the Amendment requires the Commonwealth to act as a trustee of natural resources, and so must use income from oil and gas leases to conserve and maintain those resources.

“The Commonwealth (including the Governor and the General Assembly) may not approach our public natural resources as a proprietor, and instead must at all times fulfill its role as a trustee,” the court wrote, in a 45-page decision.

It warned the legislature that it would violate the Amendment if it diverted funds from the leases for “non-trust purposes.” Any use of those funds in the general fund would probably require an accounting to show that the money had been used for furthering the state’s role as a trustee, the court said.