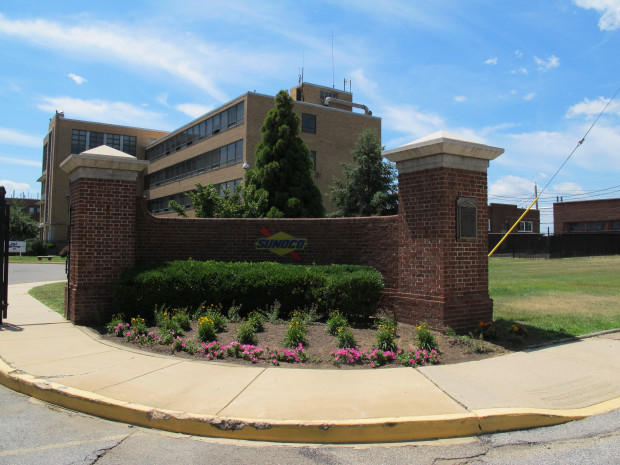 The entrance to Sunoco's refinery in Marcus Hook, Delaware County.

The leak, at 5530 Morgantown Road, Morgantown, Pa., did not reach water sources, according to the US Coastguard’s National Response Center, which records spills of hazardous materials such as oil and chemicals. When de-pressurized by a leak, the natural gas liquids can become a gas, which is released to the atmosphere. In those cases, the danger lies in ignition, there was no ignition in this case.

Jeff Shields, a spokesman for Sunoco, confirmed that about 20 barrels of the liquids leaked from the line. After being notified of a possible leak on April 1, company officials confirmed the release, shut down the line and made the repair over the next few days, Shields said.

He said there were no public safety impacts and that the cause is being investigated in cooperation with regulators.

Asked why the company had not announced the incident sooner, Shields said that Sunoco alerted the National Response Center on the day it discovered the leak, and that its notification was public information. The company also notified local authorities and regulatory agencies, which determined that no emergency response was required, he said.

He said the company will make a full report of the incident to the federal pipeline regulator, PHMSA, within 30 days, as required. PHMSA confirmed knowledge of the leak, but a spokesman said the agency is still investigating.

“When public safety is broadly affected, we work in conjunction with the authorities to notify the affected areas while we are responding,” Shields said in a statement. “We have and will continue to be transparent about the safety of our pipelines and continue to hold the safety of our neighbors and employees as our most important responsibility.”

The Pennsylvania Public Utility Commission, which regulates pipelines, confirmed that there had been an incident, but did not specify the nature or quantity of the materials involved, whether there was an effect on the environment, or the possible cause of the leak.

Hagen-Frederiksen said the the PUC is coordinating its efforts with the federal Pipeline and Hazarous Materials Safety Administration — which did not immediately respond to a request for comment. He said federal, state and local emergency management agencies were alerted.

The Pennsylvania Emergency Management Agency said it received a report on April 1 that the liquids were leaking from an eight-inch “hazardous liquid steel pipeline” and that sub-surface soil had been affected. A PEMA report said there were no fatalities, injuries or fire, and that the pipeline was being shut down.

Mariner East 1, which carries natural gas liquids from western Pennsylvania to an export terminal at Marcus Hook near Philadelphia, runs along the same route as Mariner East 2, another Sunoco NGL line that is now under construction.

Opponents of the new line say that nearby residents, especially in densely populated areas of suburban Philadelphia, would be in danger if there was a leak or rupture of the line, which will carry highly pressurized ethane, propane and butane.

Eric Friedman, a pipeline safety campaigner, accused Sunoco and the government agencies that were informed about the incident of failing to make it clear to the public.

“While information about this accident was made available to a number of government agencies, including PHMSA, PUC and DEP (Department of Environmental Protection), and the local fire department, apparently no agency saw fit to inform the public beyond publishing the information reported by Sunoco in an obscure location and buried in a very large data set,” Friedman said.

Friedman stressed that it’s the third leak on the line in the past year.

Sunoco’s Jeff Shields says those incidents were small. “Each of those involved a small amount of propane-ethane that “wept” from an O-ring that was determined to be faulty and was replaced,” said in an email.

Karen Feridun of the anti-fracking group Berks Gas Truth accused officials of trying to keep the public unaware of the incident.

“It is beyond irresponsible for an incident like this to be kept from the public,” Feridun said.

The Public Utility Commissions’ Nils Hagen-Frederiksen said public notices are not made until the investigations are complete.

Clarification: An earlier version of this story cited a spokeswoman for the Berks County Department of Emergency Services as saying the agency had no record of the incident. The agency’s director, Brian Gottschall, said that it had in fact received an “administrative” notification of the incident from Pennsylvania authorities but did not receive any 911 calls and so did not send any emergency units to the incident.