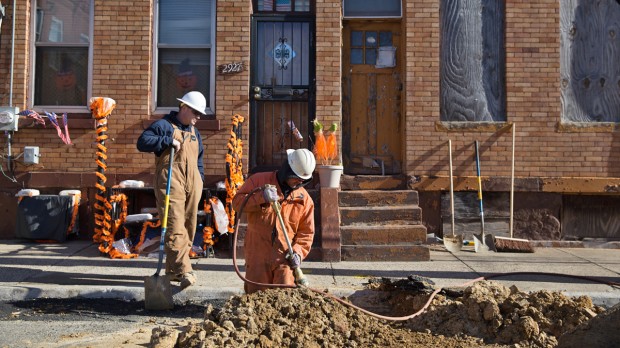 Philadelphia Gas Works is asking state regulators for permission to raise its rates and generate $70 million more in revenue because of climate change.

Meanwhile, the cost of doing business has gone up and natural gas prices have gone down, said spokesman Barry O’Sullivan.

Last year, the Pennsylvania Public Utility Commission approved a surcharge to help PGW speed up replacement of 1,500 miles of its oldest and leakiest gas mains.

O’Sullivan said the company has seen other costs rise over the years, including healthcare for its employees and maintenance of its two plants.

If the PUC approves the base rate hike, residential customers could see their monthly gas bills rise by about $10 on average.

PGW expects demand will continue to decline as the effects of climate change continue.

The company has shifted away from using a 30-year average to a 10-year model to predict how much natural gas customers will need to heat their homes and power their businesses.

PGW is allowed to tweak its rates to keep up with fluctuating temperatures through its “weather normalization adjustment” program, but now CEO Craig White said in a statement the company has “no choice but to request an increase.”

As the PUC considers PGW’s request, it can expect scrutiny by consumer advocates like Robert Ballenger, an attorney with Philadelphia-based Community Legal Services who represents low-income residential customers.

While the utility argues residential customers would still be paying less per month on average than they did in 2010 when gas prices were higher, Ballenger estimates there could be about 100,000 PGW customers who may no longer be able to afford their energy bills if their rates go up.

He points out one way the utility is looking to boost revenue is by increasing its “customer charge” from $12 to $18 a month.

“For a lot of families, the problem is you can’t reduce that charge,” Ballenger said. “So if I use less gas, I’d still have to pay that 50 percent increase in just my customer charge.”

The PUC will eventually hold public hearings on PGW’s proposal and it could be about nine months before the commission makes a final decision.