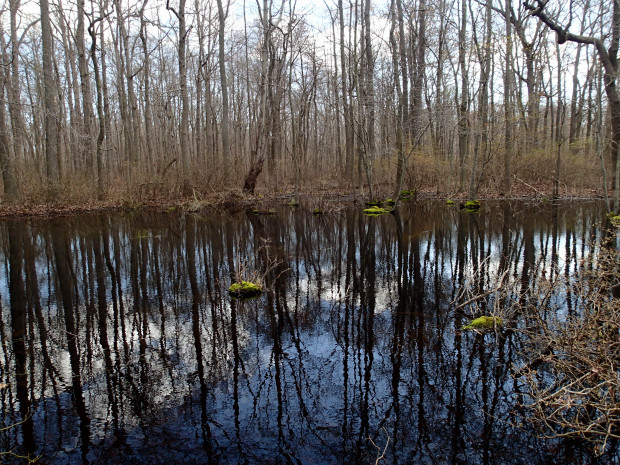 A photo of a Delmarva bay in spring shows the wetland. In summer and fall this same wetland is dry. Under Obama's Waters of the U.S. Rule this isolated wetland would be protected, if Trump withdraws the rule, it would not be protected under the Clean Water Act.

Update: President Trump signed an order Tuesday afternoon instructing the EPA and Army Corps of Engineers to re-do the rule.

On the campaign trail, President Trump promised to get rid of regulations, especially those designed to protect the environment. One of those regulations has to do with water. In fact very small bodies of water. It’s often referred to as the Waters of the U.S. Rule (WOTUS), or the clean water rule, and it’s the Obama administration’s attempt to define which isolated wetlands, or intermittent streams, are regulated under the Clean Water Act, passed in 1972.

The Trump administration is expected to announce this week a reversal of the rule, which was challenged in court soon after it was enacted in 2015 and has since been blocked from enforcement.

When Congress passed the Clean Water Act 25 years ago, it defined waters that would need some protection from pollution as “navigable.” For most of us that means big enough to float a boat. But when it comes to pollution sources, the need to provide clean water extends upstream of large river systems.

“Everyone agrees it doesn’t strictly mean navigable anymore,” says Owen McDonough, with the National Association of Home Builders – one of the industry groups that opposes WOTUS. “We’re not talking about, for instance, things like the Susquehanna River, or Chesapeake Bay. But as you get farther and farther upstream, into headwaters of streams, that’s been a pretty difficult line to draw.”

McDonough says the gray area included intermittent or ephemeral streams, those that may not flow unless there’s a heavy rain, or isolated wetlands, or ponds. Those areas that are sometimes land, sometimes water.

Over the years, Congress tried and failed to clarify the rule. Past administrations tried and failed as well. And the courts seemed to add to the confusion over what among these tiny waterways deserved protection from pollution discharge and run-off, and what didn’t. 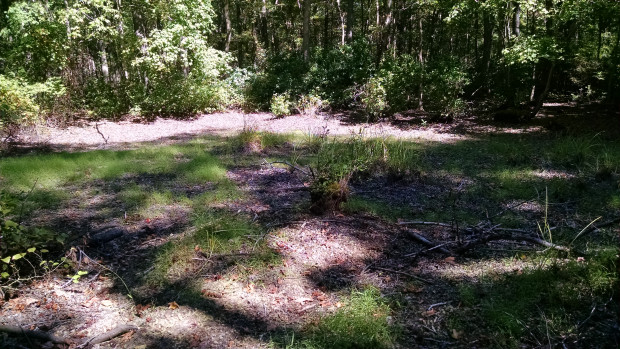 This photo shows the same Delmarva Bay as above but in summer. These coastal plain wetlands are seasonally wet in winter and spring, fed by groundwater and rain. They become dry in summer and fall.

Everyone said they wanted clarity

In 2015, Obama Administration tried once and for all to define exactly what would be regulated under the federal Clean Water Act. After several years of research, including analysis of 1,200 peer-reviewed studies, the EPA defined a tributary as having a “bed, banks and ordinary high water mark,” which flowed downstream. It defined “adjacent wetlands and waters” as those “within a minimum of 100 feet and within the 100-year floodplain to a maximum of 1,500 feet of the ordinary high water mark” to the regulated tributaries or waterways.

And it included protection for isolated wetlands, like Prairie potholes out west, coastal prairie wetlands in Texas and what’s known locally as Delmarva bays. These are isolated, small wet areas fed by groundwater and seasonal rain. There are more than one thousand of these wetlands in Delaware, where they serve as nurseries for frogs and salamanders.

“They’re really unique and contain rare plant species,” says Mark Biddle, an environmental scientist with the Delaware Department of Natural Resources and Environmental Control. Biddle says Delaware itself doesn’t regulate non-tidal wetlands, so without the federal clean water rule, the Delmarva bays would not be protected from pollution discharges.

Industry has long pushed for clarity on these waters. In the absence of clear definitions, it was up to different regional offices of the Army Corps of Engineers to decide what required a permit and what didn’t. But when the EPA announced the rule in 2015 it garnered criticism from the oil and gas industry, builders, and farmers who think it goes too far.

The Farm Bureau began what it called the “Ditch the Rule” campaign, criticizing the regulation as causing even more confusion for farmers who feared they would need a permit to discharge into every ditch or puddle on their farm. 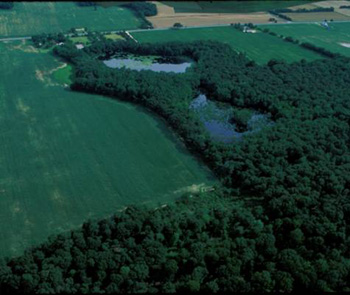 An aerial view of a coastal plain ponds in Delaware, also known as Delmarva bays. If the Trump administration scraps the Waters of the U.S. Rule, these waters would not be protected from pollution discharges.

Don Parrish with the American Farm Bureau Federation says the EPA did a bad job listening to their concerns.

Parrish says the threats to farmers are very real, because not getting a permit carries heavy fines or even jail time. He says the way the rule was written, it made it very difficult for farmers and ranchers to know if they would be breaking the law.

When the EPA announced the final rule in May, 2015, then EPA Administrator Gina McCarthy said the agency received more than one million comments.

Of the million-plus comments McCarthy said she heard plenty about the status of ditches.

The EPA insisted the new rule would not impact farmers and ranchers, and would actually help protect their water. The agency estimated the Waters of the U.S. Rule would have resulted in an increase of regulated waters of just three to five percent.

Ellen Gilinsky worked for the EPA under Obama, where she advised on the Waters of the U.S. Rule. Gilinsky says the agency did a bad job communicating details of the new rule. 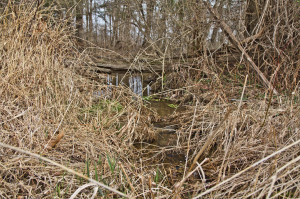 Massey Run in Chester County is an intermittent stream, meaning it does not flow all year round, but when it does, it runs into Crum Creek. Here it is at the end of February.

“Obviously if there’s a lot of confusion out there, you have to look at how you were communicating the message,” said Gilinsky. “But honestly, I think there’s a lot of folks out there who just didn’t like regulation. We’re seeing that in the government right now. And they were just determined that anything we did was not going to be good enough, short of ‘if you can’t float a boat in it, it’s not jurisdictional.’ And that’s just really shortsighted.”

Gilinsky says farmers and ranchers have exemptions from many provisions of the Clean Water Act. But she says it’s important that other don’t.

“So many of our water ways receive pollutants from sewage treatment plants and discharges from industry [into] small streams and can you imagine if those weren’t regulated?” she said. “If you didn’t require permits for those discharges you’d have a lot of water pollution, and really people want clean water.”

Builders, who don’t have exemptions, didn’t like the EPA’s final rule. Owen Mcdonough with the Home Builder’s Association, says the exemptions granted to farmers wouldn’t carry over to developers. 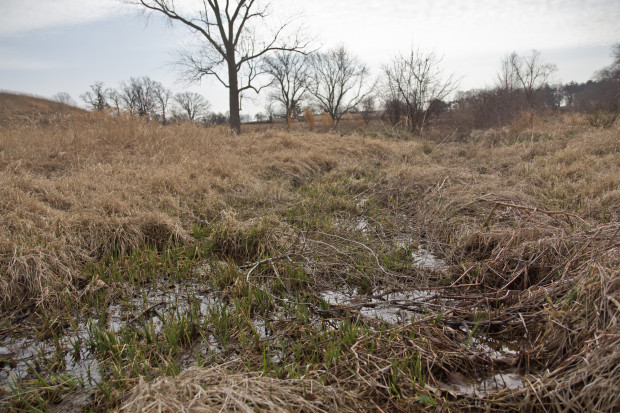 Massey Run is an intermittent stream in Chester County, PA. In this February, 2016 photo the stream is draining into nearby Crum Creek.

“Think about a farm field in Bucks County Pennsylvania that is changing hands from a long time farmer to a builder and developer,” said McDonough. “And that developer is all of a sudden faced with a property that has jurisdictional waters of the U.S., for which he or she has to secure federal permits, and offset his impacts with mitigation.”

By jurisdictional, McDonough means they would be regulated under the Clean Water Act. He says builders have to spend a lot of money hiring environmental consultants to survey the land and to help secure those federal permits. He says the rule would prevent builders from buying property if they think the land includes water regulated by the Clean Water Act.

Opponents to the rule now have a powerful ally in President Trump.

Trump’s new EPA chief, Scott Pruitt sued the agency when he was attorney general of Oklahoma over the Water’s of the U.S. Rule. That lawsuit has meant the new rule has never been enforced, and the status quo has remained. Pruitt is expected to scrap what the Obama Administration did, and start from scratch, which could take years, leaving the current uncertainty in place.

Leaving it to the states to decide

Even when Trump gets rid of WOTUS, about 20 states across the country would not be impacted because they have state laws that are more stringent than the federal rules, including Pennsylvania. But that’s not enough protection for some.

David Kinney is mid-Atlantic policy director for Trout Unlimited, a conservation organization that supports WOTUS. Kinney says those ephemeral or intermittent streams are important nurseries for trout. And he says although Pennsylvania has done a good job protecting native trout streams, loss of federal protections could mean the state backtracking on its Clean Streams law.

“If you weaken that federal regulation and say the Clean Water Act no longer applies to these streams, you end up with a situation where it’s now left up to the states,” said Kinney.”And the question is whether weakening at one level leads to weakening it at another level.”

Kinney says the state Department of Environmental Protection is underfunded and understaffed. And he says it’s always better to prevent upstream pollution, rather than treating it downstream, which is more expensive.

Pa. owed 'hundreds of thousands of dollars' in royalties from forest drilling