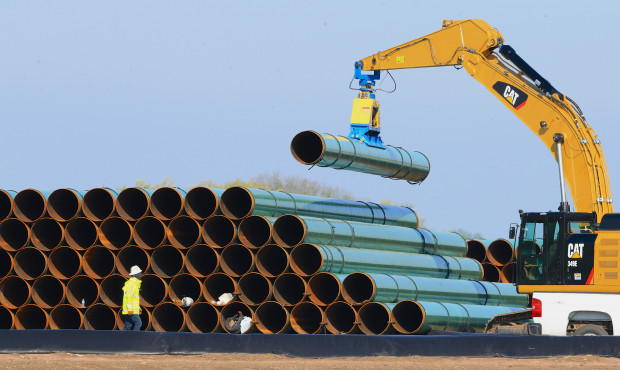 In this May 9, 2015 file photo, pipes for the proposed Dakota Access Pipeline are stacked at a staging area in Worthing, S.D. Sunoco Logistics received state permits to construct the Mariner East 2 pipeline, but the company still needs permits from the Army Corps of Engineers.

As the issue over construction of the Mariner East 2 plays out in court, Sunoco is also waiting on a number of permits from the U.S. Army Corps of Engineers. The Army Corps requires permits under section 404 of the federal Clean Water Act whenever dredging material would be discharged into waterways or wetlands. The Army Corps also has to approve plans for horizontal directional drilling that runs beneath navigable water ways like rivers and harbors.

Wade Chandler, chief of the Pennsylvania section for the Army Corps of Engineers, says the Corps is still reviewing Sunoco’s applications for permits, and says there’s no required timeline associated with issuing them. Chandler didn’t know exactly how many permits were awaiting approval, but said it’s in the hundreds, and they’ve been working closely with the DEP on the project. He says the majority of the permits under review are classified as “general”, meaning the activity would have minimal impact.

Individual permits include impact that covers more than an acre of land. They require more scrutiny, including a public comment period, which has since closed.

The Army Corps also has a separate process when it comes to construction on property owned by the agency. The Mariner East 2 pipeline goes through several Corps properties, including Raystown Lake in Huntingdon County. Construction close to or beneath Raystown Lake does not require permits from the Army Corps, because there’s no planned discharge into the water, and although Sunoco plans to drill beneath the lake, it’s not considered navigable. But the Corps does require review of construction on its own property. Chandler said he’s not sure the status of that review.

Meanwhile, the DEP has already held its pre-construction meeting with Sunoco regarding construction of the pipeline in Raystown Lake, and waived a 7-day waiting period, allowing the company to begin construction. But without approval from the Corps, no construction can begin.

DEP’s permits contain the condition that Sunoco needs “Federal authorization for this project and such authorization is required prior to starting your project.”

It’s unclear whether that means construction can’t start at any place along the 350-mile pipeline route before gaining the federal permits, or if the DEP was referring only to those water crossings and drilling areas that are within the Army Corps jurisdiction. DEP did not respond to a question for clarification.

But the Corps’ Chandler said from their perspective, Sunoco can start construction in non-jurisdictional areas.

“If they’re doing work that doesn’t require a (federal) permit we can’t say no to it,” he said.