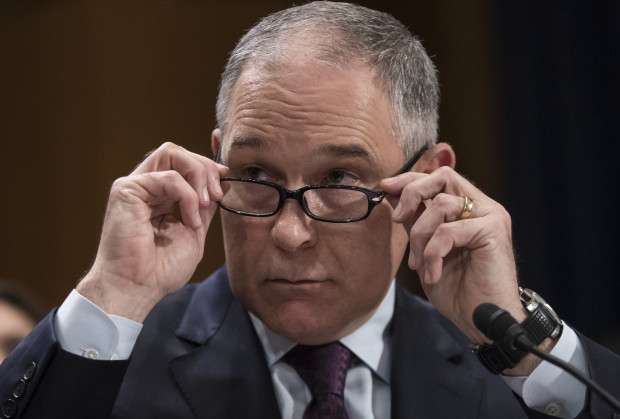 Scott Pruitt, President-elect Donald Trump’s nominee to run the Environmental Protection Agency, testifies at his confirmation hearing before the Senate Environment and Public Works Committee on Capitol Hill in Washington, Wednesday, Jan. 18, 2017. The nomination of Pruitt, currently Oklahoma’s attorney general, to lead the EPA is being fiercely opposed by environmental groups that point to fundraising ties with corporations he has sued to protect. Scott Applewhite / AP Photo

The Trump administration has implemented a temporary media “black out” at the Environmental Protection Agency, according to a report by the Associated Press that cited emails to EPA staffers. EPA press releases, blog post updates, and social media posts are banned for an indeterminate amount of time. All media requests are to be forwarded to the Agency’s office of administration. The Trump administration also imposed a freeze on new grants and contracts. A spokesperson for Pennsylvania’s Department of Environmental Protection says it’s too early to know what this could mean for the state’s environmental protection programs.

“However, suspension of EPA grants for any duration of time would significantly disrupt the work of the agency to protect public health and the environment,” said DEP spokesman Neil Shader. “EPA grants to DEP amount to approximately $36 million per fiscal year, and cover a variety of issues, ranging from clean water protection, municipal stormwater projects and watershed restoration (like the Chesapeake Bay) to hazardous site cleanup to air quality.”

A staffer for EPA Region 3, which includes Pennsylvania and Delaware, told StateImpact that their only knowledge of the media blackout and grant freeze came from media reports.

Charles McPhedran, a former EPA Region 3 employee who now works as an environmental attorney with Earthjustice, said the actions of the Trump administration over the last several days harkens back to the first year of the Reagan administration, when his first appointee to run the agency Ann Gorsuch worked to roll back regulations and halt enforcement, while Rita Lavelle, who ran the superfund program under Reagan, was sent to jail for lying to Congress.

“This administration is unpredictable,” said McPhedran. “I don’t know what we’re going to see, but Congress and the public caught up with Ronald Reagan.”

Joe Minott is the executive director of the Clean Air Council. Minott says it’s not unusual for there to be a “pause” at federal agencies at the start of a new administration when staffers are discerning what the new presidents priorities will be. But Minott says this time it’s different.

“This is much more of a gag order,” said Minott.  “No press releases, don’t talk to people on the outside, no grants.”

The EPA issues grants to local and state government for air and water monitoring, as well as environmental clean-up.

Former DEP secretary John Quigley said if EPA funding to local and state governments gets cut, it could have public health impacts. Quigley said it’s important for local and state regulators to have the funds to monitor things like air quality, especially for those who suffer from asthma.

“People are going to get sick and die,” he said. “That’s not an exaggeration.”

Andrew Homsey, a manager with the University of Delaware’s Water Resources Center, predicted that Trump’s actions would have a “chilling” effect on the EPA, and that its employees would fear losing their jobs.

Homsey said his team has won grants totaling about $100,000 from EPA in recent years but the President’s latest actions on EPA raise doubts about whether the center, which researches into water quality and wetlands protection, will qualify for future support from the agency.
“We are not going to be counting on some of the grant programs,” Homsey said, on the sidelines of an environmental conference in Cape May, NJ.
He described Trump’s actions on EPA as a “blitzkrieg”, and said they suggest the new administration will loosen regulations, especially on carbon emissions.