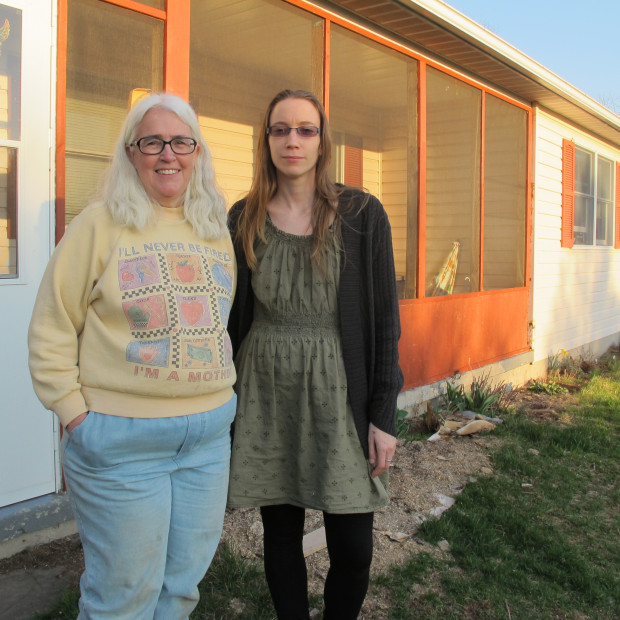 Ellen Gerhart (L) with her daughter Elise Gerhart (R) in front of the family home in Huntingdon County. They are fighting eminent domain taking by Sunoco for the Mariner East 2 pipeline.

Landowners battling pipeline companies over eminent domain takings got an early Christmas gift from the Commonwealth Court in the form of a new legal maneuver this week. An attorney representing a family fighting Sunoco’s Mariner East 2 pipeline in Huntingdon County will be able to use a recent Supreme Court ruling to try to strengthen their case.
In September, the Pennsylvania Supreme Court ruled in the landmark Robinson Township case, which overturned aspects of the state’s new oil and gas law Act 13, that the legislature could not grant eminent domain authority to companies building gas storage facilities. The court’s decision hinged on the fact that the public was not the “primary and paramount” beneficiary, as the state had claimed.

“Instead, it advances the proposition that allowing such takings would somehow advance the development of infrastructure of the Commonwealth. Such a projected benefit is speculative, and, in any event, would be merely an incidental one and not the primary purpose for allowing these takings,” wrote Justice Debra McCloskey Todd for the majority.

Although neither the Supreme Court decision, nor the Robinson Township case, addressed pipelines, many wonder if the same argument could be applied in the hundreds of cases pending before county level courts. In case after case, for those challenging eminent domain takings by Sunoco across the 350-mile route, the courts have ruled against landowners. But this decision appears to open the door a bit for the Gerhart family, and possibly others, through the use of a new argument.
Ellen Gerhart and her daughter Elise have become vocal opponents of Sunoco’s plans. In efforts to prevent tree-clearing this year Elise Gerhart camped out in a tree, and Ellen Gerhart was arrested for trespassing on her own land. The charges were recently dropped. The Gerharts had lost their eminent domain case against Sunoco in Huntingdon County Court of Common Pleas, but appealed to the Commonwealth Court where the case is still pending.
The family’s lawyer Rich Raiders had already filed the appropriate briefs, and the deadline for submitting more arguments to the court had passed before the Supreme Court ruled against eminent domain for gas storage in September. But Raiders asked the court for the opportunity to file new information based on the Supreme Court’s Robinson Township decision, and he found out Monday that his motion was granted. Raiders says he thinks the Supreme Court justices may be interested in looking at the issue of eminent domain and pipelines.
“If the Commonwealth Court is letting me brief this issue, it is a hint that there’s interest above,” Raiders told StateImpact.
Raiders said the question that needs addressed in the Mariner East 2 case is whether or not the commonwealth is the “primary and paramount” beneficiary of a pipeline that carries product for export. More generally, there is the question of the role played by the Public Utility Commission, and whether the PUC has to consider if the state, or public, is the “primary and paramount” beneficiary of an infrastructure project before it grants a company public utility status. Currently, the PUC sees its role as the agency that grants a pipeline company public utility status, but has no role over where and how the pipelines are built. Nor does it see itself as the agency that allows for eminent domain takings. But once the PUC grants public utility status to a company, the courts have time and again interpreted that as authorization of eminent domain.
Sunoco would not comment on the pending case. But in the past, it has said that the Mariner East 2 pipeline would serve a public benefit because it would include two off-loading sites to provide necessary heating fuel in wintertime to state residents. That assertion has been questioned by opponents, who say that Sunoco’s Mariner East 1 pipeline currently carries more than enough fuel to satisfy the state’s needs. A Sunoco official’s testimony in the Gerhart case seems to support that.
In the meantime, Sunoco has already cut trees along the proposed pipeline’s path on the Gerhart’s property. Sunoco can’t move forward with constructing the pipeline until the company gets permits from the Department of Environmental Protection. But the company says it’s planning to complete the project by the end of September 2017.