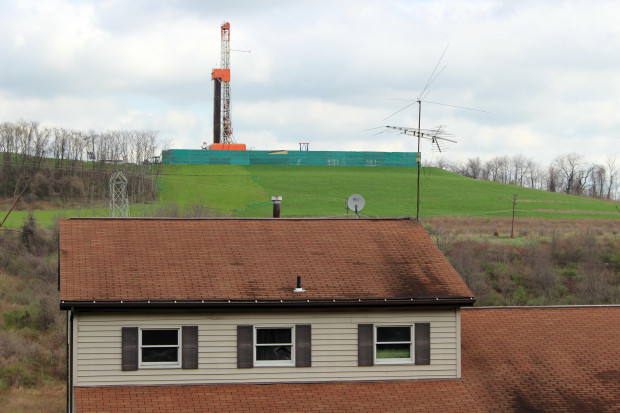 A natural gas rig in Washington, Pa. A 2012 law created the gas impact fees to mitigate the negative consequences of drilling to communities, but state auditors say millions of dollars where spent improperly.

Pennsylvania counties and municipalities mishandled millions of dollars meant to offset the negative effects of the Marcellus Shale gas boom, according to a report published Tuesday by the state Auditor General.
In one notable example, auditors say North Strabane Township, Washington County, spent $32,602 on recreational events and parties– including $7,500 on fireworks, $1,200 for a performance by former American Idol contestant Adam Brock, and $4,250 on inflatable party rentals.
“I’m pro-people having fun at the holidays,” says state Auditor General Eugene DePasquale (D), “But the impact fee was used for a bouncy house. Come on, that’s crazy.”


North Strabane Township manager, Frank Siffrinn, says the spending happened the first year the township received the impact fee money, and was not a violation of the law, which allows the fees to be spent on “parks and recreation.” Since then, the township has spent it on fire protection and road projects.
“There is some ambiguity in the act,” says Siffrinn. “I think there is a problem, and that needs to be corrected by the legislature.”
DePasquale agrees.
“Where we are seeing a problem with the spending is when local governments fail to connect the expenditures to the oil and gas drilling activity,” says DePasquale.
The impact fee money is collected annually from oil and gas companies and funneled to local governments, with the largest share going to the most heavily-drilled areas. Over the years it has brought in more than a billion dollars. It’s intended to be used to mitigate disruptions from Marcellus Shale drilling, such as wear-and-tear on roadways, increases in crime, and housing shortages.
Local governments are only supposed to spend the money 13 different ways, including things like public infrastructure improvements, emergency preparedness, affordable housing, judicial services, and environmental programs.
The main issue is a lack of clarity in those 13 broad spending categories, according to DePasquale, who adds the law also created a weak system for financial reporting.
“Right now, we essentially have 37 counties and 1,487 municipalities independently interpreting the flawed language in Act 13,” he says.
Among the county and municipality expenditures reviewed, auditors found $20.2 million– or 24 percent– of the funds received were spent in questionable ways, including $5.2 million for payroll in the Susquehanna County district attorney’s office and $2.5 million in cash advances to the Tioga County Department of Human Services to cover its operating expenses due to last year’s historic state budget impasse.
As StateImpact Pennsylvania has previously reported, millions of dollars in impact fees are unaccounted for each year because local governments don’t fill out paperwork properly. The law gives the state Public Utility Commission (PUC) the ability to collect and distribute the funds, but it doesn’t have any enforcement mechanisms to crackdown on problems.
The audit has 8 recommendations for the General Assembly on how to strengthen the law and 8 recommendations to the PUC on how to track the money more effectively.
Act 13 was designed to allow for local control, says Jennifer Kocher, a spokesman for state Senate GOP, but says the caucus is open to making minor tweaks to the law.
“To the degree that any local municipalities stray from those parameters, that spending should cease,” Kocher writes in an email. “We are willing to look at several of the issues related to that as raised by the Auditor General.”
The PUC agrees with some of the audit’s recommendations, but spokesman Nils Hagen-Frederiksen notes the commission has accurately collected and distributed the funds, in compliance with the law.
“The PUC didn’t lobby for these responsibilities,” he says “It does not have the jurisdiction to audit, monitor, or verify local spending– that’s not part of the act. Would the PUC try to do that, those distributions could legally be challenged.”