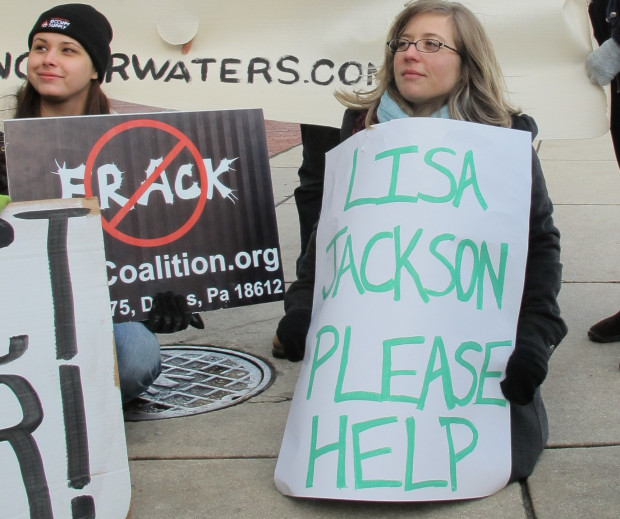 A protester urges then EPA Administrator Lisa Jackson to intervene in Dimock’s water contamination during a visit by Jackson to Philadelphia in 2012. While leading the EPA, Jackson initiated the study on fracking.

New documents have emerged that show the EPA downplayed the risks of fracking in a landmark report on the process used to extract oil and gas from shale. The last minute changes made by the EPA are documented in a story by the public radio show Marketplace and APM Reports. The news outlets obtained documents that showed the EPA had changed language in the executive summary six weeks before its release to the public, which stated the agency did not find shale gas drilling resulted in “widespread systemic impacts” to drinking water. The documents also revealed similar changes to the accompanying press release.
Questions remain on who made the changes and why.
The EPA’s long-awaited report was supposed to settle the question once and for all on whether or not fracking for oil and gas damages water supplies, using science not politics. In Pennsylvania, there were already more than 250 documented cases in which fracking damaged private drinking water supplies.
But when the EPA’s draft report was issued in June of 2015, the executive summary read that fracking did not cause “widespread systemic impacts” on drinking water. The report was cheered by industry, and spurned by environmentalists.
Reading the body of the report, however, and the science told a different story. The EPA’s own Science Advisory Board then issued a critical review of the EPA’s headline, saying the language confused the public and needed clarification.
Michael Halpern, with the Union of Concerned Scientists, sought documents from the EPA through a right-to-know request. What Halpern got was a big stack of redacted documents.
Halpern worries about scientific integrity at the EPA under a Trump administration. “Given the names that are circulating for key positions in the Trump administration, who are oil and gas industry insiders and lobbyists,” he said, “I’m very concerned that science that is critical to protecting public health and safety will be more vulnerable to spin and suppression.”
The Obama administration has pinned its climate change fight on the Clean Power Plan, which depends heavily on the use of natural gas as a bridge fuel to renewables. That plan, however, is in jeopardy. In addition to court challenges, president-elect Trump has said he plans to scrap it and encourage fossil fuel use.
Correction/clarification: An earlier version of this piece implied that the documents showing the changes to the EPA’s draft report were originally obtained by the Union of Concerned Scientists. The UCS did do it’s own right-to-know request. But Marketplace and APM Reports obtained the documents referenced in their piece from other sources. Also, Michael Halpern’s name was misspelled in the original story, it is Halpern, not Halperin.