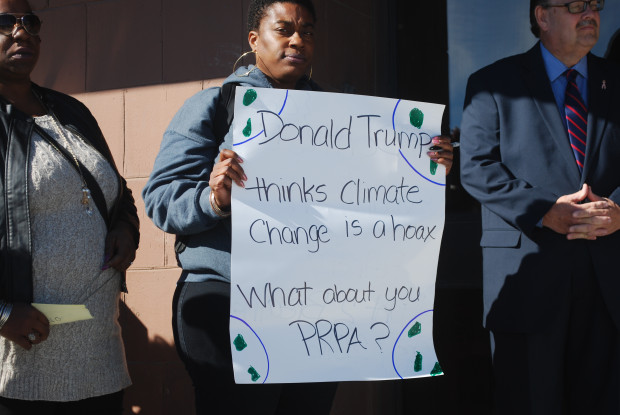 Climate activists on Thursday urged the Philadelphia Regional Port Authority to reject a plan by Philadelphia Energy Solutions to build a terminal for oil imports and exports at the Southport Marine site in Philadelphia, saying the proposal would add to greenhouse gas emissions.
Demonstrators from environmental groups including Food & Water Watch and Philly Thrive stuck dozens of post-it notes on the window of the PRPA’s building in northeast Philadelphia ahead of a December 15 deadline for receipt of proposals for the project. The protestors asked the authority to
block any fossil-fuel development at Southport, adjacent to the Philadelphia Navy Yard.
The event, attended by about two dozen people, was the latest effort to stop the project, and follows a letter from the Philadelphia Democratic delegation to the state assembly in October calling on the authority to avoid any fossil-fuel development when making its selection. 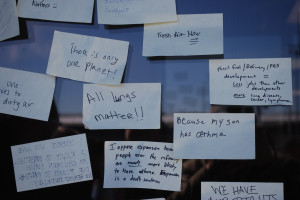 Philadelphia Energy Solutions (PES), which operates the South Philadelphia Refinery, wants to build tanks, piping and a dock on two sites totaling some 200 acres at Southport for importing, exporting and storing crude oil and petroleum products. The company is one of six bidders who are proposing to build other facilities including container terminals and warehousing on three sites in a project that would be the first major port development in Philadelphia for some 40 years.
Cherice Corley, a spokeswoman for PES, declined to comment on the protest.
Participants at the event said they would also oppose any other bidders whose plans included fossil-fuel development.
The protestors attempted to enter the PRPA’s building to deliver an over-sized Post-It note to authority chairman Gerard Sweeney but were prevented from entering by Don Brennan, the authority’s Director of Governmental and Public Affairs. Brennan said allowing the participants into the building would be disruptive to the authority and other occupants of the building, but he said the protestors’ notes and views would be taken into account when the PRPA makes its decision.
“Your participation and your input is taken very seriously by this board,” Brennan told the protestors. “Dissent is part of any transparent process, and it’s welcome – it is not lip service to the Philadelphia Regional Port Authority.”
Brennan said he would give Sweeney the handwritten notes which included messages such as “The climate can’t tolerate any more fossil fuels. It is crisis time” and “No sacrifice zones.” Brennan said he did not know when the authority would select a winning bid for the Southport project.
Two days after the presidential election, some protestors urged the PRPA not to deny a link between fossil fuels and climate change, as espoused by president-elect Donald Trump during the campaign.
Kia Hinton, who lives near the PES refinery in southwest Philadelphia, carried a sign saying:  “Donald Trump thinks climate change is a hoax. What about you, PRPA?”
Brian Ratcliffe, another protestor, said participants were focused on the PES proposal because it would represent an additional source of carbon emissions at a time when existing emissions are already expected to boost global temperatures by more than a target set by climate experts.
“We need to be scaling back our use of fossil fuels in a radical way in order to have any prayer of keeping the biosphere intact,” Ratcliffe said.