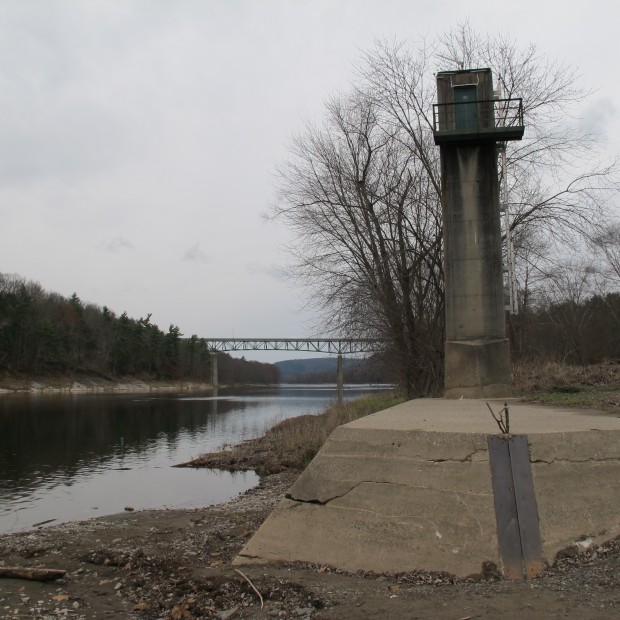 A river gage, built in the 1930's, sits along the Delaware River in Milford, Pa. The gage continues to be used as a way to divvy up shared water resources for New York, New Jersey, Pennsylvania, and Delaware.

Salty water from the Delaware Bay has crept up the Delaware River toward Philadelphia and is now at its highest point since 2010 because low river flows in the recent dry spell have been too weak to prevent the so-called salt front moving upstream, officials said.
The salt front was at river mile 85, between Chester, Pa. and Philadelphia International Airport at the latest reading on Oct. 20, making it 13 miles further upstream than it normally is at this time of year, the Delaware River Basin Commission (DRBC) said on Wednesday.
While the salt front was still 25 miles downstream from drinking water intakes at Torresdale in northeast Philadelphia, where the city gets 60 percent of its drinking water, officials are now considering how to prevent the salty water moving further upstream while conserving water in two Pennsylvania reservoirs that have been used to boost river flows since early September.
“We want to keep it away from the intakes, for sure,” said Clarke Rupert, a spokesman for the DRBC, which regulates water supplies in the Pennsylvania, New Jersey, New York and Delaware portions of the basin.
In response to the prolonged shortage of rainfall, DRBC officials have been releasing water from the Beltzville and Blue Marsh reservoirs in an effort to maintain water flows in the river. They aim to maintain the volume of the river at Trenton at 3,000 cubic feet per second.
The reservoir levels have now dropped near the point at which officials will be required to cut their withdrawals, Rupert said. That would cut the flow at Trenton and further reduce the river’s resistance to the salt front.
While the water level in the Beltzville reservoir is now below the point that requires officials to reduce water withdrawals, the Blue Marsh reservoir is slightly above that limit. Regulations require both bodies of water to be below specified limits in order for withdrawals to be cut.
If the dry conditions continue, the DRBC must balance a requirement to conserve water levels in the reservoirs with a need to stop the salt front moving further up the river.
Those actions could be triggered if the regulator declares a drought warning which it said on Wednesday was “becoming likely” for the lower basin, downstream of Montague, NJ.
A drought warning would reduce the targeted flow at Trenton to 2,500-2,900 cubic feet per second, depending on the location of the salt front, Rupert said. If the salt front moves above river mile 92.5 – about seven miles upstream from its current location — officials would aim for a flow of 2,900 cubic feet per second.
Declaring a drought warning would also give DRBC the option of drawing water from Lake Wallenpaupack near Hawley, Pa., and from Merrill Creek Reservoir near Phillipsburg, NJ, but only if the targeted and actual flows at Trenton fell below 3,000 cubic feet per second for five consecutive days, Rupert said.
The salt front, defined as a concentration of 250mg per liter of chloride, is the furthest upstream since 2010 when it reached river mile 86. It is still below its highest recorded level at river mile 102, two miles north of the Ben Franklin Bridge, during the “drought of record” in the 1960s. And it is even further from the drinking water intakes at river mile 110 on both sides of the river.
But the prolonged dry spell, which has prompted Pennsylvania, New York, and New Jersey to declare drought warnings, has prompted officials to consider the consequences of continued low flows in the river.
“The salt front is currently more than 13 river miles upstream from its normal location for this time of year despite significant freshwater reservoir releases,” said Steve Tambini, executive director of the DRBC, in a statement. “If more water is needed to address salt-front management, we can expect additional declines in reservoir storage.”
Kelly Anderson, Manager of the Source Water Protection Program at Philadelphia Water Department, said officials there are watching the salt line but are confident that the DRBC will keep it well away from drinking water intakes.
“We have lots of eyes on it,” Anderson said. “We are confident in the stream-flow targets and the policies that have been developed by the DRBC.”
Anderson said reservoirs in Pennsylvania and New York work together to maintain water supplies to Philadelphia and other cities. “We are all benefiting from these reservoir policies,” she said. She added that the advancing salt line and the unusually low rainfall of recent months could be an early foretaste of the effects of climate change.
Rainfall in Pennsylvania counties bordering the Delaware River has been between 11 and 25 percent below average levels during the last 180 days, according to the National Weather Service.
The last time the DRBC declared a basin-wide drought emergency was in 2001-02 when the salt line rose to river mile 89.
The DRBC will be holding a public meeting on Nov. 9 to discuss current conditions to hear comments on current conditions and how to address them.
This story has been corrected to state that the salt front concentration is 250 mg per liter of chloride, not sodium.

EPA steps up pressure on FERC over new pipeline assessment