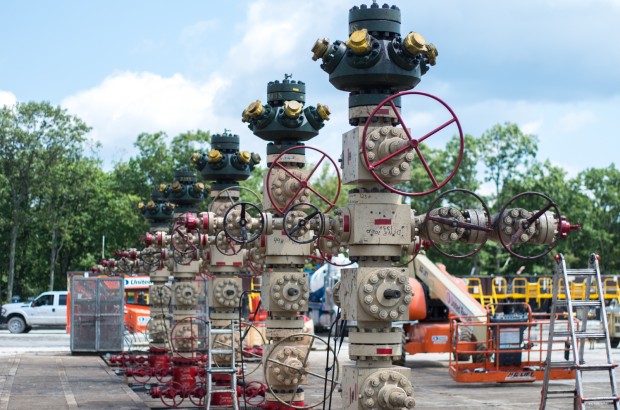 Legislative measures to protect the environment from natural gas wells like these in Lycoming County got less support in Harrisburg in the 2015-16 session, according to an annual report card

Pennsylvania’s state lawmakers voted less often for pro-environment legislation and more often for bills that would weaken environmental protection in the 2015-16 legislative session than they did the previous year, according to a tally published by four environmental groups on Wednesday.
An annual legislative scorecard from PennEnvironment, the Sierra Club, Clean Water Action and Conservation Voters of Pennsylvania found that the environmental voting record of the House as a whole dropped to 35 percent from 48 percent in the 2013-14 session, while the Senate’s environmental record declined to 38 percent from 41 percent.
In the latest session, House Democrats as a whole had a 72 percent rating, down from 81 percent in 2013-14, while Republicans dropped to 9 percent from 21 percent, the scorecard said. In the Senate, Democratic support for environmental measures dropped to 66 percent from 68 percent while the Republican rating edged up to 20 percent from 19 percent.
The scorecard, now in its third year, also rated the records of individual lawmakers, and found that those with a strong record of voting to protect the environment were in the minority on issues like fracking, protecting public lands, and climate change.
“What we found was a disturbing and ongoing trend of an anti-environmental state legislature that we believe will largely be remembered for their environmental attacks and rollback of protections,” said Steve Hvozdovich, Pennsylvania Campaigns Director for Clean Water Action, during a conference call with reporters.
Hvozdovich said such initiatives “know no party lines” and had been supported by Democrats as well as Republicans.
But the report showed that the highest ratings of 90 percent or better in both the House and the Senate were all held by Democrats, and those assigned a zero rating in both houses were all Republicans.
House GOP lawmakers earning zero ratings included Speaker Mike Turzai, and Reps. John Maher and Daryl Metcalf. Those with the highest ratings, 90 percent or higher, included Reps. Kevin Boyle, Dan Frankel and Greg Vitali, all Democrats.
Jenn Kocher, a spokeswoman for the Senate’s Republican majority, dismissed the scorecard as “cherry picking.”
“The Senate cast hundreds of votes last year and this group cherry-picked five votes to highlight their agenda while ignoring other measures taken to protect our natural resources,” she said.
Steve Miskin, a spokesman for the House Republicans, did not respond to a request for comment on the report.
Bills seen by the report’s authors as weakening the environment included an amendment to SB279 which exempted the conventional oil and gas industry from new regulations to protect the environment and public health. The bill was easily passed by the House and, as Act 52, was signed into law by Gov. Tom Wolf in June.
Lawmakers voting for the amendment included Stan Saylor, a Republican with a zero-percent environmental rating, while those against included Kevin Schreiber, a Democrat with a 100 percent record.
In the Senate, SB1195 to give lawmakers more time to debate implementation of Pennsylvania’s compliance with the federal Clean Power Plan to reduce power plant emissions was signed into law in June in the face of protests by the environmental community. Supporters included Richard Alloway, a Republican with a zero-percent environmental record, as well as John Blake, a Democrat with an environmental rating of only 60 percent.
Despite the broad environmental split along party lines, some lawmakers such as Bucks County Republican Gene DiGirolamo, who topped the House GOP scorecard with a 73 percent environmental rating, sometimes voted against party orthodoxy.
“I don’t necessarily go with my caucus point of view all the time, as a matter of fact I’m probably known for going against my caucus on a lot of different issues,” DiGirolamo told reporters.
The advocates said pro-environmental bills were often opposed by well-funded lobbyists representing the oil and gas industry in Harrisburg. Joanne Kilgour, director of the Sierra Club in Pennsylvania, said the industry has spent $67 million on lobbying since 2007, $8 million of which was in 2015.
The scorecard also showed stronger support for environmental bills around Philadelphia and Pittsburgh than in some rural areas of central Pennsylvania.
David Masur, director of PennEnvironment, said the environmental community is in a “David and Goliath” fight with the oil and gas industry, which he said has presented a “false dichotomy” that claims it’s not possible to have economic growth at the same time as environmental protection.
“More and more, we know that is a false choice,” he said.