Why pipeline safety is one of Pennsylvania's next big energy challenges 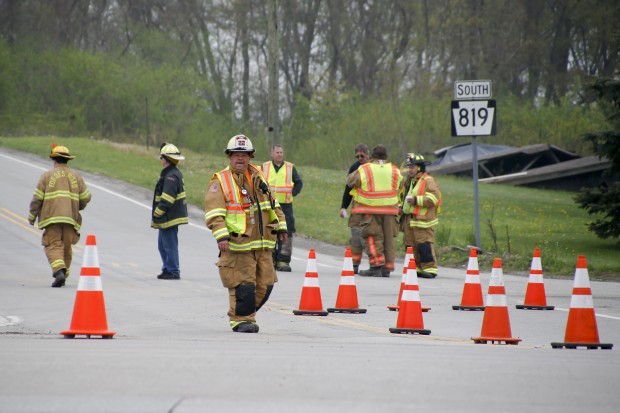 First responders block the access to the area where a natural gas explosion at a pipeline burned one person and damaged houses on Friday, April 29, 2016, in Salem Township, Pa. The explosion caused flames to shoot above nearby treetops in the largely rural area, about 30 miles east of Pittsburgh, and prompted authorities to evacuate businesses nearby.

On the morning of April 29, a natural gas transmission line exploded in a field in Salem Township in western Pennsylvania. The blast was so powerful it ripped a 12-foot crater into the landscape, burned a section of the field with a quarter-mile radius and threw a 25-foot section of the 30-inch steel pipeline 100 feet away. At the time of the explosion, a 26-year-old man was in his house, a few hundred feet away. He was badly burned, and his home destroyed.
When local fire chief Bob Rosatti arrived at the scene, the flames were so hot, he had to stay in his truck.
“They were massive—I would say 300 feet at the least,” Rosatti says. “That was the biggest fireball I’d ever seen in my life. Thank god it was in a rural area. It could have been a lot worse if it had been in a more populous area.”
Investigators think external corrosion on the pipe is to blame for the blast. But they are still poring over a decade’s worth of pipe inspection reports to determine exactly what caused it.
The explosion comes as the federal government is undertaking a new effort to make gas transmission pipelines safer. It has become an even more urgent issue now that the country is building more pipelines, especially in the Northeast. The fracking boom in the Marcellus and Utica shales is a big reason for that. The Department of Energy predicts Pennsylvania and Ohio will nearly double their natural gas production by 2030. Read more at The Allegheny Front.