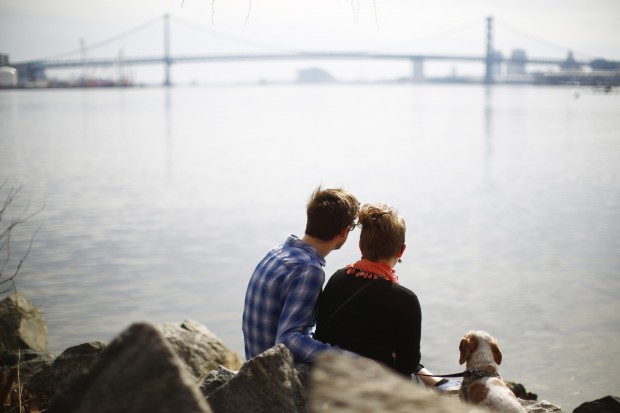 Brian Clores, left, Carissa Arty and their dog Elvis sit on the banks of the Delaware River in view of the Benjamin Franklin Bridge on a warm winter afternoon, Wednesday, March 11, 2015, at Penn Treaty Park in Philadelphia.

A plan to maintain water quality in the Lower Delaware River is broadly meeting its goal of “no measurable change”, the Delaware River Basin Commission said, in the first report on its Special Protection Waters program.
The interstate regulator this week released results of testing at 24 sites along a 76-mile stretch of the river from Portland, Pa./Columbia, NJ to Trenton, NJ, and found that most indicators of water quality showed no deterioration.
The report, running to almost 600 pages, compares baseline water quality data initially collected from 2000-2004 to the assessment period of 2009-2011.
“For most water quality parameters at most locations, there were no measurable changes to existing water quality,” said DRBC Executive Director Steve Tambini. “In fact, many tests revealed water-quality improvements.”
The tests found lower quantities of nutrients, a positive sign that goes against a national trend of higher nutrient content in many water bodies, the DRBC said.
On the downside, signifying “measurable change”, the tests revealed a higher level of chlorides and specific conductance at almost all locations, although not at levels that would endanger aquatic life, the report said. The chloride result was likely a result of winter road salting in the watershed, it added. The tests also found e coli at sites downstream from Frenchtown, NJ.
But there was no measurable change for 17 out of 20 parameters tested at almost all control points. These include alkalinity, hardness, pH, dissolved oxygen, temperature, turbidity, dissolved and suspended solids, all nutrient forms (ammonia, nitrate + nitrite, total nitrogen, total phosphorus, and orthophosphate), and two of the three tested bacteria parameters (enterococcus and fecal coliforms).
Tambini said the assessment demonstrates that the SPW program is working and plays an important role in protecting water quality in the DelawareRiver Basin. The program applies to the entire non-tidal length of the river as far south as Trenton after being extended to the Lower Delaware in 2008.
The program takes a watershed approach, looking at the drainage area of the designated waters and considers the impact of pollutants such as discharges from wastewater treatment plants. The result is an anti-degradation policy on one of the longest stretches of river in the nation, DRBC said.
The environmental group Delaware Riverkeeper Network, which pressed for the adoption of SPW status on the lower section of the river, said the DRBC report was “excellent news.”
“They have done a very thorough job and made sure they looked at all available data to ensure that there were no contrary data streams that might suggest the need for more investigation,” said Maya van Rossum, who heads the environmental group.
But she said the SPW program does not yet apply to non-point sources of pollution such as runoff from farms and salt from roads, and that needs to be implemented to address such problems.
Asked whether the publication of 2009-2011 data presents an accurate picture of current conditions, van Rossum said the report does likely reflect water quality some six years later but that can change if safeguards are not maintained.
“I think that what they have done does tell the story of what is happening in the river. But water quality can turn quite quickly and dramatically if the regulatory agencies and public are not constantly vigilant in preventing increasing and new pollution sources and in monitoring any changes,” she said.