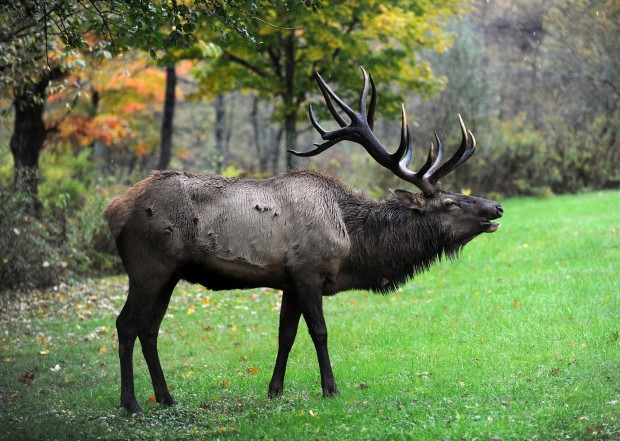 An elk near the Elk County Visitor Center, which is located on DCNR land.

The House could vote this week on a bill that would allow more private development in state parks, including golf courses, amusement parks, hotels, restaurants or office buildings. The proposal, HB 2013, was introduced by Brian Ellis R-Butler. It was originally written to include a board that would have the authority to approve private development in the parks, which are operated by the Department of Conservation and Natural Resources. But the bill is now amended to have DCNR hire a consultant, who would produce a report on how private development could take place in the state parks.
In introducing the bill, Rep. Ellis said Pennsylvania lags behind other states in offering modern accommodations. “West Virginia, for example, has a number of state parks with sizeable lodging facilities, conference centers and golfing,” wrote Ellis in his co-sponsoring memo.  “Ohio has similar facilities at nine of its state parks.  Pennsylvania, however, has one small bed and breakfast-type lodge at Bald Eagle State Park.”
It’s not the first time the legislature has considered opening up state parks to greater development, and has environmentalists worried that it’s inconsistent with the mission of state parks.
Former DCNR chief John Oliver, who served under Gov. Tom Ridge, wrote a letter to lawmakers opposing the bill.
“Besides undermining the principle of our public lands, this legislation would result in unsustainable projects that cost taxpayers more, and hurt those providers who have made tremendous investments close by the parks who depend on park visitors,” wrote Oliver. “There is no shortage of communities and landowners looking for this kind of economic development.”
DCNR does allow some concessions in parks, including two golf courses, but they’re not always big money-makers. A ski resort operated by a private developer in Denton Hill State Park closed several years ago and has yet to be re-opened.
In the most recent survey of park users, conducted every five years as a requirement for federal funds, respondents ranked the three top priorities for park improvements as more rental cabins, bike lanes, and natural and wild areas.
Governor Wolf’s spokesman Jeff Sheridan says the administration is committed to keeping with the park system’s mission.
“We have worked with the bill’s sponsor to craft language which will help DCNR identify and evaluate opportunities which may exist to establish additional recreational and lodging facilities in keeping with that mission, and for the benefit of the general public,” said Sheridan in an email.