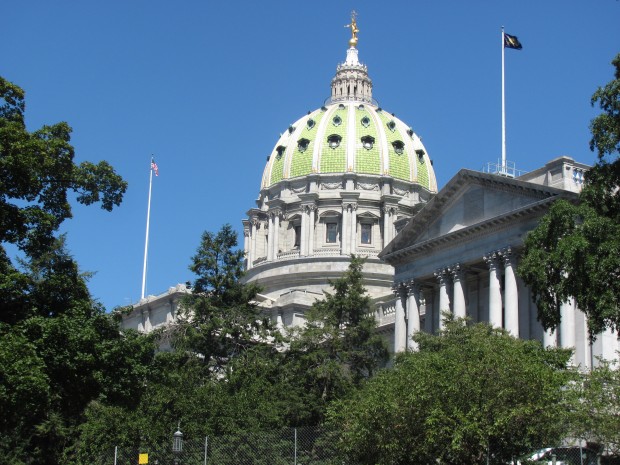 "There's a reason everybody hates oil and gas companies," says Jackie Root, head of the National Association of Royalty Owners PA Chapter. "They got so outrageously greedy."FM

A bill aimed at ensuring oil and gas royalty owners are paid fairly made a fleeting appearance at the Pennsylvania Capitol this week.
“I succeeded in bringing attention to the issue and to the bill,” says Rep. Garth Everett (R-Lycoming), who on Tuesday attached, and then quickly withdrew, his royalties bill as an amendment to another measure that ultimately passed the House and Senate.
In the wake of the Marcellus Shale boom, leaseholders have been complaining for years that they’re getting cheated out of royalty money by some of the nation’s biggest gas drillers. Before withdrawing the amendment, Everett spoke on the House floor and urged his colleagues to support changes to the state’s royalties law. He says the maneuver was simply to raise the profile of the issue.
“I got immediate feedback from the the governmental affairs folks from the Marcellus Shale Coalition and other gas producers,” says Everett. “They disagree with the premise of the bill and said, ‘Why are you doing this again?’ I said, ‘I’m doing this because royalty owners aren’t getting paid fairly.'”
In 2013 the Pennsylvania chapter of the National Association of Royalty Owners (NARO-PA) hired a lobbying firm to push for legislation to clarify the state’s 1979 Guaranteed Minimum Royalty Act, which requires all oil and gas leases to pay out at least a 12.5 percent royalty.
In the wake of the shale bonanza, gas prices have fallen, and many landowners complain they’re not getting paid properly (or at all, in some cases) — even as gas continues to flow from the wells.
“There’s a reason everybody hates oil and gas companies,” says NARO-PA president Jackie Root. “They got so outrageously greedy. If they can’t operate profitably, they should shut the wells in.”
Neither the Marcellus Shale Coalition nor the Pennsylvania division of the American Petroleum Institute would comment. Drillers have previously argued the bill could violate the state constitution by changing the terms of existing contracts they have with landowners.
Despite a failed attempt to get a different royalties bill passed last session, Everett says he’s pressing on with HB 1391, which has substantially different language. He is meeting with House Majority Leader Dave Reed (R- Indiana) next week to discuss it, but doesn’t expect it will advance before next fall.
Reed’s spokesman Steve Miskin says it has been hard to find common ground on the measure.
“It’s very important to members up in the northern tier and the western part of the state where drilling is occurring,” says Miskin. “But it’s proven very difficult to reach a consensus, even among those members.”
Root remains optimistic Everett’s latest bill may be gaining some legs, but says her frustration is mounting.
“They need to get off their arrogant high horse,” she says of the gas drillers. “I just can’t believe they would be allowed to take all the gas from beneath Pennsylvania and not pay the royalty owners.”

This story has been updated to reflect the following correction: Jackie Root was referring to the gas industry getting off its “arrogant high horse,” not the state legislature.