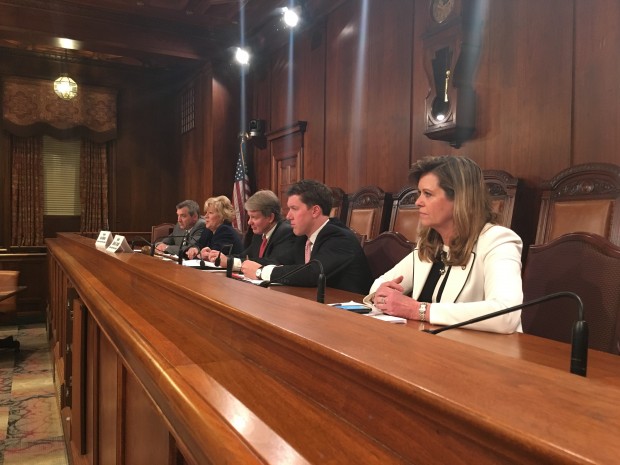 A state senate panel discussed economic development and the permitting process in Pennsylvania.

One of the chief complaints from Pennsylvania’s top environmental regulator, John Quigley, is that he doesn’t have enough staff and resources. At a state senate hearing Monday on economic development and permitting, he repeated it.
“We have 671 fewer positions than we did 7 years ago,” Quigley told lawmakers. “Inadequate staff and technology hamper the agency’s ability to handle the volume of permits.”
The state Department of Environmental Protection recently pulled statistics on 2,592 permit applications it received between 2013 and 2015, and Quigley says nearly 40 percent were technically deficient in some way.
“The regulated community– which is not getting its money’s worth from its consultants– must do better,” said Quigley. “DEP must do better too.”
Sen. David Argall (R- Schuylkill) questioned whether more people would really make the agency run more efficiently.
“How can we be sure if we allocate additional dollars for additional staff the situation will improve?” he asked. “You can certainly understand the fear that more staff equals more bureaucracy, which equals more delay, not less.”
Earlier the panel had heard from Pamela Shupp, who heads the Pennsylvania Economic Development Association. She told them one of the best ways the state can incentivize business is to create streamlined, predictable, permit review processes.
“Excessive permitting timelines and onerous regulations– associated with various state agencies– result in increased project timeframes and costs, impairing economic growth and job creation.”
Quigley said he doesn’t think the state’s regulatory climate negatively effects economic development, and he believes some regulations ought to be stronger– particularly when it comes to the oil and gas industry.
“If the Commonwealth wants to join a race to the bottom when it comes to environmental protection, it does so at its own risk,” said Quigley. “I was mayor of Hazelton– a community that’s still caught in the bust part of the boom and bust cycle. A degraded environment is not conducive to economic development.”
Sen. Camera Bartolotta (R- Washington) represents an area in the southwestern part of the state with a lot of Marcellus Shale drilling and coal mining.
“It’s pretty vital to me that we don’t over-regulate.” she told Quigley. “I’m trying to figure out why it takes so much longer to get permits for just about anything from our southwest office.”
He told her the workload in the DEP’s southwest regional office is the highest in the state.
“There are geographic differences across the Commonwealth. You’ll never get to the point where it is a cookie-cutter approach,” Quigley told her.
He said DEP is currently working to create a more consistent approach across its regional offices. Bartolotta suggested the agency should also use outside firms to review permits.
“I think that would speed things up tremendously,” she said. “If we had third party review with professional consultants, versus some of the folks at DEP that are overwhelmed. They have so much on their plate. Many of them aren’t really professionals in particular fields.”
Quigley said he strongly disagreed with that idea.
“We have the most proficient, technically capable staff that you’ll find anywhere,” he said. “The protection of public health and the environment is not something you can outsource.”

Fracking is becoming a big deal in the Democratic Senate race