DEP wants upgrades: 'We do not have Wi-Fi' 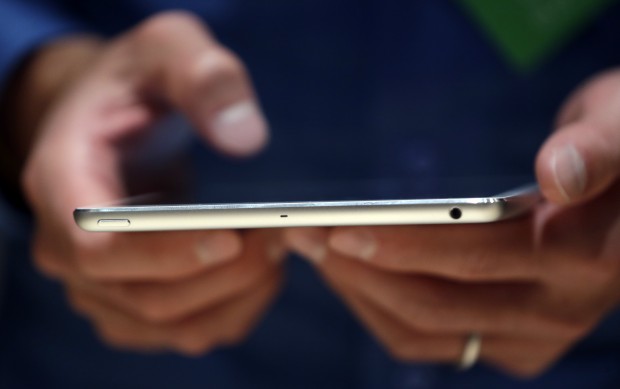 The state Department of Environmental Protection wants to make some upgrades, including getting Wi-Fi, iPads, and faster internet.

Throughout Pennsylvania’s natural gas boom, state environmental regulators have been behind-the-times when it comes to technology.
As head of the state Department of Environmental Protection, Secretary John Quigley often complains that gas workers get to carry iPads in the field, while his staff is stuck with paper and clipboards. One of his top priorities is to bring the agency into the twenty-first century.
Nearly a decade after Apple launched the iPhone, DEP staff is just now getting permission to add apps to their government-issued iPhones.
This is good news for Scott Perry, who heads the agency’s Oil and Gas bureau. He says for example, inspectors at gas sites can now use apps to help them with their jobs.
“So our folks could put decibel meters on their phones and understand if they’re dealing with a noise problem,” says Perry.
Sitting in his office on the top floor of the Rachel Carson Building (DEP’s Harrisburg headquarters), he sees more positive changes on the horizon.
“We’re looking at putting Wi-Fi in this building,” he says. “We do not have Wi-Fi.”
DEP Secretary John Quigley says no one ever pushed for it before.
“There has been such a turning away from technology over the last decade in the agency because of budget cuts,” he says. “Just relentless year-after-year budget cuts.”

He’s not the first secretary to notice problems. His predecessor, Chris Abruzzo, who was appointed by Republican governor Tom Corbett, publicly complained the agency’s website looked like, “the Encyclopedia Britannica,” when he took over. “It did not engage the public. We’ve tried very hard to overhaul that website.”
But what use is a good website, if you can’t connect to the internet?
At a state senate budget hearing last week, Quigley told legislators the DEP has a major problem at its six regional offices around the state.
“It takes minutes, sometimes hours, for web pages to load—if they load at all. Just horrendously slow internet service,” says Quigley. “We’re in the process of fixing that. That will probably save employees an hour a day on average.”
Sen. Scott Wagner (R- York) was not happy to hear that.  He told Quigley the department should try to throw its weight around– literally.
“Have you slapped your [internet] provider around?” Wagner asked. “I’d be happy to come over and slap them around. You gotta slap them around.”
Sen. Bob Mensch (R- Berks) agreed DEP was stuck in the technological past.
“I was on a conference call the other day with one of your locations and we had a speaker phone on and I actually heard a dial-up modem,” he told Quigley. “In 2004 that was obsolete, let alone in 2016. So I feel your pain.”
The lack of investment in IT means the private sector is light-years ahead of regulators.
For example, the gas industry trade group, the Marcellus Shale Coalition built a database a few years ago for water quality data. It’s made up of what’s known as “pre-drill” or baseline test results.  It’s critical information that helps establish whether gas activity could have contaminated a water supply.
The DEP stores that same information in a much less useful way. It’s in .PDF documents on CDs.
“To transition to something different means we need additional resources,” says Scott Perry.
The gas industry allows the DEP to access the database, but Perry says it doesn’t have the functionality he’d like. He’s hopeful the department can eventually build its own database to analyze the information more quickly.
“It really ought not come as a surprise to many people that companies like Shell, Exxon and Chevron have a larger capital budget than most countries, let alone the Department of Environmental Protection,” he says.
In 2014, state Auditor General Eugene DePasquale (D) released a report faulting the DEP for failing to adequately track and respond to public complaints about water quality related to natural gas development. The department disputed all of DePasquale’s findings, but agreed with his recommendations for improvement– which included changes to record-keeping.
DEP recently purchased 147 tablet computers so inspectors can ditch the paper. Quigley believes their productivity could double. Those iPads will still need solid internet connections though.
The department is working on it.

Inside the fight to frack Penn Township