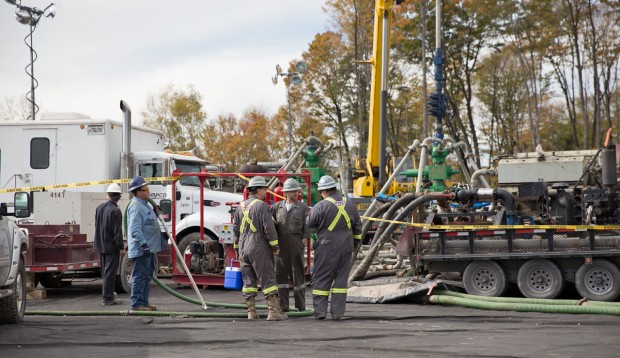 A recently published peer-review of the EPA’s fracking study criticized the agency for reaching conclusions in their draft report without adequately explaining the lack of data and research available, including information related to wastewater, chemical and fuel spills resulting from oil and gas production. The EPA’s Science Advisory Board, an independent group of scientists tasked with reviewing the report, said in a draft review released earlier this month that the EPA failed to address “significant uncertainty regarding frequency, severity and type of hydrofracking related spills.”
The Board also criticized the EPA for reaching conclusions by looking at data from just two states — Colorado and Pennsylvania. But if Pennsylvania is any indication, even that data on spills is severely lacking.
Pennsylvania’s Department of Environmental Protection does have a publicly available, searchable database of gas well violations. The only other state with that kind of transparency regarding oil and gas production violations is Colorado. Matt Kelso, from FracTracker, an organization that provides database analysis on oil and gas activities, says West Virginia and Arkansas provide some information. But most oil and gas drilling states provide no environmental compliance data to the public.
When it comes to water pollution, some worry that surface spills pose a greater threat than the actual hydro-fracking process, which shoots water, sand and chemicals deep into the ground to break up rock and free the gas. The DEP says spills are the second most common problem their inspectors confront, after erosion and sediment control issues.
Although some spills are documented in detail by Pennsylvania DEP inspectors, most of the notes in the state’s compliance report have sparse information, and often lack volume and content of the spill. DEP inspectors have to fill out a form that includes violation codes and other information, and has a section for additional notes. But a review of the Notices of Violations from the past 15 years shows there’s often no volume or spill contents recorded. Spills relating to truck accidents are not listed in the database. Researchers say this makes it difficult to reach any solid conclusions about the number and severity of fracking related spills, and their impact on drinking water.

Searching through the database for the word “spill,” FracTracker’s Matt Kelso identified 409 separate wells where “spill” was marked in the notes. Looking at the details of the violations, some of those incidents did not actually involve a spill, instead the well site may have lacked proper containment structures, which could have led to a spill or possibly resulted in a spill entering a nearby waterway. In that same database, searching for specific violation codes directly related to brine spills turned up 323 unique incidents. About half of those did not detail the contents of the fluid spilled. Given the number of wells drilled in Pennsylvania during the past 15 years, both numbers represent a small percentage of wells with documented spills. Still, from the dataset it’s difficult to determine the environmental impact.
Brian Drollette, a Yale University graduate student and lead author on a recent study published in the Proceedings of the National Academy of Sciences, says the unwieldy database limited his research.
“The information was often so vague,” said Drollette, “that I didn’t know if the spill was a particular fluid, and how it was released into the environment. There’s a lot of information [in the database] but there’s a lot of information that’s not there.” 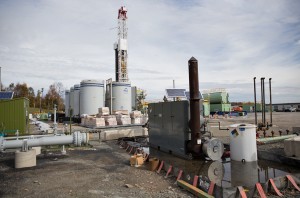 Penn State University professor Susan Brantley has also researched fracking related spills associated with Marcellus Shale drilling but she says she did not rely on the DEP database. Instead she looked for news reports and DEP releases to help compile a list of large spills that may have impacted waterways.
“I always felt like this was ad hoc,” she wrote in an email. “But if after looking
around online a lot, we felt we were getting a sense of the number and volume of at least the larger volume spills.”

Her research concluded that among the large number of shale gas wells in the state, water contamination resulting from spills is rare.

Still, researchers have questions. And the reviewers of the EPA’s fracking report stressed that the impacts were local, and some could be severe.
“It’s a point of frustration because people want to understand the impacts in their area,” said FracTracker’s Kelso. “And if you don’t publish violation data there’s no way to do that.”
Kelso said that although Pennsylvania’s data has flaws, at least it exists. But without data from other states, it’s hard to come to conclusions.
“Is one operator a bad apple in every state? Or is it random? The data is so bad that there’s really no way to tell. So the state of the data becomes the conclusion because there’s not much you can do with it,” he said.
The EPA’s draft report did take a detailed look at one large spill in Pennsylvania that garnered headlines, the November 2010 release of fracking wastewater into the Susquehanna River watershed in Lycoming County that is estimated at between 6,300 to 57,000 gallons. The incident was discovered by a DEP inspector who came upon tanks that had had their plugs removed. Several were empty, but one was continuing to spill wastewater onto the surface. Elevated levels of barium, bromide, calcium, chloride, sodium, and strontium were found in nearby waterways and impacts recorded. But the report says there was no immediate impact to drinking water supplies.
The EPA issued a $100,000 fine to XTO, a subsidiary of ExxonMobile for the incident. The Pennsylvania Attorney General’s office filed criminal charges against the company, which are still pending.
Using DEP’s spill data starting in January 2006 until April, 2012, the EPA was able to identify 87 spills related to hydraulic fracturing, which accounts for only 19 percent of the spills reported in DEP’s oil and gas compliance report during that time period, a clear indication that the DEP data lacked sufficient detail. The agency also looked at three separate studies that used the DEP compliance report data. The report estimates that fracking waste water spills occur at a rate of .4 per 100 wells in Pennsylvania. Spills related to oil and gas production activity, which could include waste water, or other toxic spills like diesel fuel, occurred at a rate of between 3.3 to 12.2 spills per 100 wells.
Dave Yoxtheimer, a researcher with Penn State University’s Marcellus Center for Outreach and Research, says of the EPA’s fracking report that when you’re working with imperfect data, you’ll get imperfect results. He says there could be more information in DEP’s data.
“I think if DEP added [two] more [data] cells we’d know a whole lot more,” he said. “Volume, type of fluid, those are the two that stand out. If we knew that, we’d be able to understand a whole lot more. Was ground water impacted? or soil?”

But that kind of data set could be years away, according to Scott Perry, DEP’s Deputy Secretary in the office of oil and gas management.
“We want to have a system that answers the who, what, why, where and how of spills,” Perry told StateImpact. “We want to know where these things are taking place, the volumes, how this happened…As simple as you think that would be, it’s not.”
The current system, known as eFACTS, was developed in the 1990’s and is no longer supported by the company that created it.
“EFACTS is being used today by members of the public differently than it was designed to be used,” said Perry. “It’s more designed to track what happened at a certain facility. It’s like doing a file review.”
He says it wasn’t designed to help understand the big picture, or to plot out patterns that could be useful in helping prevent future spills. Perry says building a new data management system could take several years.
Secretary Quigley says he’s made data transparency a priority, but he inherited a department that had sustained deep budget cuts over the years, including in information technology.
“We’ve seen a systematic disinvestment in DEP’s information technology,” Quigley said recently on witf’s Smart Talk
He said DEP’s IT budget in 2004 was about $23 million, while today, it’s $16 million.
“Our inspectors go out with clipboards and carbonless paper,” said Quigley. “When folks from the industry use iPads — tap, tap, tap, upload your data go on to the next well.…We’re dealing with antiquated technology, we’re drowning in paper.”
Quigley says he wants the DEP to go paperless in three years. But Scott Perry’s not so sure the compliance data will be updated by then.
“What probably would have helped would have been a severance tax,” said Perry.