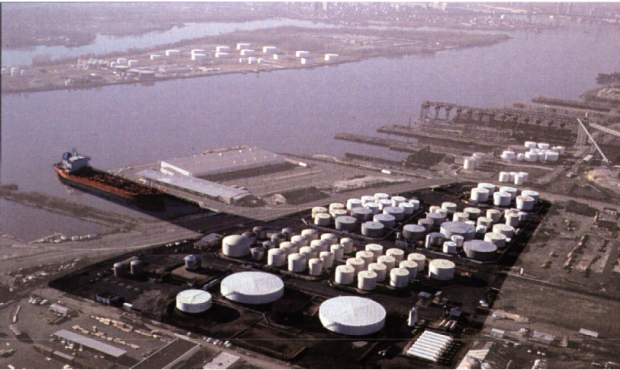 An aerial view of the Kinder Morgan Philadelphia Terminal along the Delaware River.

Pennsylvania Department of Environmental Protection has fined Kinder Morgan $745,000 for violations at the company’s two Philadelphia liquid storage facilities. The bulk of that fine, $570,000, stems from a spill of about 8,000 gallons of fuel grade ethanol from an above ground storage tank at the Kinder Morgan Liquids Terminal along the Delaware river in the Port Richmond section of the city.
The remainder, $175,000, was assessed after a site visit last April by DEP officials to the company’s Passyunk Avenue facility, known as the Point Breeze Terminal, in Southwest Philadelphia. At the Point Breeze Terminal, DEP says the company had allowed storm water to accumulate in containment dykes surrounding storage tanks.
“Whether it be a product release or the failure to follow regulatory requirements, we take our mission to provide for the health and safety of our citizens very seriously,” said DEP Secretary John Quigley in a release. “Economic opportunities must be pursued responsibly, safeguarding public health and the environment. We expect that this penalty will result in strengthened safeguards across the board.”
Kinder Morgan reported the ethanol spill at the Delaware Avenue facility last June to DEP, which says the fuel contaminated both soil and ground water through a failed containment system. DEP says the company also failed to report the spill within the timelines required by state law. Stephan Sinding, Southeastern Pennsylvania DEP’s program manager for environmental clean-up and brownfields, says the $570,000 fine is significant. 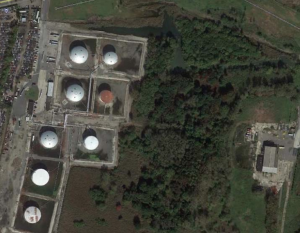 An aerial view of the Kinder Morgan Point Breeze Terminal in Southwest Philadelphia.

Sinding says Kinder Morgan has cooperated with the DEP, and is working with the agency to improve its reporting procedures and containment structures. He says says it’s unclear whether the ethanol made its way into the nearby Delaware River.
“That’s part of the investigation,” Sinding told StateImpact. “Ground water typically flows to surface streams but not necessarily. It depends on the rate of ground water movement. Additionally, the [Delaware] river has a tide and that changes how the ground water flows.”
A spokesman for Kinder Morgan says the ethanol was contained on the site, and did not impact downstream users or adjacent properties, including the Delaware River.
“The company took the tank out of service, investigated the release, and initiated an appropriate responsive and remedial action including notification to all appropriate regulatory agencies and stakeholders,” said Richard Wheatley, Kinder Morgan director for corporate communications.
Kinder Morgan is the largest pipeline company in North America, with 84,000 miles of pipe and 165 terminals transporting and storing a number of energy products including ethanol, gasoline, natural gas, crude oil, jet fuel, and carbon dioxide. The 35 acre tank farm on Delaware Avenue includes 100 storage tanks that primarily contain chemicals and petroleum products. Each tank has the storage capacity of about 300,000 gallons of liquid. The facility serves as part of the company’s Northeast processing and transport hub for energy products moving between Camden and New York City, and is connected to pipelines, rail lines, barge and ship terminals.
The 26 acre Passyunk Avenue terminal houses eight tanks, which store petroleum, gasoline, diesel, ethanol, and biodeisel. It is surrounded by exceptional value wetlands, and is not far from the Schuylkill River. When filled with storm water, the containment structures that surround the tanks cannot collect any spilled fuel, placing nearby waterways in danger of contamination, according to the DEP.
Kinder Morgan purchased the Point Breeze Terminal in December, 2014. Spokesman Richard Wheatley says the previous owner did not notify the company that the Philadelphia Water Department had plugged its storm water discharge pipe. But once the company was aware of the problem, it applied for an emergency discharge permit from the DEP, he said. Wheatley could not say whether the application for the discharge permit took place before or after the site visit by DEP.

No link between fracking and smallmouth bass decline