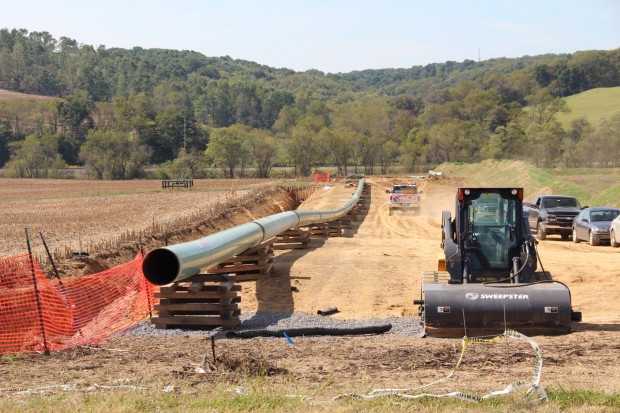 A pipeline under construction in Butler County, Pa.

The number of additional gas pipelines projected for Pennsylvania in coming years was always impressive, and now the number of proposals for how to manage them is equally striking.

Gov. Tom Wolf’s Pipeline Infrastructure Task Force has produced no fewer than 184 sets of ideas for how to reap the economic benefits of the expected massive buildout of pipeline infrastructure while ensuring that it operates safely, doesn’t damage the environment, and involves the public in deciding where to build the lines.

The ideas are the result of several months’ work by 12 committees of federal, state and local officials, gas industry executives, legislators, business people, trade unionists and others who were asked to come up with a set of best practices, and have done so in a 335-page draft report, released on Tuesday by the Department of Environmental Protection.

When the report is finalized to present to Gov. Wolf next February, it may become a blueprint for development of as many as 30,000 miles of new pipeline that the DEP expects to be built over the next 20 years to take abundant Marcellus Shale gas to market.

The total length of gathering lines is expected to at least quadruple by 2030, occupying some 300,000 acres, or 1 percent of the state’s land area, and exceeding the area occupied by all other Marcellus Shale infrastructure, the report said. It warned that hundreds of compressor stations will be built along the new pipelines.

“All told, this pipeline infrastructure build-out will impact communities and the environment in every county in Pennsylvania,” the report said.

The report, headed by DEP Secretary John Quigley, justifies the task force by noting that even though Pennsylvania is now the second-biggest U.S. producer of natural gas, about a third of its reserves are shut in because of a shortage of pipelines to transport the gas.

“So the primary challenge the industry faces now is to get the gas around or out of Pennsylvania to connect it to customers,” the report says.

It called for “smart planning” that would coordinate the work of different stakeholders such as landowners, communities and state agencies to protect sensitive lands and habitats. One of the greatest barriers such a joint approach is that no single state or federal agency is responsible for pipeline permitting, and permits are not reviewed for cumulative impacts on a landscape level, the report said.

The long list of ideas in the report range from the technical – “Use Dry Seals for Centrifugal Compressors” to the ambitious – “Minimize Methane Emissions”, the obvious – “Avoid Dams and Reservoirs” — and the bureaucratic – “Establish Early Partnerships and Coordination With Regulatory Agencies.” Several work groups called for mapping of pipelines.

Some proposals would depend on a daunting combination of budget allocations, legislative approval and the cooperation of multiple federal, state and local agencies. 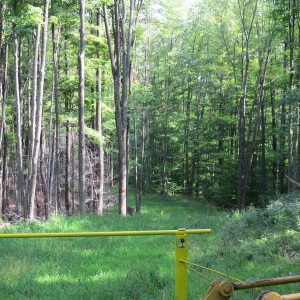 A natural gas pipeline snakes through the Susquehannock State Forest in Potter County.

A proposal by the Conservation and Natural Resources work group, for example, would establish a “mitigation bank” that would set aside land as an offset for land that has been cleared to make way for a pipeline. The report acknowledges that the plan would need the approval of five state and federal agencies and relevant local authorities.

Another recommendation by the Natural Gas End Use work group advocates creating an Energy Opportunity Zone as an addition to existing Keystone Opportunity Zones, to provide incentives for users of natural gas. Without giving specifics, the report lists “legislation” and “budget” as the two challenges facing the proposal, and it acknowledges the plan would involve four state agencies including the Department of Revenue.

DEP Secretary Quigley said the Task Force will consider all proposals and include some or all of them in its final report to Gov. Wolf. In an interview with StateImpact, he called some of the proposals “ambitious” but rejected a suggestion that some were unrealistic. “I haven’t seen much in that first draft that isn’t ultimately achievable,” he said.

He defended the Task Force as one of Pennsylvania’s biggest exercises in public consultation. “I’m very comfortable with the level of inclusion and broad representation that is reflected in the Task Force, and the integrity with which we have conducted the process, he said. “We have web cast every single meeting, and made every single document in this process available to public in real time. So we have been completely transparent.”

Asked to respond to criticism that the Task Force is failing to address whether pipelines are needed in the first place, Quigley said that issue was outside its mandate.

“We’re not having that conversation, that’s not what the task force is about,” he said. “We live in the real world, and we have to deal with the problems that are confronting us. We know that there are billions of dollars of investment being planned in this state for pipeline infrastructure. The conversation about what could happen, the conversation about energy policy is not for this task force.”

There is no doubt that the pipelines will be built and the question now is how to manage that process, Quigley said.

“The question is how is it going to be built?” he said. “What kinds of precautions, what kind of planning are going to go into that development process?”

Meanwhile, some of the Task Force’s other proposals such as “Minimize Impact on Local Roads” and “Require Leak Repair Schedules” are likely to be uncontroversial, even among opponents of the gas industry.

Mike Helbing, a staff attorney for the environmental group PennFuture, welcomed proposed environmental safeguards such as “Minimizing Water Withdrawals for Testing” but acknowledged that some measures were unlikely to be implemented because the work groups were charged with identifying best practices rather than those that are likely to become a reality.

He praised the report’s calls for no net loss of wetlands and forested headwaters but said it remains to be seen whether such measures will be retained in the final report. “There’s a lot of really good things in there but there’s still a long way to go,” Helbing said.

He said the task force was asked to state best practices that may not be implemented. “I’m not sure that the report was limited to those things that are readily achievable in the political world,” he said.

Joe Minott, executive director of the Clean Air Council, argued that, despite its comprehensive approach, the report failed to include meaningful public participation, and did not ask the fundamental question of whether some pipelines are needed in the first place.

“Right now, everyone is rushing to build a pipeline but no one is asking whether we need the pipeline,” Minott said.

To have a meaningful degree of public participation, pipeline planners should seek community input before planning a line there, rather than assuming from the outset that it will be built, Minott said.

And Maya van Rossum, head of the environmental group Delaware Riverkeeper Network, said the report failed to ask whether the huge buildout is necessary in the first place.

“The report is based on the false premise that all of this shale gas and its pipelines are needed or wanted rather than conducting a genuine assessment of need in the context of how to best serve the energy needs of the present and future generations,” she said.

Van Rossum, whose group is among those calling on Gov. Wolf to shut down the task force, said he should have spent state resources on a clean-energy task force instead.